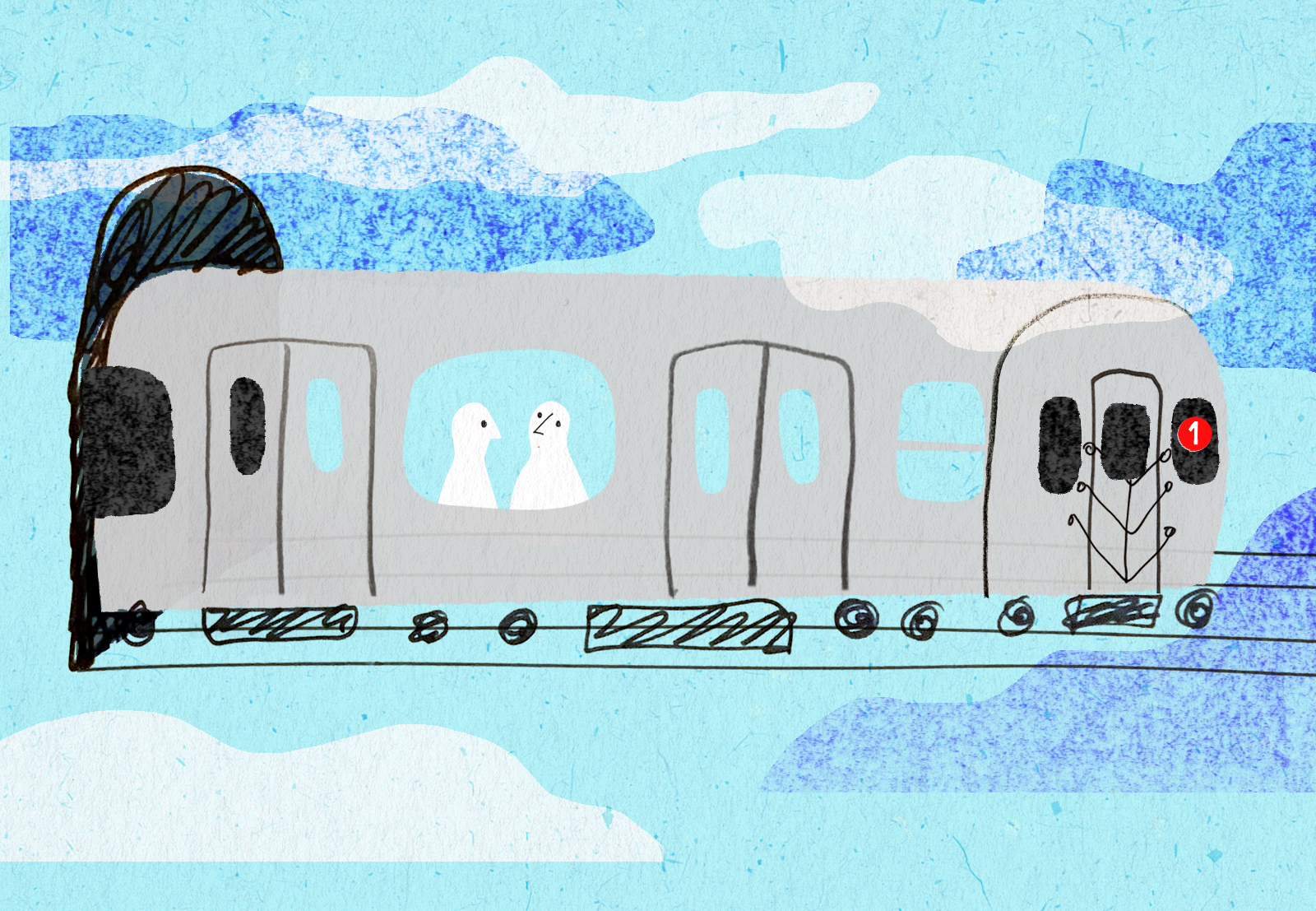 One evening in February, we were sitting on my bed exchanging stories about our afternoons. While he had taken multiple subways to get to me that day, I had only ridden the train to and from Trader Joe’s, but both of us had had wild subway rides. I was recounting a funny conversation about grocery bags I’d had with a stranger on the 1 train, when he laughed to himself and shook his head, then looked up at me and asked, “How do you do it?”

“Make this city open up for you.”

This sentiment—that I have some unique way of making Manhattan my own—has always flattered yet confounded me. It was a first impression that quickly turned into a conviction, and one that he maintains to this day. He cites “magical” interactions we’ve had with people on the street, but I insist that New Yorkers are simply friendlier than their reputation suggests. He points out the confidence with which I walk (read: sneak) into hotels to get onto their rooftops, but I object, saying that’s just a trick I learned from an old friend.

I can take the compliment, of course. It’s always nice to feel that a partner sees something special in you, perhaps something that even you hadn’t noticed about yourself. But the sense that the city opens up for me is something I fail to feel certain of, mostly because it’s always felt more as if the city is opening up for us. (Admittedly cheesy, yes, but there are some stories I can’t make up.)

One night last January, we were trying to catch a movie starting in 15 minutes, but we were 20 minutes from Film Forum and already clocked into the wrong subway line. I asked a nearby MTA worker if we could get to the 1 train without swiping back in again, but he just smiled sympathetically and shook his head. Both of us drama queens, we leaned against the wall of the subway station contemplating what to do next. Should we run through pouring rain to another station, spend another $5.50 between the two of us, and still risk missing the movie?

We were about to throw in the towel when the MTA worker returned and motioned for us to come with him. He led us to a door for Authorized Personnel Only and swiped his key card. We followed him underground for about 10 minutes, grinning in silence and darkness, and then emerged at the 1 station. The MTA worker ushered us through the emergency exit doors, speaking for the first and last time: “You kids have a great night.” We raced down to the platform, slid between the closing doors, and sighed into each other. (Most importantly, we made it to the movie.)

That story certainly evokes serendipitous, romantic, I-heart-NYC feelings, but it’s also indicative of the one real hardship we faced in our first months together: commuting. The school year had been filled with time on the subway; while him jokingly calling me “Uptown Girl” helped, as did rapping the lyrics to A$AP Rocky’s “1 Train,” the commute added up in time and money. Dating outside the Columbia pool isn’t unheard of, but it didn’t take me long to figure out why many consider it an endeavor. Leaving the bubble every once in a while for a no-strings-attached, occasional hookup is one thing. Committing to someone outside the bubble is another. At times it felt like I was in a long-distance relationship, despite the fact that we were less than six miles apart—a length most long-distance couples would scoff at.

After seven months of back and forth trips between Harlem and East Village, the pilgrimage was beginning to seem normal. Commuting meant exploring the city, and the journey was sometimes as fun as the destination. But spring’s arrival meant the search for next year’s housing. When he told me that he and the guys had looked at an apartment in Bed-Stuy, Brooklyn, and excitedly texted photos, I tried to focus on the charming details of it all. The baby blue walls; the skylight in the living room; the balcony off each of the four bedrooms. The mere existence of a four-bedroom apartment that he and his friends could afford.

Still, I couldn’t help but worry that the move meant doubling the commute between my place and his. I kept thinking of that Friends episode, “The One With the Girl From Poughkeepsie,” in which Ross has to choose between two women he’s dating: mediocre and nearby or fantastic and upstate.

The only way to combat my fear of the distance was to attempt the commute firsthand, and I ended up getting a trial period this summer by living in the Bed-Stuy apartment without him. While he was home in Colorado, I learned the intricacies of commuting between my job in Manhattan and my temporary home in Brooklyn: which transfer to take at which hour, how to navigate the labyrinth that is Fulton Street, and how to tell when the J train just isn’t going to come.

In the end, I discovered that if my monotonous summer internship was enough to keep me going the distance between boroughs, then my boyfriend was more than enough. Leaving the bubble has meant that the city has, literally, opened up for me. So what’s another half hour or so on the train?

On that note, I’ve been thinking of getting more into podcasts this fall, so if anyone has any recommendations, definitely let me know.

The author is a Barnard College junior studying Spanish and art history.