I ate alone and the world didn’t end

I ate alone and the world didn’t end 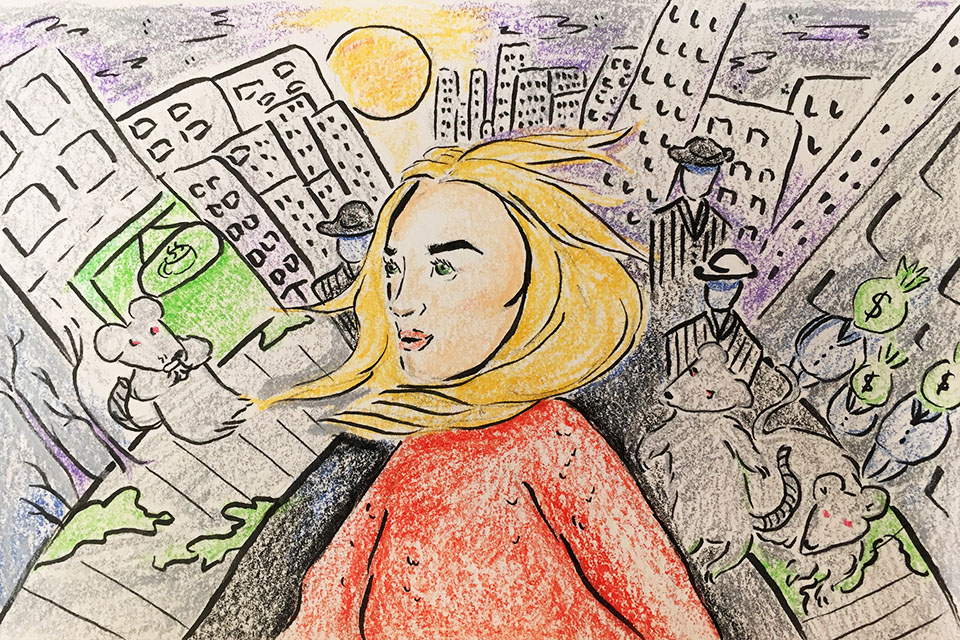 I think one of the best places on campus to learn important life lessons is in a Carman elevator. It was during one of those infamous, impromptu elevator chats with an acquaintance that I was reminded of something important, something that I had known but had conveniently forgotten the second I stepped on campus for the first time.

“Yeah, I went to a museum this weekend. Really great exhibits, spent, like, hours there.”

A shake of the head and a small laugh, then, in an effortlessly cool followup: “I went by myself. It was great.”

First reaction: the mental equivalent of a double take.

Second reaction: Oh, right. You can do that. Huh.

A couple days later, I was walking home from Hamilton with a friend when the prospect of eating alone came up in conversation. She proudly proclaimed that not once had she done so—a friend, a roommate, a passing stranger could always be grabbed at the last second. This was followed up with a more sheepish confession: “I could never, you know?”

I’ve eaten a few breakfasts alone before (8:40 a.m. classes, am I right?). It’s been fine—good, even. I just grab my Iliad or my half-completed essay and read or pretend to be thinking very hard about writing. It’s actually kind of nice to have some quiet time to just be by myself and watch the world go by. But despite having done it several times since the semester started, the idea of seeming alone in public is scary to me. Not being alone, exactly, but looking like I am alone to a third-party observer. I shouldn’t care so much about what it looks like to others, I know. But I do.

The move to college is a long, strange, terrible, amazing one. There’s no house with parental figures, siblings, or pets wandering around anymore—not until Christmas, anyways. You’re so much more aware of how much more of an individual you are. As individuals, we all have to deal with the physical manifestation of our individuality—our aloneness—at one point or another.

There’s a high school and college (or millennial, depending on who you ask) phenomenon called the Stanford Duck Syndrome, or less commonly, Penn Face. Basically, as a blogger explains it, the syndrome entails “everyone on campus [appearing] to be gliding effortlessly … But below the surface, our little duck feet are pedalling furiously.”

We’re obsessed with being perceived as able to handle it all. We can’t let on that we’re working hard, doubting ourselves, struggling, or worse, failing at anything, because nobody else seems to be. So appearances are, however desperately, kept up. Projecting the best and expunging the worst bits of life via Snapchat and Instagram doesn’t help much, either.

Stanford Duck Syndrome was created mainly with academics and extracurriculars in mind, but we need to spend more time applying it to social contexts. Columbia students really care about their image. It’s not so much “trying to be cool” as it is “trying not to seem uncool.” It’s not just a first-year experience, either, I’ve been told—upperclassmen are likely to be just as self-conscious about shuffling into Ferris alone and having to wonder if that big group of eighteen-year-olds is judging them.

Attending a university with literally 10 times the number of students that I was used to is both a revelation and a maddening experience. Possible permutations of close friends and casual acquaintances stretch on to infinity. But—and here’s the kicker—you have to be in exactly the right place at exactly the right time to make it work.

Especially at the beginning, when everything is shiny and scary, it feels like staying in your room for even one second could cost you the chance encounter that will change you forever, setting you on a completely different life path. You’re left wondering who you might be laughing over lunch with had you swiped into Lerner thirty seconds earlier. What opportunities are you missing out on, which people are you not meeting, because you’re doing exactly what you’re doing, right now? It all comes back to Stanford Duck Syndrome—wanting to appear like you’ve got a handle on everything, having the foresight to have picked the absolute best thing there is to do, to have found the absolute best people there are to meet.

Of course, none of us (I hope) are omniscient like that. So life will occasionally work out in that vaguely annoying way where you’re forced to confront the fact that, yes, we all have to be alone in a crowd sometimes. But if you eat lunch by yourself once or go to a concert solo, everybody else might realize you’re human! That you might want space to yourself occasionally! That’d be a real disaster.

And as a (semi-)functioning, almost adult, meals alone are inevitable, for better or for worse. So are meals with friends. Meals with friends who will become strangers, and strangers who will become friends. I don’t yet have the benefit of hindsight as to whether I’ve made the best choices in regard to the chaos theory of social life, but one day I will. I don’t think I’ll have regrets or be disappointed. In the meantime, I’m off to lunch.

AJ McDougall is a Columbia College freshman hoping to major in English, or history, or human rights, or anthropology, or political science, or possibly all five. She always forgets to swipe extra apples from Ferris, so any and all donations are appreciated. You Have My Word runs alternate Wednesdays.