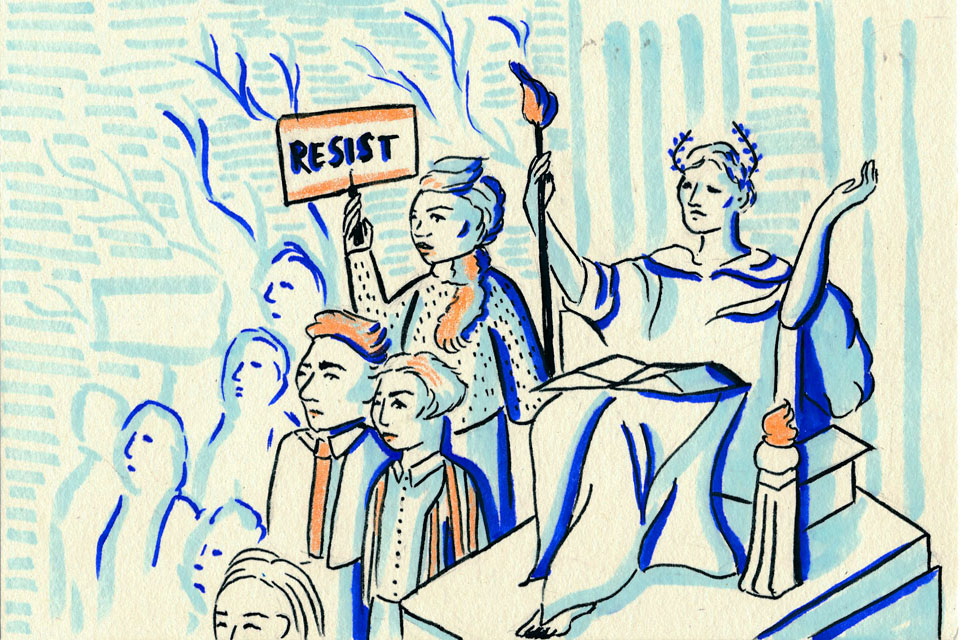 The state of the debate on the right to free speech is, at best, contentious right now. (At worst, it’s a shitshow.) It’s not just the guy declaring, “It’s a free country, bro!” as a thinly veiled excuse to be -ist or -phobic anymore. If it’s true that college is a microcosm of the real world, then contradictions and ambiguities about what exactly constitutes fair free speech are just as prevalent out there as they are here.

Columbia’s long, sometimes proud, sometimes inglorious history of protesting for what we believe in has, for better or for worse, shaped the school and its students from the inside out. We’re provocative—according to some, overwhelmingly so. So why bother? Maybe it only serves to alienate those who are undecided or moderate about our point of view. Maybe it’s none of our business. Maybe it does more harm than good.

Obviously, our students are far from the only ones around the country who have been—depending on your point of view—marred or martyred for speaking out against what we believe to be wrong. But we are very, very well-known for exercising our First Amendment rights—it’s one of the reasons I chose Columbia.

Now more than ever, Columbia and other liberal arts colleges need to stand firm on the right to protest and speak out against social injustices and morally bankrupted agendas. But the diametric opposition between being on a campus both where the president teaches a class on freedom of speech and the press and the administration has threatened suspension for sit-in protesters in the past gives me pause. Because the latter action is a little too familiar to me.

From the time of my sociopolitical awakening—concurrent, I think, with the start of Obama’s first term—I avidly watched as people across the globe gathered and protested what they believed to be wrong. All kinds of rapid and electrified responses caught my attention: I saw marches against unfair labor practices on television, heard about sit-ins protesting police brutality on the radio, and read articles on boycotting corporations that contributed to environmental damage. And I sent the protesters good thoughts, because I couldn’t do much more, legally.

My lack of participation came not from choice, but rather from growing up in Singapore, a country where our rights to free speech are severely limited. It’s easy to forget that in many places, free speech is not the first priority when it comes to upholding a constitution.

It’s not necessary, if you’ve never spent any time in Singapore or other countries like it, to picture Big Brother posters or book burnings. Rarely does anything outright repressive occur, like it often does in other countries.

But at the same time, it isn’t exactly an environment conducive to free thought. Whereas it’s not uncommon at Columbia to hear students or teachers publicly and confidently ragging on the sitting president, in Singapore you might voice your personal dislike of the ruling political party at the lunch table, and your friends will shush you, mostly jokingly. You might sometimes hear people refer to Singapore’s political system as a “benevolent dictatorship.” After all, our constitution does, in theory, promise freedom of speech.

The restrictions on that freedom, however, are what have placed Singapore on the lower end of Reporters Without Borders’ World Press Freedom Index, at spot 151 out of 180 countries. Our seven domestic TV channels are broadcast under government control. Radio and print journalists practice self-censorship to avoid making trouble. Singapore’s rules are unwritten and clear: Criticize whatever you want‚ just not to an audience and not on a platform. The government isn’t bluffing, either.

Back in 2015, 16-year-old Singaporean Amos Yee posted an eight-and-a-half-minute video calling the recently dead president Lee Kuan Yew a “horrible person” whose legacy would make people afraid to criticize him and called him a dictator, while also taking swipes at organized Christianity and Islam. He was arrested under a section of the penal code that forbids “wounding the religious feelings of Christians.” (How’s that for snowflake syndrome?) As a result, Yee spent 53 days in detention, almost underwent mandatory psychological treatment, and was finally released under a 20,000 Singapore dollars (roughly $14,000) bail. He was found guilty, handed a SG$2,000 fine (roughly $1,400), and sentenced to four weeks in jail.

A lot of Singaporeans rolled their eyes and told each other that the kid should’ve known better. He probably should have. He was a troll—but does that mean that the government’s response was a proportional or adequate one? Of course not. Imagine the secretary of defense patrolling Youtube comment sections. It’s an impossible and frankly ridiculous task. Yet the controversy with Yee was just one of many that Singapore has experienced in the last few years.

Coming to Columbia was like jumping into a community pool of cultural education and ideological debate after staring at it from the comfort of a deck chair for 18 years. And yet, Columbia’s relationship with free speech was and continues to be fraught. From the arrest of 700 students on the first night of the infamous 1968 protests to the administration’s response to Orgo Night back in 2016, it sometimes seems to me that our microcosmic responses to protests are too reminiscent of a country where free speech isn’t protected. But, on paper and in practice, we’re still allowed to speak freely in the first place.

Prior to moving to the United States, I had never marched or held a banner. Being able to publicly support the causes I want to fight for is now a reality. Political and social apathy isn’t an option, because I think we have to approach it from the perspective that it’s not only our right or our privilege to protest—it is our obligation. In Singapore and many, many other countries, we don’t have the same First Amendment rights of speaking up against administrations we disagree with or hate without landing in hot water. Why be provocative? Because we can.

AJ McDougall is a Columbia College freshman hoping to major in English literature and really prove the 9th-grade teacher who gave her a C on her Macbeth essay wrong. She can also hold the hell out of a poster-board sign. You Have My Word runs alternate Wednesdays.