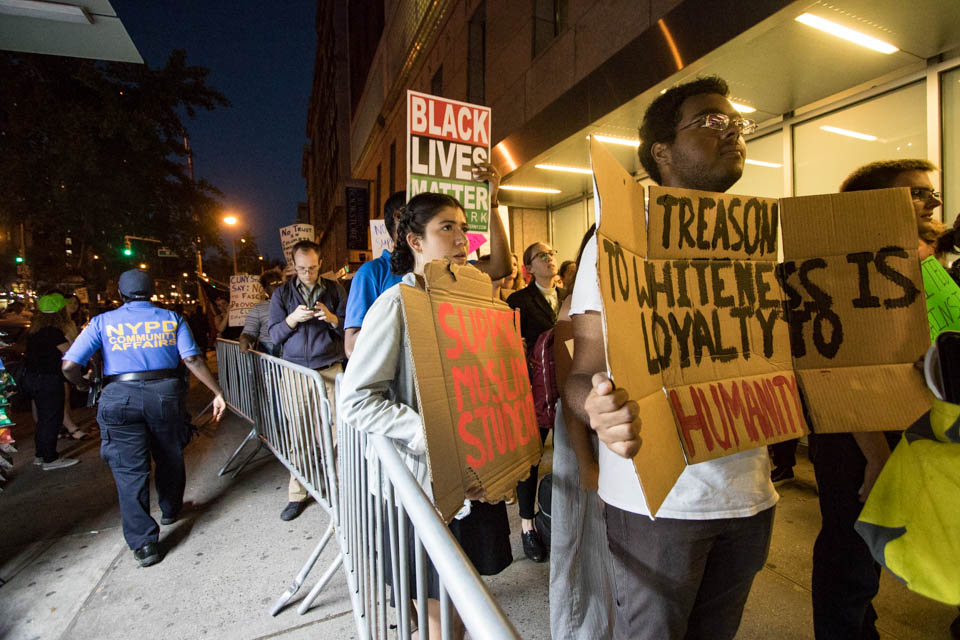 I attended the controversial Tommy Robinson event at Columbia on October 10. That night, I was embarrassed to be a Columbia student.

First, let me tell you why I went to this event. I am not part of Columbia University College Republicans, but I do value free speech at universities—especially at Columbia, a university that started the Knight First Amendment Institute in 2016 and had Iranian President Mahmoud Ahmadinejad speak on campus in September 2007. Freedom of thought, expression, and belief are important to me not only because I believe in our Bill of Rights and the First Amendment, but also because it is crucial to understand your adversaries and their arguments. It is also important to recognize that extremist nationalist movements are gaining traction around the world. For instance, the AfD party, an anti-Muslim, anti-immigration, far-right nationalist party, just won seats in the German Parliament, making it the third-largest bloc in the legislature. Now is the time to understand why these groups are gaining momentum and how to combat them. We must also be cognizant of the spectrum within political ideology, especially since Republicans and conservatives are challenging Trump in defiance of their own party.

Universities should be places designed to introduce you to ideas you wouldn’t otherwise engage with. I attended the CUCR event to understand how someone from the far right thinks and to figure out how to address political extremism. I wanted Robinson to explain why he left the English Defence League, since he claimed he was “concerned about the dangers of far-right extremism.” I came prepared with researched questions that I hoped would shed light on flaws within Robinson’s ideology. I wanted to stump him in an environment conducive to productive discourse and not give him the opportunity to bash the left or call me a “snowflake.”

I tried to engage—but I wasn’t given the opportunity to do so because of disrespectful protesters.

I absolutely support your right to protest. I understand you don’t respect Tommy, and you probably shouldn’t. But through this method of protesting, you disrespected me too—a fellow student and advocate. As you value your right to protest, I value my right to free speech. But my right wasn’t respected. I don’t believe in screaming for the sake of drowning out the voice you disagree with. I believe in action.

Listening might be a good first step. For example, victories were achieved in health care reform through bipartisan cooperation. Senate Minority Leader Chuck Schumer (D-NY) said he wanted to begin working with Republicans to try and combat the policies of the Trump administration. While far-right speakers are more extreme than the typical Republican, there are a lot of people in between Tommy Robinson and his protesters. The time and energy that went into the protest could have been put into a counter event in which a speaker would break down Robinson’s points and fact-check his statements. That is the First Amendment at its core. Speaking with is better than speaking over.

During the event, I heard questions about DACA and the Las Vegas shooter. A focus on the specific issues at hand—Robinson’s stance on mass migration and his hateful ideology—could have been more productive. Protesters, please do your homework. If you want to make an impact, it’s vital to be specific in what you are addressing and make people understand your grievances to facilitate discourse. Don’t succumb to groupthink.

Moreover, I heard students cursing out CUCR, saying that they were infringing on the safety of certain students on campus. I have to ask: To what degree did you really feel unsafe that night? Tommy Robinson was on a Skype call and barely got a chance to speak.

In honesty, I felt unsafe. I was called a white supremacist, Nazi, and people yelled “fascist” in my face for attending the event. Ironically, I am not even white or a Republican, let alone a fascist. Attending this event was like putting a target on my back even though I was just there to question the speaker.

I understand that safe spaces entail more than physical safety, but, quite frankly, not all situations warrant a safe space, nor should they—there are people like Robinson everywhere and it is imperative to create a dialogue with people who hold ideas similar to his, to combat them before they gain large support. Columbia says it values diversity of thought, and Executive Vice President of University Life Suzanne Goldberg sent out an email that stated student groups have the right to hold events such as this, though the University does not support the views of the speaker. Yet, why was there inaction when protesters began to interrupt the speaker during the event? In 2006, Columbia issued a statement that said, “We defend the right to peaceful protest and expression of opposing views. But it is never acceptable for anyone to physically take to a stage and interrupt a speaker.”

I know why students were present and protesting. Of course I do. Tommy Robinson offends and threatens many black and brown bodies with his rhetoric. But if you don’t understand how someone begins to think like this, you will never understand how to stop it and how to make sure political parties do not arise out of such rhetoric.

Let me put it like this: Donald Trump is president. Did anyone at Columbia think that would happen? Political science experts didn’t even predict it. The liberal skew in many classroom discussions is emblematic of why. You can’t have a conversation about the other side without being labeled as a proponent of that side.

We are Columbia students. We are supposed to be engaged intellectuals, figuring out how to solve the toughest problems our world faces. This past election, we failed to understand the white, working class that voted for Trump. We failed to understand the extremists that so vehemently supported the Muslim ban and the building of a wall. Because we failed, they won. We call “the other side” ignorant, but when we refuse to have a conversation, maybe we become the ignorant ones.

The author is a junior in Columbia College studying political science. She is a board member for Women in Law and Politics and will be applying to law school next year.