Between friends and acquaintances

Between friends and acquaintances 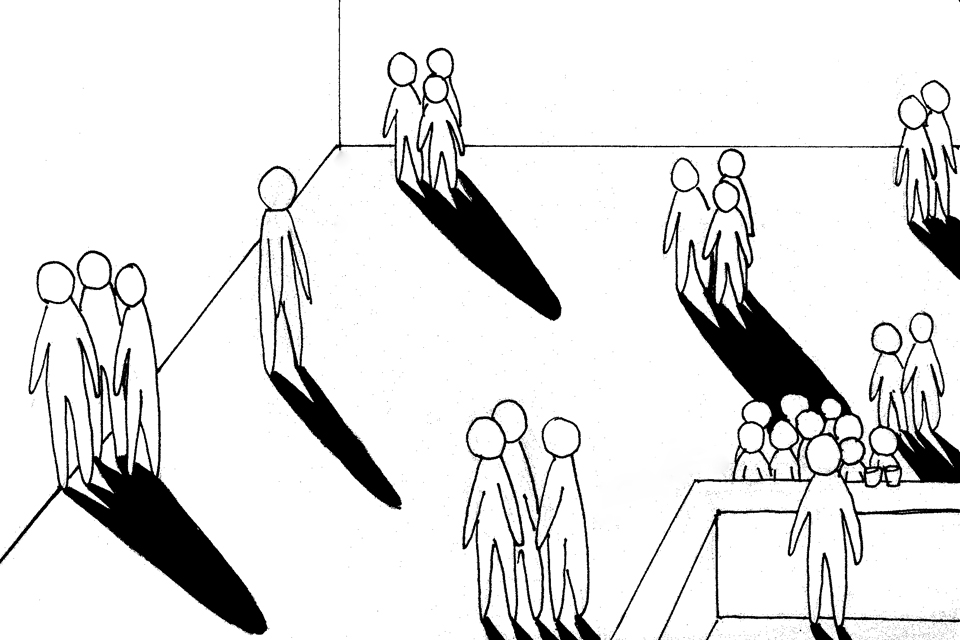 I made my first friend at Columbia during Days on Campus, and for the entire weekend, we ran into each other everywhere: There he was on the double-decker tour bus, a few rows behind me, and at lunch in John Jay, across the table. On a mandatory tour of Morningside Heights, we talked in the back of the pack as our frat boy guide led us around the neighborhood.

Two months later, I came back to campus for Columbia 101—that event over the summer where you get your copy of the Iliad—and I happened to sit next to him as we listened to some wrinkly alumnus wax poetic about the wonders of Lit Hum. In August, we ran into each other during COÖP move-in and played icebreakers and lawn games.

And then NSOP started, and I never saw him again.

He still goes here—I had to do some Facebook stalking to confirm—but I couldn’t have known that given our past three years of silence. Yet there he is, in all his Facebook photos, hanging out with one of our 66 mutual friends, studying abroad, living a kind of parallel existence that never seemed to cross paths with mine the same way it had in the spring of 2014.

That, in a nutshell, is what I’ve felt most relationships are like at Columbia. You meet someone, you get along well, and maybe you hang out once or twice. If you’re lucky, you’ll see them again. And if not, well, then they end up joining that mass of people walking around campus who fall somewhere between “friend” and “stranger”; between “I know them” and “I know of them.” At worst, they disappear entirely.

You’d think that would change senior year, that being around campus for so long would allow me to turn those strangers into friends—or, at least, get me more comfortable with the idea of sharing my time in college with a horde of acquaintances. But I look around at my 200-person lecture, or at the sweaty clumps of people at senior night, and I realize that a lot of them are just like that guy from Days on Campus: They were in that discussion section, or went to my high school, or hung out with me at a party once—and have since faded into a kind of social oblivion.

There’s a cognitive theory called Dunbar’s number, which says that you can only maintain friendships with about 150 people at any given point in time. If you divide that number by three, the resulting group of people is closer to you—you can keep something like 50 close friends, 15 intimate friends, and so forth—and multiplying by three will take you one step further away socially.

I’m no psychology major, but I would venture to say that life on a college campus doesn’t quite match this theory, at least when it comes to that circle of 450 acquaintances. When you fit all those people into an area equivalent to 20 city blocks and keep mixing them in various combinations of seminars and clubs and dorms and preferred rooms in Butler, it starts to feel like they’re a little more than “acquaintances.” But never more than a little.

In my hiking P.E. class, I’ve spent full Saturdays bonding with other hikers in the wilds of upstate New York and sharing granola bars with those acquaintances, having made some kind of genuine connection—only for us to come back to Manhattan, get off the bus, and go our separate ways. The senior nights I’ve managed to stay awake for are spent mostly in a closed-off little circle with what Dunbar would call my closest friends.

During my Connect Conversations, though, I’m still regularly astounded at how many of my residents—upon being asked how connected they feel to their floor—say something along the lines of “I want to meet more people, but I haven’t. And that’s OK.”

But is it? Do we need to be so complacent? Who you become friends with in college is ultimately so dependent on random variables—where you lived your first year, what COÖP group or UWriting class you were placed into—that letting so many people float around some status slightly closer than “acquaintance” seems like a missed opportunity.

For all you know, one of those people could become a good friend of yours. For all you know, you might have met one of your best friends a year ago but not know it yet. (That happened to me twice as a first-year.) Even if you and those acquaintances grow any closer, four years is too short a period for us not to normalize a basic level of friendliness toward people we’ve already met.

So, hiking friends, let’s go to senior night together. Real friends, let’s make time to hang out more regularly. If we were ever in a discussion section together, come say hi to me in Butler (I’m usually in 202!).

And to my acquaintance-slash-friend from Days on Campus: If you’re reading this, at the very least, give me a sign you still exist.

Teo Armus is a Columbia College senior majoring in urban studies. He is a former deputy news editor and senior staff writer for Spectator. Become his friend in real life or on Twitter @teoarmus. From Where I’m Standing runs alternate Thursdays.