The problematic past of Contemporary Civilization

The problematic past of Contemporary Civilization 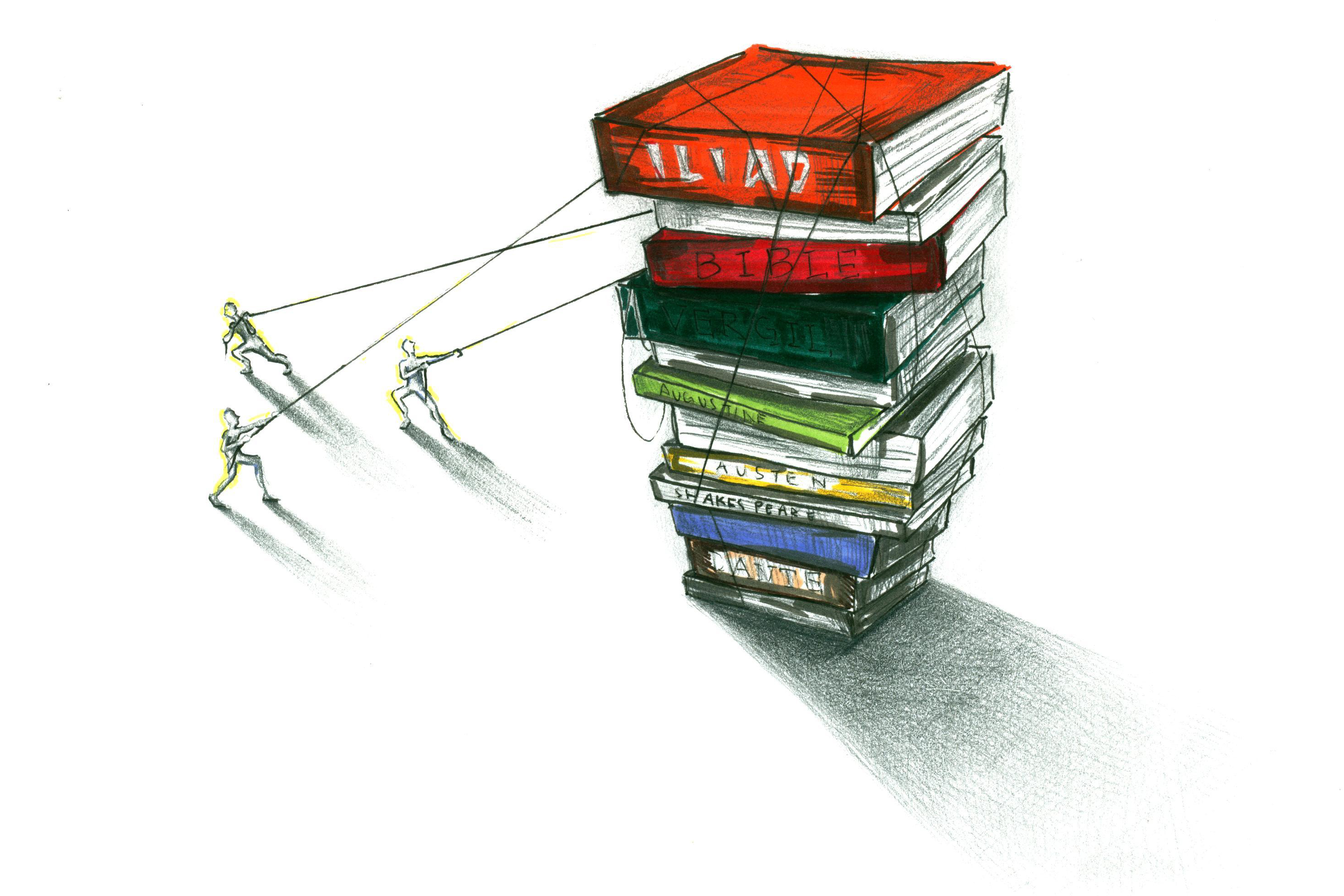 In 1906, President Nicholas Murray Butler—the namesake of Butler Library—declared in the Annual Report of the President: “Columbia University is a Christian Institution.” During the years following World War I, this declaration permeated the whole school, including the forebear of what we know today as Contemporary Civilization.

A centerpiece of the Core Curriculum, Contemporary Civilization—better known as CC—evolved from a course that Columbia offered to warbound officers during World War I. Soldiers taking the class were instructed that their military service would be crucial to the establishment of world peace. With this message, the course advanced Woodrow Wilson’s doctrines of intervention and anti-isolationism for the sake of capitalism and democracy, solidifying the belief that the West must decide the fate of other states and peoples.

This troubling origin of the Core—along with parts of this University’s history—is largely unknown and must return to the limelight for the current constituents of Columbia’s education. In order to address the problems of today’s curriculum, we must understand its complete foundation. CC must be analyzed along with Columbia’s history.

During the early years of the Core, many students and faculty—a majority of whom were wealthy, white Protestants—dreaded or opposed the influx of Jewish immigrants and refugees in the postwar era. With a curriculum that celebrated the successes of western hegemony, and with a University leadership that feared the “Hebrew Problem,” CC was founded upon the white Anglo-Saxon Protestant milieu of anti-Semitic, postwar America.

American anti-Semitism, however, does not paint the entire picture of the era in which CC emerged. Postwar xenophobia, coupled with heightened American racism during the Progressive Era, compounded the prevalent desire to preserve the white male majority, a national yearning that inevitably seeped through the early literature of CC. These texts included selected works by the original teaching staff, such as philosophy professor Irwin Edman’s Human Traits and Their Social Significance, which discussed, among other things, scientific racism.

The scope of the WASP influence at Columbia encompassed both the physical and intellectual landscapes. Outside the classroom, this desire for homogeneity manifested in despicable events like the Ku Klux Klan burning a seven-foot-tall wooden cross in front of Furnald Hall to protest a black law student in 1924. Within the classroom, CC and the broader Core began with a foundation of a particular whiteness, one that preserved the “purity” of WASP identity through literature.

It is undeniable that Columbia and CC have come a long way since their creation. The current curriculum no longer requires students to examine texts that promote scientific racism or asks students to elucidate the importance of Eli Whitney’s cotton gin in the context of American slavery. That being said, reverberations of the course’s distasteful ancestry still occupy the current curriculum. Contemporary Civilization and the broader Columbia Core still embrace Eurocentric canons and practices, keeping the same ugly form that was established when Columbia was, as University President Butler declared 111 years ago, a “Christian institution.”

In CC, for example, the Qu’ran, The Souls of Black Folk by W.E.B. Du Bois, and Virginia Woolf’s Three Guineas feel like tacked-on, last-minute additions, as if the three texts are somehow supposed to balance the other 32 books that celebrate dead, white men. The same is true of Literature Humanities: the three texts of Sappho, Jane Austen, and Virginia Woolf simply do not suffice. These texts feel tacked on precisely because they were added in recent years to fix a structure that was broken from the foundation. While these steps are better than nothing, there is more to be done. Plus, the Global Core requirement—just two courses—asks that students explore “the cultures of Africa, Asia, the Americas, and the Middle East in an historical context,” combining all the non-western studies under one category while devoting two years to the western canons of Lit Hum and CC.

Furthermore, in discussions of Aristotle’s Politics, Augustine’s City of God, or any text that mentions slavery, most classes do not focus on—or flat-out ignore—the American institution of slavery. While some students might feel the need to engage with the topic of slavery in the U.S., many students and instructors appear to avoid the issue or fail to mention the reverberations of the white male authors’ words in the history of this nation and University. Yet, CC—as described on the Columbia College website—vows to “introduce students to a range of issues concerning the kinds of communities … that human beings construct … to prepare students to become active and informed citizens.”

If the Core were actually designed to “prepare students to become active and informed citizens” regarding the kinds of communities that humans construct, it needs to reappraise the values of the current curriculum in order to reimagine the possibilities of a new, progressive arrangement.

The first step in doing so would be reckoning with the history of the Core and Columbia—both the good and bad. The University should edit the “History of the Core” section of the Core Curriculum website so that it portrays more than particularities in the evolution of classes. In addition to requiring that first years read The Iliad, the University should require all incoming students to read and discuss a summary of Columbia’s history, one that encompasses major events of the University—both proud and shameful.

Professors should collaborate to design a curriculum that matches the current era of history by pairing discussions of topics presented in course material with the exploration of real-life events, as well as the manifestations and ramifications of the topics.

If Columbia truly values diversity and inclusion, especially within such a turbulent political climate, Columbia will initiate the changes its students deserve. All members of an institution bear the responsibility of knowing the history, influence, and values of the community they inhabit. As members of the Columbia community, we must reevaluate the very element that defines the Columbia education.

Tommy Song is a sophomore in Columbia College majoring in history. He was born in South Korea and has been studying in America since fifth grade. All historical knowledge regarding Contemporary Civilization was provided by the research project of Dimitri Leggas, CC ’19, Song’s classmate in the spring 2017 Columbia Memory and Slavery seminar.