CUCR and the privilege of unaccountability

CUCR and the privilege of unaccountability 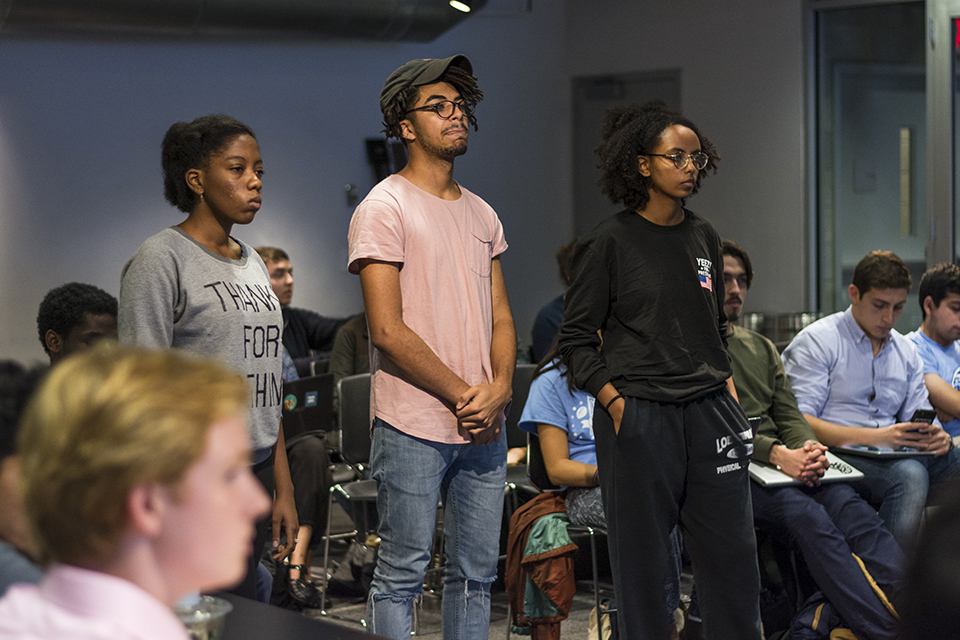 The discussion periods at Sunday’s Columbia College Student Council general body meeting allowed for significant insight on controversial issues on our campus. Many of those present, both CCSC members and students, shared their differing opinions and together came to a nearly unanimous decision to submit a report against CUCR to Student Conduct and Community Standards. Our decision came as a show of support to the Black Students’ Organization’s demand to the Student Governing Board to defund the Columbia University College Republicans for their misuse of funds and inciting of unproductive animosity on this campus. CCSC supported this demand because we support the continued push toward holding CUCR accountable.

As an elected CCSC representative, I have a duty to ensure that the voices and needs of my constituents are heard and attended to. Sunday, we came to the agreement that CUCR has brought presences to this campus that have not only incited real and physical violence in the past, but threaten the safety of our own peers.

As BSO president Braxton Gunter clarified during the meeting, the group’s proposal is about accountability. CUCR must be held accountable for their repeated and reckless use of their privilege against students who not only lack the same amount of privilege, but also do not deserve to be on the receiving end of hate under the flimsy façade of intellectual discourse. Indeed, there is no engaging with irrationality.

One particularly interesting argument presented by CUCR last evening was that the presence of these hateful forces was justified by their status as “politically relevant” within the realms of U.S. and British politics. They argued that since Tommy Robinson—a hateful figure who has, in the past, incited violence against already marginalized groups in England—has a few thousand followers on Twitter and can project his vitriol over the voices of non-radical conservatives, he has the right to speak to our students and make unsafe the spaces within which members of those targeted communities exist.

I am a member of the Muslim Students’ Association, a student group which still remains without a campus life advisor despite the emotionally draining and politically unstable climate which affects these students’ experiences in particularly painful ways. I am also an executive board member of Turath, the Arab Students’ Association, another similarly affected group. Coming from these communities, I question how in the world a person’s simple and often empty “political relevance” can earn them a platform at one of the most prestigious and diverse universities in the world.

I ask the readership of this article, along with supporters of CUCR, to envision an alternate universe wherein the board of Turath or the constituency of MSA would have the gall to bring—or even suggest bringing—an equally “politically relevant” person of analogous views to this campus. What if such groups invited someone who perpetuated similarly hateful and divisive discourse to this campus to speak? To envision bringing to campus a man called Mohammed or Ahmed or Hussain or a woman named Khadija or Fatima or Maryam to speak, who has openly or implicitly advocated for violence against any group, especially regionally marginalized groups like Christians, is to envision the impossible.

Marginalized groups on this campus which have been targeted, repeatedly hurt, and disregarded by the invitations of these speakers would simply never be able to perpetuate hateful discourse without expecting others to hold them personally accountable. Marginalized students are, in fact, unfairly held accountable for much less. It is a fact that Muslims or Arabs face repercussions when someone across the globe commits an act contradictory to the doctrine of Islam or customs whose title they usurp. This same phenomenon indubitably exists within other minority groups. To passively exist as a member of a marginalized community is enough to convince some that one is culpable for any violence committed in the name of that group.

While minority students are held unjustifiably responsible for the actions of others, how can CUCR actively do harm and expect to remain innocent? How can a group of people on this campus take an active role in inviting ideologically and physically violent speakers and expect to bear no culpability?

The members of CUCR at the meeting said they wanted to expose the Columbia community to beliefs of an alternative nature. They claimed they want to simply allow us insight into how our “enemy” functions. What they do not seem to understand, however, is that there is no escaping this injustice and irrationality in the first place. It’s not like the targeted groups were unaware that they were targeted or that there were people out there who questioned their rights or status as equals. The members of my various communities or of any marginalized group do not need CUCR to enlighten them with the knowledge that there is negativity in the world. Indeed, we experience it each day. Their justification is not only misguided and self-righteous, but deeply condescending.

One’s ability to gain followers on Twitter or share their incoherent and illogical talk is not the same thing as being a legitimate political actor whose words are worthy of the stage offered to them. One cannot engage in fruitful dialogue with those who deny a group or person’s essential rights. I believe that someone else’s right to voice their opinions, violent or otherwise, should not supersede my right to feel like a human—worthy of respect and a feeling of safety on this campus. No matter how logical my arguments seem or how human my emotions are, there are those who will never cease to deny my equality.

Toqa Badran is a junior in Columbia College studying political science with a double concentration in anthropology and Middle Eastern, South Asian, and African studies. She is the student services representative for CCSC.