Columbia vs. the Trump Tax Plan

Columbia vs. the Trump Tax Plan 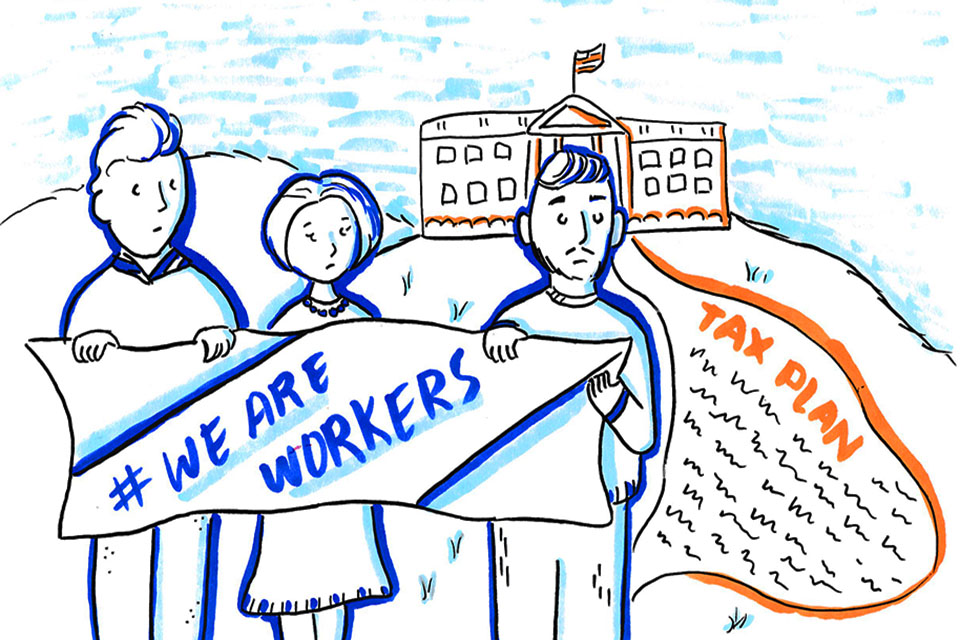 Columbia’s administration and the University’s graduate students have not always been on the same side when it comes to certain issues. Recently, however, there has been a development that should unite everyone in the Columbia community: opposition to the radical tax plan being pushed by President Donald Trump and Republicans in Congress.

You might be wondering why a tax proposal could have an immediate and direct impact on our campus. On the surface, tax rates, while certainly relevant to everyone’s day-to-day lives, feel disconnected from student affairs. Why should Columbia personnel take a stand, and why should students have to call their senators again when we have finals to study for?

We should do so to show that we care about our faculty, staff, graduate students, and anyone at Columbia with a student loan.

The GOP tax plan attempts to tax tuition waivers as income, showcasing just how harmful the legislation is. Tuition waivers, along with research and teaching payments, allow graduate workers to pursue degrees that would otherwise be financially unviable for anyone who isn’t in a position to spend hundreds of thousands of dollars on several years of postgraduate education. Treating tuition waivers like salaries could triple or even quadruple graduate students’ tax bills, such as in the example of Amanda Coston at Carnegie Mellon. Making higher education even more unaffordable is an impressive feat, but Republicans have found a way to do exactly that.

As a March for Science statement in opposition to the GOP tax bill notes, it’s already hard enough to be a graduate worker. The coalition’s statement mentions that the legislation would raise taxes on people making less than $20,000 per year despite the fact that tuition waivers do not lead to more money in their pockets. As the statement argues, this confiscatory measure is especially relevant to the scientific community because of the 145,000 students hit by skyrocketing taxes, about 70 percent are in STEM fields. People might not love Frontiers of Science, but that doesn’t mean FroSci professors should go broke because of Paul Ryan’s agenda.

At a time when more attention is being paid toward the need for greater diversity in academia (as it should), a plan that makes it hard for everyone except young, wealthy, and childless Americans to pursue Ph.D.s is all the more inexcusable. The GOP tax plan exists in direct opposition to efforts like Columbia’s $185 million commitment to faculty diversity. Even when they are admitted to top Ph.D. programs, many first-generation students and students from groups that have long faced systemic discrimination could be shut out from the professoriat if the tax bill passes.

The GOP tax plan would not just affect graduate students. It would also devastate nonacademic staff who are working toward a better future for themselves and their families. Programs that allow university employees to receive reimbursements for educational expenses are on the chopping block. Remember the inspiring Humans of New York post about Gac Filipaj, the Columbia janitor who earned a degree after over a decade of taking courses in his spare time? Stories like Filipaj’s would be nearly impossible at Columbia if staff receive no benefit for studying at their place of employment. Congressional Republicans must have given up on the concept of “pulling yourself up by your bootstraps.”

A surprising alliance is coming together to fight this regressive tax plan that favors billionaires and corporations over middle-class families and graduate students. Columbia is a member of groups like the Association of American Universities, an organization that has urged Congress not to pass the bill. Administration officials should do everything in their power to amplify universities’ collective message against the tax plan. As for students and workers, the Graduate Workers of Columbia University has engaged in critical activismagainst the bill and is joining nationwide organizers at the November 29 Rally Against Grad Tax Hikes.

These actions are not Columbia needlessly bringing politics into the university sphere. Rather, these are necessary steps against the political sphere decimating universities. The goal driving senseless cutbacks to higher education makes the tax plan all the more despicable: tax breaksfor ultra-wealthy Americans. Even if you believe in supply-side economics, it is tough to justify disinvesting from the most educated and skilled people in our workforce just so that someone like Steve Mnuchin can have more money to use for weird photo ops.

Everyone in the Columbia community should continue pushing back against the dangerous GOP tax bill. I know this may sound, well, less than fun; taxation is not the most exciting issue for most people, and students and staff are ready to have a restful holiday season, not another political battle. With that being said, the stakes are too high for us to ignore what’s going on in Congress. Don’t let the reactionaries in D.C. rip off the scholars in Morningside Heights and across the nation.

Ben LaZebnik is a Columbia College senior majoring in urban studies. He wants to thank the Spectator team and everyone else who made his first semester as a columnist a fantastic experience. The Unwelcome Guest runs alternate Wednesdays.