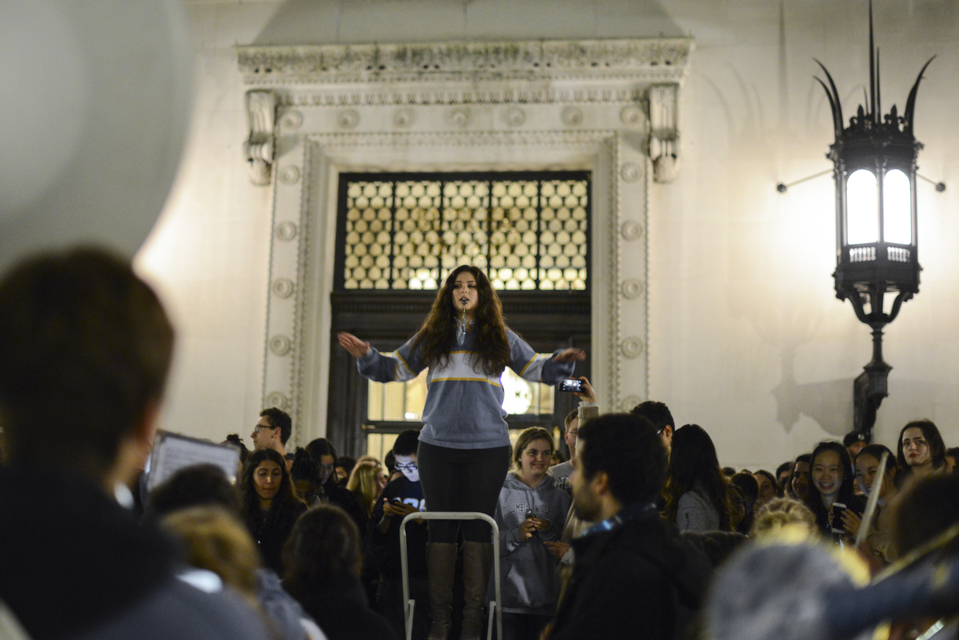 A long, long time ago in the land called Morningside, there was no Orgo Night. Oh, there was a Columbia University Marching Band all right, but in my CUMB days, the group’s once-a-semester midnight invasion of Butler Library hadn’t yet been invented. That didn’t happen until 1975.

For two years in the 1960s, I wrote CUMB’s football shows. Even then, we called ourselves “The Cleverest Band in the World.” One time on the old Baker Field, we announced that we were forming “the upper part of a topless bathing suit.” We left a sousaphone on each 45-yard line, ran off-field and played “My Favorite Things.” That was just one gag in that day’s show.

We had gone too far. The University president was barraged with complaint letters (and, to our perverse pride, an angry telegram from conductor Leonard Bernstein). The president bucked them to the dean of the College, who summoned our managing board to his office, waved the letters in our faces, and told us never to embarrass the school like that again.

Three years and two Columbia degrees later, all must have been forgiven, because the same dean hired me to be public relations director for the College; two years after that, I moved to the University’s public relations operation. So having lived on both sides of the student-administration divide, I have a special vantage point from which to look at campus affairs. And in evicting Orgo Night from Butler last winter, I think the administration really blew it.

Actually, 2016 wasn’t the first time authorities came down hard on the hugely popular student tradition. In 2001, an overly rambunctious overflow crowd led to Butler being summarily declared off-limits. Alumni stepped in, and administrators and students negotiated a settlement. Orgo Night was back in Butler.

That fuss was about property damage and fire codes; objections since then have been about words. Orgo Night is no edgier, but in today’s culture some students believe in shouting down others for saying the wrong thing. A few have called for the University to prohibit the show altogether. In 2015, a New York Times piece on the controversy brought the kind of exposure that prompts big donors to phone their campus contact and ask, “What the hell is going on up there?”

Last December, without warning, the administration caved and pulled the plug. Apparently, the people in charge understood the optics—President Lee Bollinger bills himself as a champion of free expression, after all—so they concocted a cover story to explain the surrender: After four decades, the president, Dean James Valentini, and other administrators had discovered that “library rules” prohibit telling jokes and singing “Roar, Lion, Roar” in Butler 209. “[T]here have been a number of objections and complaints by students of disrupting study time,” Bollinger told the University Senate.

Oh, please. Library rules? Disrupting study time? Of hundreds of comments I surveyed in campus media and on Twitter, a great majority supported the tradition; a small but persistent group objected to jokes they found upsetting. Students who don’t like Orgo Night want their space to be safe, not quiet, but that’s the administration’s story, and they’re sticking to it.

Under pushback from CUMB, the administration proposed isolating Orgo Night in Lerner Hall. Lerner? Sure. Also, this year’s Commencement will be in the Fairway parking lot. The point of Orgo Night is to offer relief from study stress; that’s why Orgo Night’s initiators chose a library reading room.

The undergraduate student councils, Spectator’s editorial board, and numerous students and alumni have weighed in to defend their tradition; they’ve been given only a make-believe explanation that fools few. Far too many will remember this battle in the War on Fun, and it’ll be Columbia’s loss.

Undergraduate Admissions, NSOP, the Center for Student Advising, and others have long promoted Orgo Night as a uniquely Columbian community-building event. In fact, last month, seemingly unaware that their bosses had booted CUMB from Butler, the Columbia College Fund emailed alumni and parents a pitch prominently touting Orgo Night as one of Columbia’s “beloved traditions.” Oops.

Sadly, the reaction has already begun, with alumni pointing out the disconnect and holding back on donations on Columbia Giving Day. In the online Alumni Community, one snapped: “White supremacists are OK, but off-color jokes in the library should be prohibited?”

I no longer do PR for Columbia. If I did, when the issue came up last year, I’d have said: “Boy, wouldn’t we love to cancel Orgo Night for good? But we’re Columbia University. We can’t.” I’d have recommended an honest discussion with students and alumni.

Today, approaching the one-year anniversary of the edict and anticipating another performance by brave musician-jokers in the wintry outdoors, I’d draft a statement saying:

“At a great university, everyone can learn, even deans, provosts, and presidents. We’ve listened and we’ve learned how important Orgo Night is to many students and how memorable to many alumni. A break during last-minute cramming can be valuable, especially in a library. (The location is the point; we get it.) Those who dislike the show’s mockery can stay away, protest outside, or go inside peacefully and boo. But twice a year, we’ll go back to suspending a rule for 45 minutes. Students can blow off steam and then everyone can continue studying. So come on in from the cold. And good luck in those exams.”

A statement like that would show that administrators can be flexible. It would heal a self-inflicted wound and help avoid producing alumni who don’t give a damn and won’t give a dime. But more than that, it would be the right thing to do.