The ugly history behind the administration’s anti-union campaign

The ugly history behind the administration’s anti-union campaign 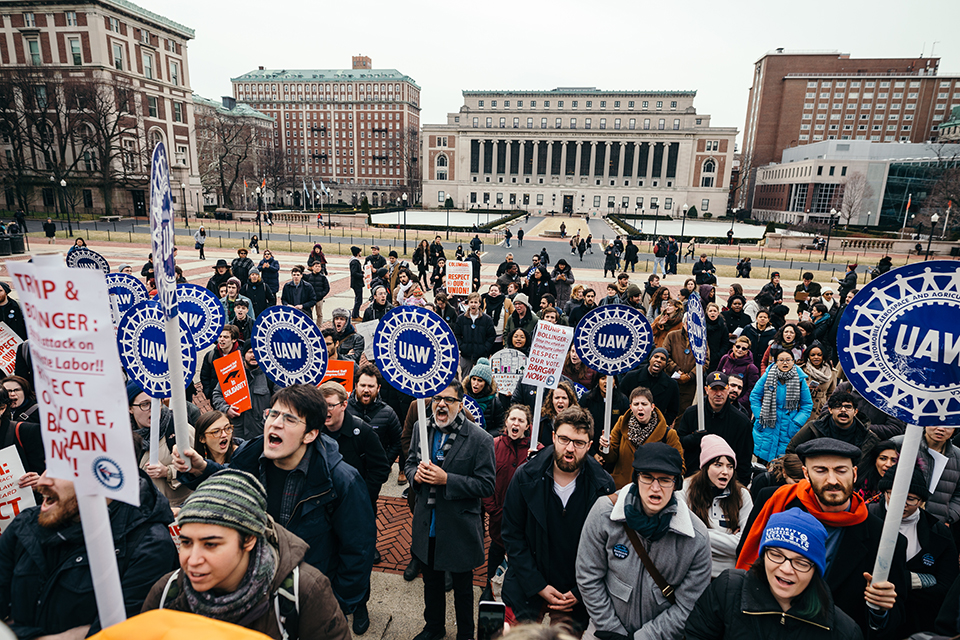 Last Tuesday, Provost John H. Coatsworth announced via email that the administration plans to break federal law by refusing to bargain with the graduate student union. As a Columbia graduate student, I read his email very carefully.

I didn’t see any acknowledgement that graduate students chose to unionize by a 72 percent majority—overwhelming by any standards—in a vote that was certified as fair by the National Labor Relations Board.

What I did see was a denunciation of the prospect of “an outside party” getting involved in university life. In Provost Coatsworth’s telling, there was no successful unionization campaign led by, organized by, and supported by graduate students. There was only “the effort by the United Auto Workers to unionize” Columbia students.

Provost Coatsworth is a trained historian, so I am surprised that he seems to have missed the truly ugly historical resonance of this argument. But there is no mistaking it; discrediting a social movement by painting it as the work of nefarious “outsiders” is one of the oldest moves in the playbook of the powerful. His email offers no new arguments for denying our democratic choice. But it does offer a window into the thinking of an administration that wants to deny that we are even capable of legitimately making such a choice.

The idea of the “outside agitator” has a long history. It was, for instance, a favorite slur directed at civil rights workers in the segregationist South. One volunteer, Peter de Lissovoy, remembers how the smear punctuated his work with the Student Nonviolent Coordinating Committee in 1960s Georgia: The local authorities “were always growling out that one … never just ‘agitator’ either, always ‘outside agitator.’” Nor is this some sort of long-forgotten historical relic; the 2014 protests in Ferguson, Missouri, were pinned on “outside agitators.” In December, Alabama Senator Doug Jones got in a bit of media trouble for joking about “outside agitators” during his election campaign.

It’s a fraught concept. In explaining why, I want to be clear that we need not draw any crude comparisons: Many groups have been the targets of the kind of argument that Provost Coatsworth used, and of those, Columbia graduate students are by far among the most privileged. With that said, we still have an obligation to learn from history. And what we learn from the history behind Provost Coatsworth’s words is the story that powerful men often use to discredit dissent.

The story looks like this: There is a community—an integral, organic, unified community, bound around a common purpose. It has leaders and followers, bosses and employees, the more and the less fortunate. But it is the sort of place where the lessers look up to their betters, where they acknowledge the right of their superiors to power and perks, and where—when they have a complaint from time to time—they always go through the proper channels. One day, though, some people refuse to take their complaints through the proper channels. They believe that the community is unfair in a more fundamental way, and they act on that belief.

And when they do, how natural, how comforting it is for the people in power to say: But our community was working—you were happy! How could you have gotten such ugly ideas into your head? They must have come from outside!

“Outside agitator” talk, in other words, is a way of denying that a certain community can spontaneously generate its own dissent. It is a way of painting dissent itself as sinister and alien. And it comes naturally to those for whom the community is working well—the enfranchised, the well-connected, and the well-compensated.

The “outside agitators” story imagines a community unified around a common interest, until a third party sneaks in to spoil things, like a snake in the garden. Yet the successful unionization campaign itself showed that that story was untrue; regardless of what administrators believe, the reasons we had for forming this union were our own. For example, during that campaign we argued that graduate students’ interest in a workplace free of sexual harassment could easily come into conflict with the University’s interest in protecting powerful employees.

But Coatsworth’s comments show that what began as a campaign over wages, benefits, and workplace fairness has also become a struggle for recognition and respect. For him, and for the Columbia administration, unionization was something done to us, not something done by us. The disrespect for our agency—for our capacity to think, act, and choose for ourselves—is palpable.

A crucial part of that agency is our ability to determine for ourselves what counts as “inside” and what counts as “outside.” As Peter de Lissovoy put it, “Personally I never felt outside anything. I felt inside everything that mattered.” In the same way, we deny that Columbia is “inside” and our union is “outside.” We are part of this University—but we are also part of the labor movement in this country. Our vote stands for the conviction that, as a matter of economic fact, we have more in common with the other unionized workers on this campus than we do with administrators making six- and seven-figure salaries.

The author is a Ph.D. candidate in the department of political science.