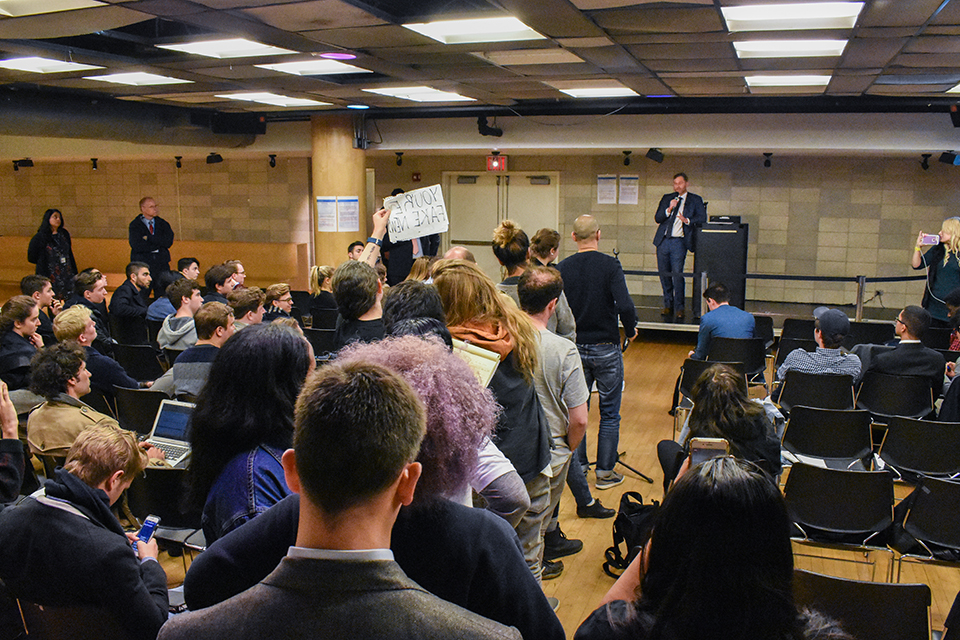 Mike Cernovich addresses questions from protesters at an event hosted by CUCR in October.

Tomorrow, we’re expecting an on-campus debate between Ann Coulter and Mickey Kaus regarding the state of Trump’s America. The event, hosted by Columbia University College Republicans, brings together two Trump supporters to debate his policies. It has already elicited aggressive reactions from Spectator’s readers, one of whom commented, “Protest like hell.” This recalls the image of the series of talks by white supremacist speakers hosted by CUCR last semester—an initiative most of the students here at Columbia opposed. The first speaker, Tommy Robinson, had his speech interrupted by protesters who were inside the auditorium. The protestors were understandably angered by Robinson’s hatred, racism, and bigotry, and were driven by a desire to promote a safer campus for minority students, including people of color and Muslims like myself.

However, despite good intentions, the protesters failed to perceive that by suppressing violent speech, they were doing more harm than good. I believe that, in general, radical communities espousing harmful views emerge and thrive when faced with hatred and repudiation from the public.

In the long term, listening to and engaging with these ideas may ultimately allow for their abolishment in the future. These groups thrive on the condition of being ostracized, and trivializing them only validates the ideas they feed on; by categorically rejecting their positions without engaging in discourse, we validate their feeling of dejection causing them to hold onto their positions more tightly. If we provide them with a democratic arena in which they can stand up and defend their arguments, they may find that their arguments unravel under scrutiny and their followers might notice inconsistencies in speeches full of gibberish and meaningless propaganda. By allowing these speakers on our campus and questioning their ideologies, marginalized and affected communities will eventually realize that doing so actually aids their own cause more. As in the case of extremism, simply dispelling the radical ideas while ignoring their unfortunate prominence only further isolates their proponents. This gives white supremacist groups the opportunity to grow and sharpen their ideas within a purely sympathetic group, ultimately strengthening of their dehumanizing and delegitimizing points of view.

This critical issue continues to destabilize our campus. In my opinion, the benefits of allowing these people to speak outweigh the downfalls; as people of color, we will have the opportunity to confront these ideas, but if we do not give them room to speak, they will hold firmer than ever to their discriminative ideologies without questioning them.

Simultaneously, casting the speech away without consideration or argument would make those in agreement more adherent to their principles and allow them to regard themselves as the “good few,” who must take actions in order to repair what they may view as as corrupt society, adding fuel to the fire. Moreover, what will society reap from casting away extremely conservative voices, other than strengthening their feelings of isolation? Most recently, we reaped the fruit of such alienation in the election of a not-so-progressive president of the United States.

At the heart of the issue lies the obstinacy of both sides, each completely unwilling to hear the other out. Students deal with white supremacist views as abstract ideas that, through pressure, can be eradicated; they overlook the fact that the ideology is rooted in the minds of a public base. The case for eradication of the white supremacist ideology appears as a case for eradication of people holding such radical views (who definitely exist within society, and maybe even within our own classrooms).

Instead of doing good, the students’ protests drive the white supremacists towards a defensive position, potentially justifying their bigotry, discrimination, closed minds, and unwavering conservative stances as “self-defense.” If we, as educated and intellectual students of Columbia participating in ideological dissent with equals, truly want to achieve a post-hatred society, we should be willing to, at least, humanize our opponents and allow them an arena to speak. After this we can, through speaking rather than yelling, underscore the fragility of their arguments. So, if Coulter’s speech upsets you tomorrow, I would recommend thoroughly listening to what she says, trying to engage with the points she raises, and emerging victorious with a more solid and well-informed position.

The author is a first-year from Egypt. He is planning to study physics in Columbia College.