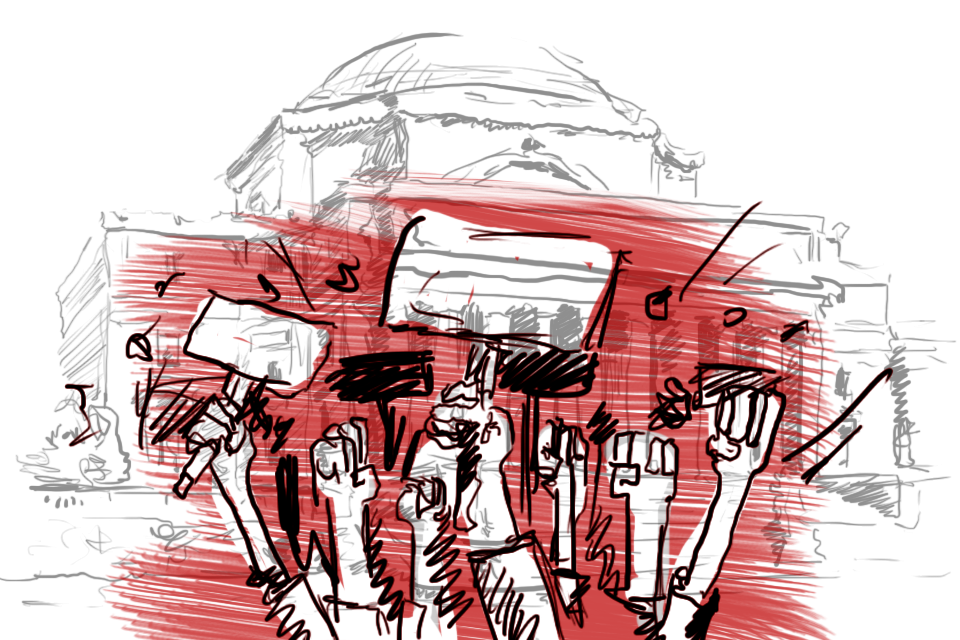 Omaha was not teeming with individuals wanting to go to Columbia. Those that did were Jewish and driven to succeed. I was merely Jewish. My mother was enamored by the idea of the “Ivy League.’’ Like the clothes she wore and the furniture we sat on, only the best would do. I relied completely on her judgment in picking schools. We assembled a list of distinguished eastern schools; I filled out the forms and took the tests. Columbia was the best––most famous?––school to accept me. Like many Columbians of my day, I didn’t get into Yale.

I had no idea. I’d never been to New York. For people who gave a shit, Columbia was a beacon of student activism and on the cutting edge of social upheaval. I didn’t. I was going into the family business, at school to avoid the draft and do the socially correct––for Omaha––four years of college. While I shared my peers’ disdain for the Vietnam War and the Nixon administration, I never felt personally threatened or called to action. The protests that erupted in 1968 were rife with students like me.

John Jay Hall was a robust old prison in 1968. The University, having decided that the previous year’s riots were partially caused by obscene overcrowding, decided that a reasonable solution was to reduce student density by half, making every room a single. A general relaxation of the school’s Victorian rules of conduct was introduced. This last move was an absurd failure, as student culture swept past University-defined “standards” into a very exciting abyss of drug- and liquor-induced incivility.

I had––and still have––no politics. Once I stumbled my way into the Columbia social mainstream—sex, drugs, and rock and roll—I really didn’t care about the “cause,” although it was clear that the cause was, broadly speaking, social justice. Among the groups embraced by the cause were the poor—particularly our community neighbors—draft-aged men, and really anyone who was not a middle-aged white male. Who attempted to lead the Columbia administration during the riots? Middle-aged white males, the very person I am today.

The University was completely unprepared for student unrest. Students contemplating any action outside of studying confounded everyone. Like the rigid hierarchical organizations we studied in Contemporary Civilization, they moved from sweet reason to force in about 30 seconds. By presenting students with a brick wall defense they sent us looking for battering rams. Andrew Cordier succeeded Grayson Kirk to become president of the University and shrewdly manipulated the administration and revolutionaries into a mutually hostile co-existence. He was the only member of the administration I admired.

Student unrest at the college was led by a small group of committed idealists. These leaders had a core of followers who were not overt ideologues but could be relied upon to show up and add weight to a demonstration. There was also an enormous pool of sunny-day revolutionaries who came out when they felt like it or when particularly enraged. Few individuals were upset when finals and midterms were canceled due to one insurrection or another.

Personal relationships were not dependent on campus issues. Friends were largely determined by random placement in dorms, classrooms, and clubs. There was a cleaner division between dedicated wastrels and committed students than any other campus fracture. Ultimately, students made a simple distinction between individuals who were jerks and those who were okay.

What did I learn at Columbia during the days of rage? Organizations, whether defending the status quo or seeking to destroy it, are all riddled with the same self-serving arrogance and elitism. The leaders of either side may demonstrate the purity of thought necessary to hold onto their convictions, but the majority are just going along for the ride.

The author went to Columbia, graduated as a member of the class of 1973, and went home.

This op-ed is part of a Scope on the 1968 protests at Columbia. To respond to this op-ed, or to submit an op-ed, contact opinion@columbiaspectator.com.