No more tears in the bathroom

No more tears in the bathroom 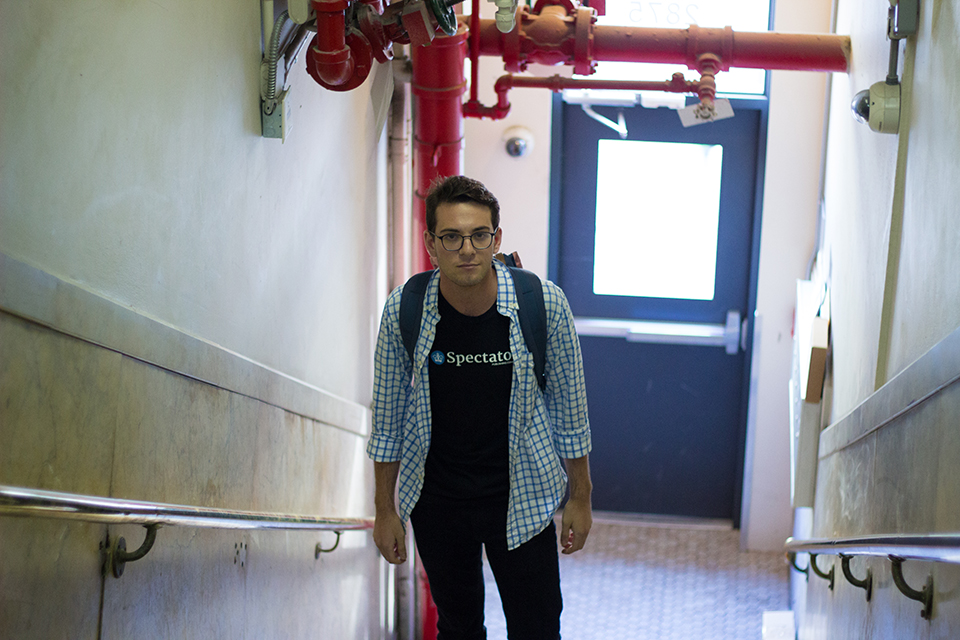 At Spec, I was once told—only half-jokingly—that you could only use the elevator once you’ve cried in the bathroom.

This was back in the olden days, when the office was a three-story climb up from the door beside Pinkberry, rather than a 10-block trek over to some rooms in Riverside Church. In that era, the line goes, it felt as if crying might as well have been some hazing ritual to familiarize first-years with the stress of working for a daily college newspaper.

All it took was some sobbing in a dimly lit stall, maybe an awkward encounter on your way out, and boom—you were a veteran reporter, skipping a three-story climb to the office for an effortless ride up instead (mechanical issues and human feces notwithstanding).

Before coming to Columbia, I wanted Spectator more than anything else in the world. I spent the months before arriving on campus diving into the website archives, reading old senior columns and big front-page scoops. I wondered about the friends I would make and the crazy reporting adventures of my own I’d be able to tell four years later.

In many ways, I got exactly what I had wanted. I made the front page, became a deputy, covered national news. I spent 80 hours straight trapped in Low Library, sleeping on the stone floor and not showering. Talking to people about issues like race, divestment, and sexual assault—even just daily life on campus—I got lucky enough to engage with Columbia at its best (and often, most controversial).

Sometimes, though, Spectator also made me want to break down and start stress-sobbing in public. And a few times, I did: at a table outside Brad’s (now Up Coffee), on the steps outside Woodbridge, and, yes, in the Spec bathroom.

There could only be so many C’s on Literature Humanities essays, or campus-wide events spent friendless and alone, or times I was told, “This is a business, not just some club,” before I started to question whether it was all really worth it.

I finally verbalized this feeling on a sunny Sunday in April of my first year, after I had spent most nights that week passing out on a giant blue bean bag in the office. I didn’t feel happy at Columbia, I confessed to my editor, thinking maybe she would understand. A few minutes after I began crying, she got up, told me Spec required sacrifices, and left.

That’s the bittersweet truth about this newspaper: As much as it was the cause of my first-year unhappiness, it was also the antidote for it. Spec consistently made me feel like I would never be enough. In my first year, it was also the one place on campus where I felt like I truly belonged.

It was, in short, a lot like the rest of college: contradictory and inconsistent and incomplete. I did a lot of growing up.

For all the stress and solitude, there were many wonderful friends who were always ready to laugh, offer advice, and take impromptu trips with me to Westside in the middle of the night. For all the tears I shed inside the Spec bathroom, that was also where I (drunkenly) kissed a boy for the first time, still figuring out how to be fully out of the closet.

The old office is even next door to my elementary school. How’s that for a coming-of-age metaphor?

The thing is, Spec is worth it. I love this newspaper, and I don’t regret pouring so much myself into it. But I’ve also realized that during my time here, something was missing.

Over the years, I’ve seen too many people suffer silently through the side of the organization that doesn’t get mentioned in senior columns: the favoritism, the lack of proper credit, the mentality that you matter at Spec only insofar as you’re useful to the daily publication of a newspaper. Not because you’re a human being.

Every year during turkeyshoots, for example, it felt to me like there were at least a few cases where races were artificially created between the only likely candidate for an editor job and someone else who didn’t actually want that position. As an opinion columnist, I was repeatedly reminded that I was an “independent contractor” and not actually on staff.

Admittedly, it’s been a while since I was in the thick of it. I know for a fact that there are plenty of good, kind people—ones who would never walk away from a crying first-year—who are working their asses off every day to change the institution from the inside.

I don’t envy the staffers undertaking this task one bit. Spec is a newspaper, after all, and it can’t just be making people feel good. Chaos is arguably part of life there. Inevitably, some staffers will get overwhelmed and quit. Tears might even be shed.

But I still wonder if the office can become a place that’s a little kinder, or at least a little more supportive. Where a lost kid looking for somewhere to hang out is welcomed into a community, not filtered through countless interviews and training sessions. Where people believe in each other, rather than tearing each other down. Where an upset reporter—someone not unlike me, three and a half years ago—doesn’t need to start crying in the bathroom as a prerequisite for using an elevator.

For the record, though, I never stopped taking the stairs anyway.

Alanna and Elizabeth, thank you for being editors who cared about me as a human and always making time for lunch at 30 Rock. Deb, for being a shoulder to cry on, both literally and figuratively. Paulina, for the Pretty People Club.

Annie and Aaron and Giulia and Micayla, for all the laughs and rants and coffees and incomprehensible Glurb lectures. Clara and Catie, for meatballs and mislabeled cookies and sticking out the year as news deps.

Cauveri and Aubri, for dealing with my ridiculous Twitter guides and for sticking it out long after I left. Rébecca, for hanging out with me at CDSAAD and Birch and letting me write an Eye lead from very far away.

Jenna, thank you for being the best goddamn friend I made inside that office. My first three years at Columbia would not have been as happy and fulfilling as they were without you.

To my friends still battling it out in the office night after night—Juju, Kevin, Maya, Octavio, Stacy—thank you for making this washed-up senior feel like he still had a place at Spec. Keep at it, challenge the paper to be better, and step back from the daily chaos if you need to. And more importantly, please don’t forget to believe in yourselves, your staffers, and each other.

Teo Armus is a Columbia College senior majoring in urban studies. He was a news staff writer for the 138th and 140th volumes, a deputy news editor for the 139th volume, and an opinion columnist and a writer for The Eye for the 141st volume.