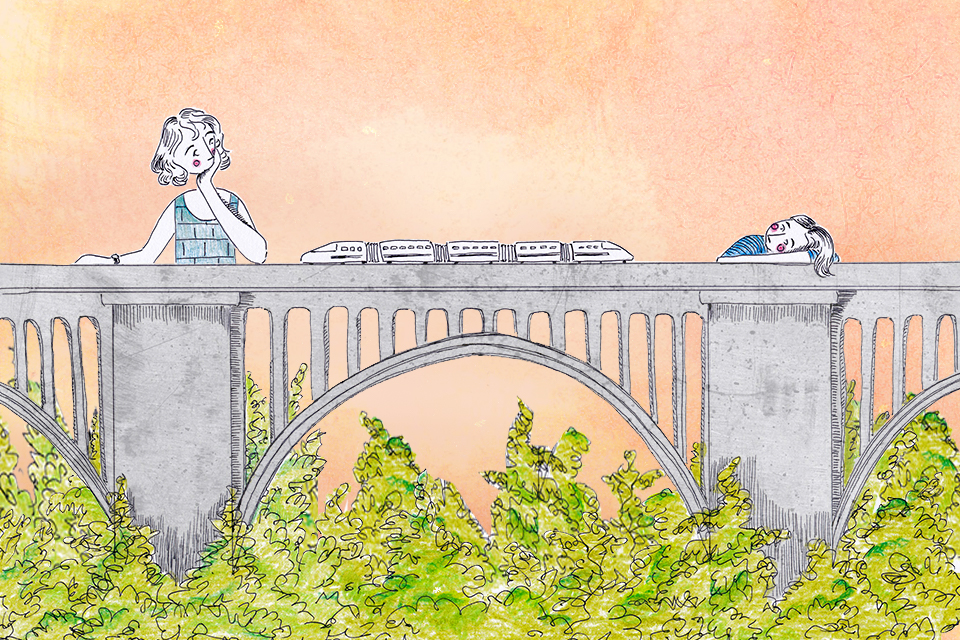 My first weeks at Barnard were terrible. I was rejected from multiple clubs (and wrote a Spec article about it), I missed home, my family, my friends—and I missed my girlfriend. But there was a silver lining—although we went to different colleges, I had someone to share those first-year experiences with, who was going through the exact same changes and uncertainty. Rather than growing apart because of our distance, we grew together.

My girlfriend and I are now both in our sophomore years—I’m at Barnard and she’s at Vassar. We’re told that high school relationships aren’t meant to last. It was instilled in me by my parents that I shouldn’t go into college with a high school boyfriend holding me back. I went into college with a high school girlfriend (oops). We’re now going on our second year of long-distance, and I think it kind of shocks people when I tell them that. When we started college we’d only been dating for a few months, and many people told us we shouldn’t stay together.

“You’ll be too attached and won’t meet new people.”

“College is a time to explore your sexuality, not be tied down!”

“Long-distance is too hard, and you’re probably gonna break up anyway.”

I was also warned about the “turkey dump,” a term coined for when first-years in long-distance relationships call it quits at Thanksgiving. My parents expected us to break up before we left for our respective schools, and I kind of expected us to as well. We wasted a lot of time that summer crying and deciding what we should do, until we realized the backwardness of it all. If we were in love and things were going so well, why would we end it just because we were going to college?

We’re in a somewhat unique position where our “long-distance” relationship is really more of a medium-distance one. Vassar is just a short hour-and-40-minute train ride away from the Harlem 125th station, which is very different from people who are in cross country or even cross-world long distance relationships. But that doesn’t mean it isn’t difficult.

The first couple of times we visited each other I cried when it was time to say goodbye. I thought it was going to get easier, but it’s never easy leaving the person you love. I just visited her last weekend, and while I didn’t cry this time, there was still a pang in my heart on the train ride back. Physical intimacy (not just sex) is a major part of many romantic relationships and it’s really tough not being able to fulfill that aspect of our relationship while we’re apart. We can FaceTime for hours on end but it’s not nearly the same or as good as a cuddle or a hug or a kiss.

While I often lament how hard long-distance is, I do see some value in it. I think being apart has helped us both foster some independence from one another. It’s important to have a life outside of your significant other, which can be very hard to do if you go to the same school. I know people in relationships at both Columbia and Vassar who spend every night at each others’ dorm and virtually no time apart. And I know I would be tempted to do the same if my girlfriend and I went to the same school. Distance has also forced us to be great communicators. FaceTiming aside, we often don’t have the benefit of facial or physical clues to indicate what the other person is feeling—all we have is language. Learning how to use language effectively to communicate our wants and needs is possibly the most valuable lesson I’ve learned from long-distance.

We also get to share our completely different college experiences with each other. I love going to college in New York because there’s always something to do. When you leave campus there is a whole world at your fingertips of restaurants, museums, bars, theater, and so much more. Conversely, it’s nice to have a quiet natural getaway in Vassar, for when the hustle and bustle of the city gets to be too much. And for my girlfriend, coming to visit me in the city can be an escape from a sometimes claustrophobic campus at Vassar. But it’s still hard for us both to find time to leave our friends and obligations at school (we both have major FOMO).

I’m still asked by relatives and friends alike, “Do you think you’re gonna stay together all four years?” I’m not psychic and I can’t predict where either of us will be three years from now. All know is that we’re happy with the way things are right now. She’s coming in two weeks and I can’t wait.

Kayla Streiber is a sophomore at Barnard College still trying to find the best tacos in Manhattan. Feel free to send her suggestions.

To respond to this Love, Actualized, or to submit an op-ed, contact opinion@columbiaspectator.com.