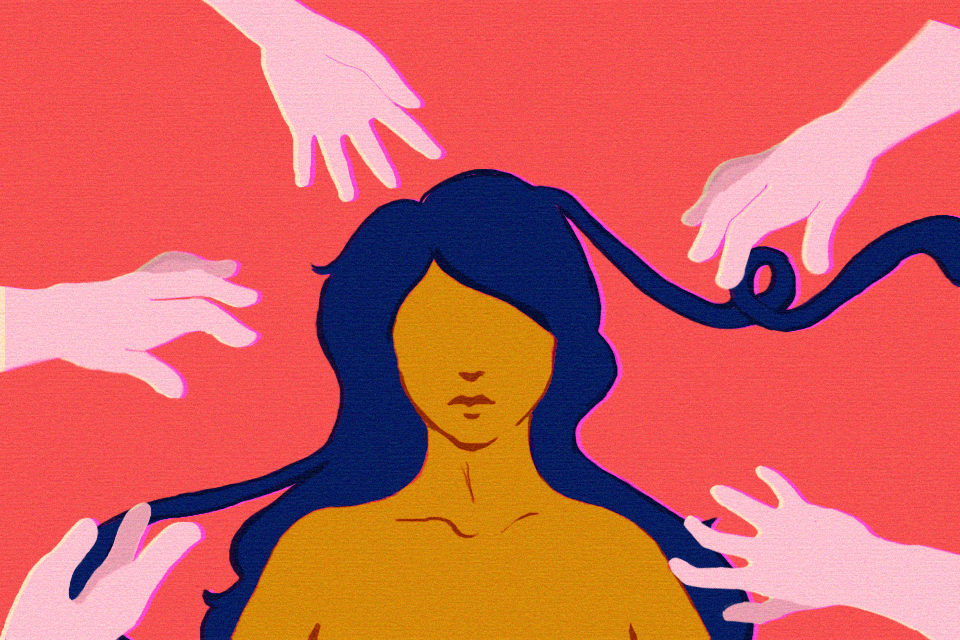 Last semester, I was mid-hookup with a person who somehow decided it’d be an amazing idea to call me an “Aztec queen” as I wrapped my arms around them. Before you ask me, yes, they were white.

I’m Latinx, stand at 4 foot, 11 inches, my hips measure 40 inches, and I also happen to speak with a slight accent. These attributes are nothing more than inconsequential parts of my persona, yet they are always primary topics of conversation when people attempt to flirt with me on this campus. This fetishization, the excessive fixation on a specific person or thing, who, in this case are “different” from yourself, has been a regular part of my experience on this campus. I’ve developed 20/20 vision in this supposed world of racial “color-blindness”; here, I’ve learned more about the implications and manifestations of fetishization, sexual or not, than anywhere else.

In year two of my college experience, I still find myself shocked when I’m asked “what are you?” more often than “how are you?” After years of living in Miami, a bubble of people who look and sound like me, I never imagined this would be such an imperative question. Perhaps people on this campus are intrigued by anyone who possesses even an ounce of melanin, or maybe it comes from a place of genuine curiosity. Regardless of the nature, the sexually charged “compliments” about my ethnic ambiguity being “cool,” the way I pronounce things sounding “cute,” or how it’s hot that I’m so short and thick, will never cease to repulse me. It’s not flattery—it’s flat-out disrespect.

Unfortunately, fetishism manifests itself in a variety of mediums: in politics, academia, entertainment, art, and—of course—sex. It’s humiliating to know your existence is seen as a trivial yet alluring prize, or worse, something that needs to be saved and conquered. The historical monetization, exploitation, and objectification of black and brown bodies is disturbing, and frankly, disgusting. As early as 13, I became aware of the hypersexualization of latinidad, blackness, and anything nonwhite in music videos and porn—an exposure not so suitable for a developing teen. I thought maybe this “sexy latina” stereotype was exclusive to Daddy Yankee music videos and taboo internet searches, but really, it’s everywhere: in the media, school—and particularly this one.

Columbia reeks of fetishism. This now-264-year-old stench lingers in every academic hall, dorm, and statue of a white man on campus. Whether it’s among social organizations and at parties, or in our mandatory literary courses, nonwhite individuals have to learn their own histories from the perspective of white professors who have suspiciously dedicated their lives to studying cultures that their own ancestors destroyed. Nonwhite students are presented with narratives of resilience curated to suit white-written course syllabi, and I’ve had enough.

In class, I’ve heard students describe Toni Morrison’s work as merely fictional “struggle-novels.” In these same classes, I see those students argue over who gets to give the most heartfelt commentary about blackness in discussion––through situations like these, you start to piece together the relationship between centuries of oppression and modern day “allyship.” When the Quetzalcoatl statues in Teotihuacan (which no one seems to respect enough to correctly pronounce) are described as “fantastic examples of native Mexican imagination,” you realize that indigenous art fascinates your white peers but will never amount to the Renaissance in their eyes. Soon, you learn that Gauguin's paintings of nude Tahitian women were not celebratory but rather objectifying, and that he ended up spreading syphilis to the entire island.

But, hey, according to your white art history professor––he was so talented, right?

It is important to note that this crime is not exclusive to white people and that they are not the only ones guilty of fetishization on campus. In fact, people of color engage in fetish-based sexualizations of other races and ethnicities just as much––but it may go unnoticed. The problem with minority groups partaking in these kinds of exploitative actions is a lack of awareness and accountability. People are afraid to admit that they are exhibiting toxic and invasive behaviors, or they simply choose to believe that because they are fetishized, they cannot fetishize.

I myself have been a perpetrator of gross glorification and appropriation of cultural traits that were not made for me to use. For instance, I am guilty of compulsively using lingo created by black Floridians––not only is it a form of fetishizing, but I’ve also never been disrespected, punished, or denied opportunities for using black Miami slang, while those who live and speak it daily do suffer the consequences. But part of growing as people and moving towards creating sustainable, safer spaces on campus and beyond is to analyze what we, and the people around us, have done wrong. It’s okay to realize that sometimes we’re the problem, or that our family swooning over mixed babies on Instagram is the problem, or that our one white friend who only seems to date another particular race is the problem. While it’s not our job to educate anyone but ourselves, we shouldn’t hesitate to call out such concerning mentalities, whether it comes from a white mouth or not.

So the next time you find yourself attracted to a person who doesn’t share your racial identities, or speaking in class about a topic you lack the personal experience to speak on, please think twice before you even say anything, and remember––to paraphrase the artist Dan Perjovschi, “We are not exotic, we are exhausted.”

The author is a proud Mexican-Cuban from Miami, Florida. She is majoring in art history with a minor in anthropology, and strives to create safe spaces for anyone who feels that Columbia and the world has placed emotional labor on their existence.