For the love of fencing—and the PE requirement

For the love of fencing—and the PE requirement 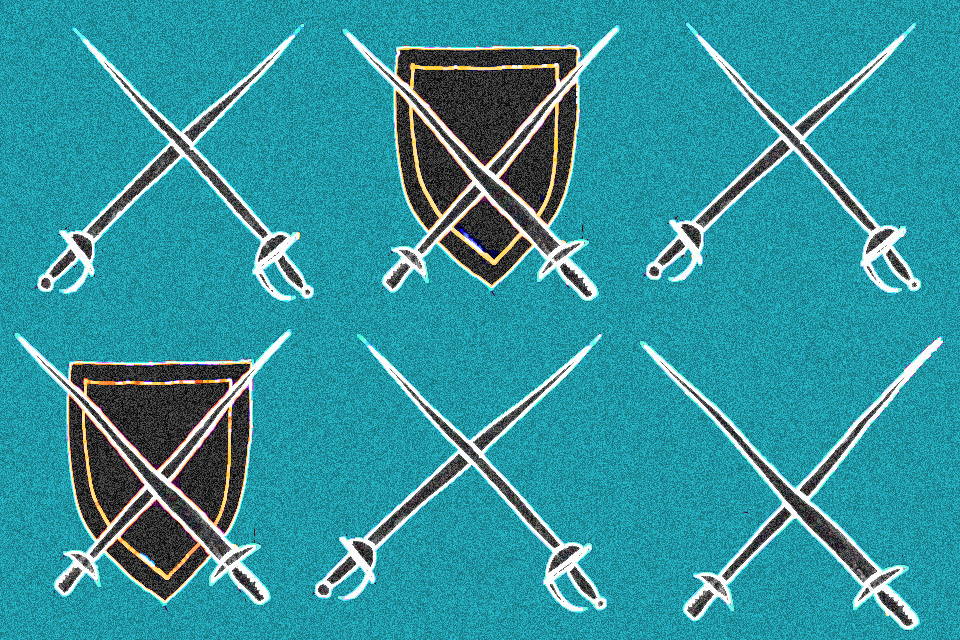 I go for a run maybe once every other week, mostly just to keep my mile time below eight minutes, and I have the upper body strength of a newborn kitten. So, as you can imagine, approaching my senior year with the knowledge that I still had two physical education requirements to fulfill before graduation, I was less than thrilled.

I signed up for fencing for two reasons. First, because I had recently watched The Princess Bride for the first time, and become enlightened about a whole slew of cultural references that I had heretofore been ignorant of. Second, because it seemed like a low-exertion class for beginners that would teach me about the sword play that I had always read and written about in fantasy novels. I figured at the very least, by the end of the class, I’d be able to choreograph the fight sequences in my own stories with some degree of accuracy. No one was more surprised than me when fencing class became one of the highlights of my week.

I showed up to the first “real” class—the one after the intro class in which we would actually start to learn how to fence—somewhat excited and somewhat apathetic. It’s a weird mix, I grant you, but it also pretty well describes how I feel about physical activity. At the end of the class, the fencing coach had us all circle up, put our hands in the center, and shout “CU” on the count of three. Suddenly, my brain flashed back four years to my days on the JV tennis team, when we would gather more to talk and play training games rather than actual tennis, and stand on the sidelines of every game until the last match was done. It didn’t matter to which clique or grade you belonged for those two and a half hours after school every day. We were all friends on the court.

Columbia is a place where it is sometimes difficult to find a sense of community, and while I was lucky enough to find a home with my first-year floor, fencing has given me a whole new community of people who I engage with, twice a week, while we stab each other with barely blunted weapons. Almost all of us were beginners when we started the class, and those who actually knew how to fence—without being asked by the coach—began to help out the weaker fencers by pairing up with us. Now, 12 weeks into class, we have all fallen into a rhythm of sparring with one another, both before and after class, calling out advice, adjusting each other’s grips, and cheering each other on through intra-class competitions.

More than just giving me and my classmates a sense of community, though, fencing has given us all a space where we can learn and laugh. We crack jokes about the plastic boobs—I mean, chest guards—that girls are painstakingly required to wear under their jackets, and laugh at how undignified we look practicing footwork. Sometimes, fresh off of senior night hangovers, we’ve lost the last of our dignity and resorted to waving our weapons around between two fingers, trying to hit each other, until the coach yells at us for waving our weapons around stupidly without at least having put on our helmets first. It’s the little things like that which make my PE class worth going to twice a week.

Like many of my peers I imagine, I spend so much of my time trying to look put together that it’s a wonderful release to have two hours a week where it doesn’t matter how silly I look, or how good or bad of a fencer I am. Waking up to go to class and fence against people––often with teammates counting on me or with my spot in the day’s class ranking at stake—gets me fired up for the rest of the day.

It’s easy to say that sports and working out are stress relief in their own right. But from my athlete friends, I have learned that the mentality of athletics as the sole focus of one’s identity and time comes at the detriment to friendships and relationships, particularly in an environment where the stress of competition can cause you to lose sight of the fun parts. But PE, full of beginners, allows you to regain the fun parts.

I went in to PE dreading the experience, thinking that this was the dumbest part of the Core Curriculum, but one semester later, while I’m still not sure it’s completely necessary, I definitely see its value. My teammates and I teach each other, laugh with each other, cheer each other on, and at the end of every class, share our successes and scream a highly spirited phrase in support of the fine institution which we attend. And I can say without a doubt that it is the only Core class which I have never once dreaded attending.

Columbia may not have yet perfected the art of balancing mental and physical health—or even putting the two on the same level of importance—but the PE requirement does actually give students the ability to physically challenge themselves in a safe, and (shockingly) fun environment. So rather than signing up for the easiest PE class, or calculating your maximum number of skips before you fail, try something new, and keep an open mind.

Sarah Fornshell is a senior at Columbia College majoring in English and officially no longer minoring in history. She apologizes for writing a piece about the Core, but would also like to formally challenge anyone who has an issue with it to a fencing duel. She is a member of Alpha Chi Omega sorority and a former deputy editorial page editor for columns. I Do Indeed Give A F*** About The Oxford Comma runs alternate Tuesdays.