The UAW Is at It Again

The UAW Is at It Again 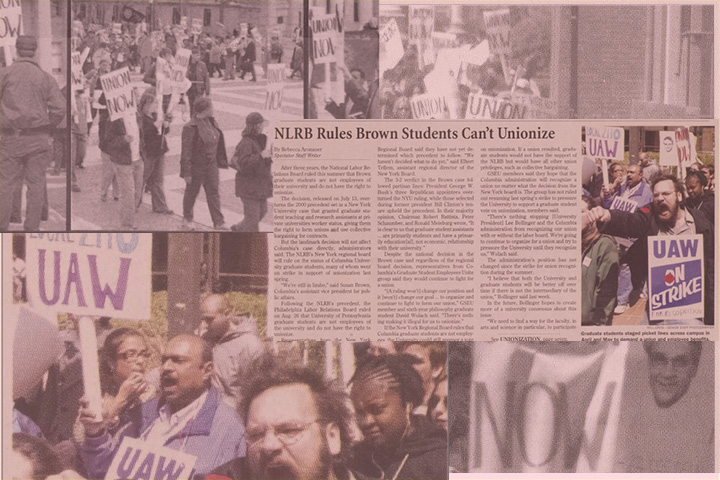 For two years, the self-appointed graduate student union has struggled to gain recognition at Columbia University, while the bulk of the graduate student body is content to await the results of the University's appeal to the National Labor Relations Board and the ultimate ballot count.

Convinced that it has a monopoly on democracy, the union has stepped up its poster campaign and is now planning to stage a full graduate-student strike. These steps show the extent of union duplicity and the union's callous disregard for due process and dissent.

The new poster proclaiming a "Majority!" is classic UAW deception. The average reader is fooled into believing that Columbia has dropped its appeal, that the ballot boxes have been opened, and that the UAW has been declared victorious. Nothing could be further from the truth. The majority in question is nothing but a stack of petition cards; the UAW aggressively solicits signatures from unwitting graduate students. The state senator who "certified" the UAW's majority is legally irrelevant to the process, and has no more authority in the matter than do any of us.

In truth, this poster proclaims nothing less than a rigged count. Elections with more oversight, transparency, and due process than this have been held everywhere from Florida to the Third World. No dissenters knew of the UAW attempt to gain certification, and certainly no dissenting votes could have made it into the UAW vote count. It is a small wonder that the posters modestly settle for a majority, instead of proclaiming unanimity. Perhaps that would have been too obvious.

Now, we hear that the union has decided to strike. This is nothing but an act of desperation. Since the union organizers began their campaign, they have seen year after year of incoming first-years receive growing funding packages and comfortable TA assignments. Faced with the reality that Columbia can continue to resist unionization as long as the NLRB remains silent, the union has chosen to deploy its weapon of last resort. And yet, even here, the process is rigged in the UAWs favor. Only students who have already signed prounion petition cards were eligible to vote on the strike. And those who did vote were asked to print their names on the back of their ballot envelopes.

So, once again we are faced with the spectacle of graduate students in picket lines, chanting tired populist slogans and circling ominously around a giant inflatable rat. But what good can possibly come of this stunt? It is not likely to change the minds of graduate students who remain uncommitted or opposed. Nor will it win sympathy among "undergraduates as the final weeks of the semester loom. Will it impress the parents who already pay too much in undergraduate tuition fees and no doubt care little about the dispute at hand? Or will it sway University administrators, who have already logged thousands of man-hours pursuing their legal recourse to oppose unionization? Not a chance.

Supporters of unionization may reply that none of these objections deal with the core issue, the legally recognized right of graduate students to unionize. There are many arguments against unionization, all of which received a wide audience during the election campaign two years ago. With hindsight, many of those arguments are stronger than ever. TAs and RAs continue to face working conditions so drastically different from instructors that no umbrella organization can reasonably represent both. Students in the hard sciences continue to receive funding packages utterly foreign to those typical of students in the humanities. And what of the supposed merits of a formal contract? For the fifth straight year in a row, graduate student stipends have increased at a pace far greater than anything a UAW contract could offer. Seen from this perspective, the threat of unionization has been a greater weapon than unionization itself could ever be.

So then, cui bono? Why does the unionization issue still have any traction at all? Opponents of unionization have long maintained that the most vocal activists at Columbia are merely well-intentioned progressives seeking to carve their own niche in the history of workers' rights. But a larger organization is at work here as well, financing the unionization campaign. While union memberships are dropping nationwide, the United Auto Workers is trying to branch out and secure its financial strength by co-opting graduate students. Any graduate student still undecided about the wisdom of joining the UAW need only consider its behavior at other universities, where strikes have been nasty and abusive. Opponents of unionization at Columbia have reported receiving threats of litigation and violence from supporters of a movement in which democracy does not include the right to say no. The “bargaining power” the UAW promises is not worth giving up the voice we already have.

The author was a graduate student in the history department.