The subtle things that bring Asian students together

The subtle things that bring Asian students together 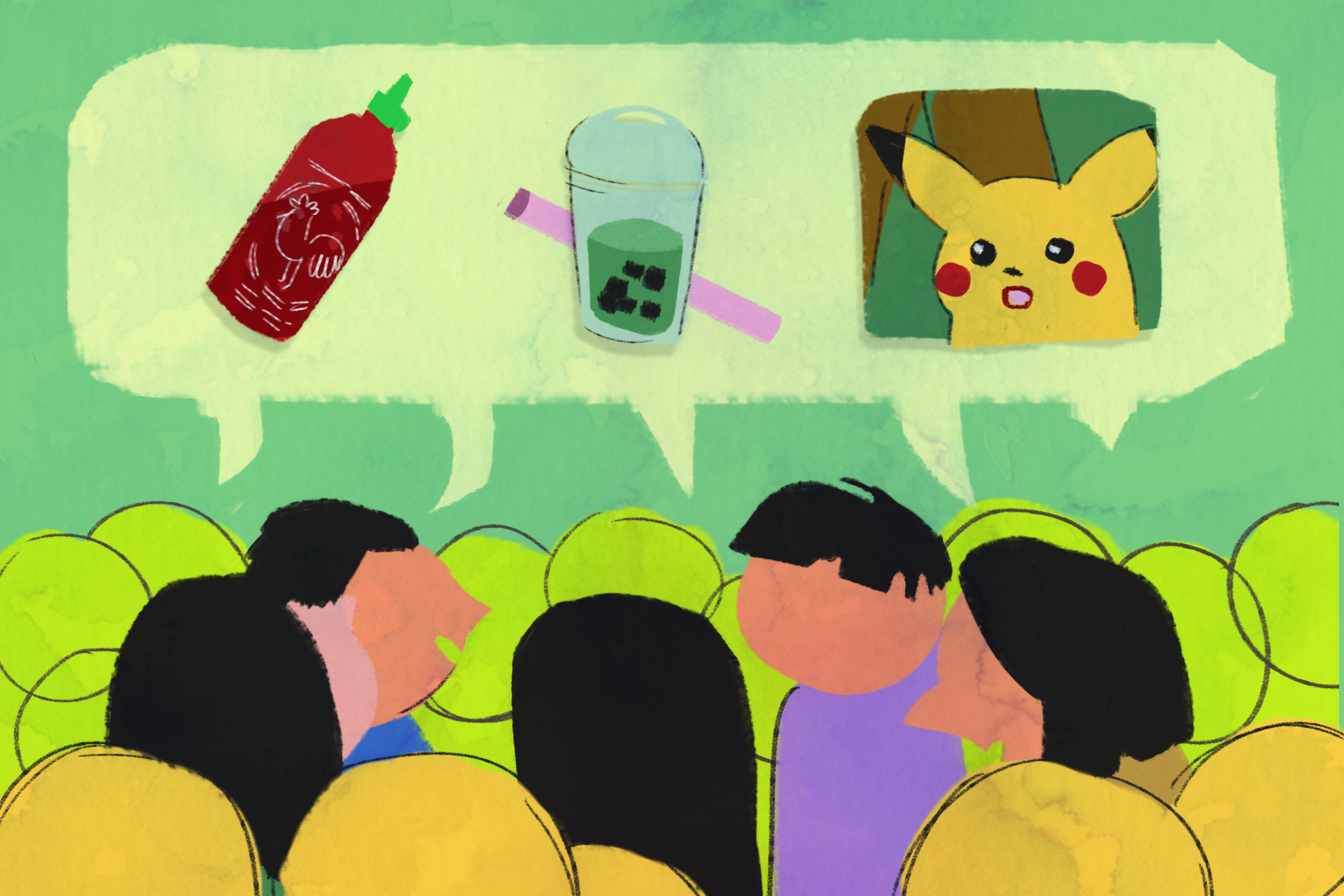 There’s a Facebook group that’s taken the Asian community by storm. It’s called “subtle asian traits,” and if you’re an Asian American, Canadian, or another child of the Asian diaspora, you’ve probably heard of it by now. (And if you’re not Asian, you might have heard of it too.) The group essentially consists of memes, jokes, and shitposts usually written out in Pinyin or romanization of other Asian languages. A majority of the content is about food, the emoticon uwu, Pikachu, boba, and more food—often in the form of debates over the best kind of Asian noodle or the best boba chain. (There truly is a lot of food content.)

Sometimes, there are posts about tougher topics that affect our community, like societal expectations or parental pressures to succeed. But all in all, over 800,000 members use it as a place where they can post about their experiences in quadrant meme formats or one-liner text posts.

And every Asian I know at Columbia is in it. Over 2,000 members in the group said they go to Columbia University. It’s such a ubiquitous part of the Asian experience on this campus that I even hear Asian students talk about it offline the way all of us talk about columbia buy sell memes, bringing the Asian community together through similar cultural experiences. Case in point: When I was in Milstein a few days ago, I overheard a girl shriek to her Asian friend “You’re not in ‘subtle asian traits’? What are you even doing with your life?”

I think, to an understated extent, “subtle asian traits” has unified the Asian community at Columbia. Even though Asians are the largest minority group on campus, it’s hard to feel like there is a strong community here if you’re one of the many people who aren’t in an Asian cultural club at Columbia. But “subtle asian traits” is important because it provides a community for those of us who aren’t in big Asian cultural groups like Korean Students Association or Chinese Students Club. When classmates I’m only Facebook friends with tag their friends in a meme I like, I connect with that person. It’s a little weird, especially if I’ve never even spoken to this person in reality, but when I see someone online share this experience—like buying a specific kind of hot sauce or playing Gaia Online at the age of nine—I feel weirdly validated. It’s like I finally can share or see my experiences represented in a visible way that not only encompasses Columbia’s Asian community, but the Asian community across the globe.

On a campus that is often criticized for its lack of community, Asian American students feel this deficiency particularly strongly, since we constantly struggle with exactly how Asian we want to be. We often grapple with the question of whether or not we should join an Asian-interest cultural organization, or if we should reject the “Asian clique” in hopes of being less obvious about our race. Should we actively try to make friends with non-Asians, or should we take comfort in the safe space of Asian friends that share the same experiences? These are questions I’ve thought a lot about in my time at Columbia so far, even more so when writing my pieces for Spec.

And there’s no right answer to any of these questions, either. It’s different for each person. However someone wants to participate and present their Asianness is completely up to them. Although, I do feel a little bit more comforted in my identity when I see Asian classmates lightheartedly tagging each other in posts. It tells me at some base level, I can connect with Asian Americans at Columbia, even those who I might’ve thought were different from me—all due to this shared upbringing or perceived Asianess. Even if we don’t talk, if you’re commenting on posts in “subtle asian traits,” I know I can relate to you to some extent.

I’ve written a lot about heavier Asian American topics this semester, including affirmative action, societal expectations to succeed, and self-segregation. I think it’s important—crucial, even—for Asians and non-Asians to keep thinking critically about these topics in the future. But “subtle asian traits” has made a lot of Asians proud of the little things that make us Asian. So I implore you, Asian Americans: take solace in these little things and be proud, in whatever way you so choose, to be Asian. In an environment where it’s so easy to get lost and feel alone, maybe these little things are exactly what we need.

Victoria Hou is a sophomore in Columbia College. She hopes this column helped you think a little bit more about Asian-American issues this semester. Chop Suey ran alternate Mondays.