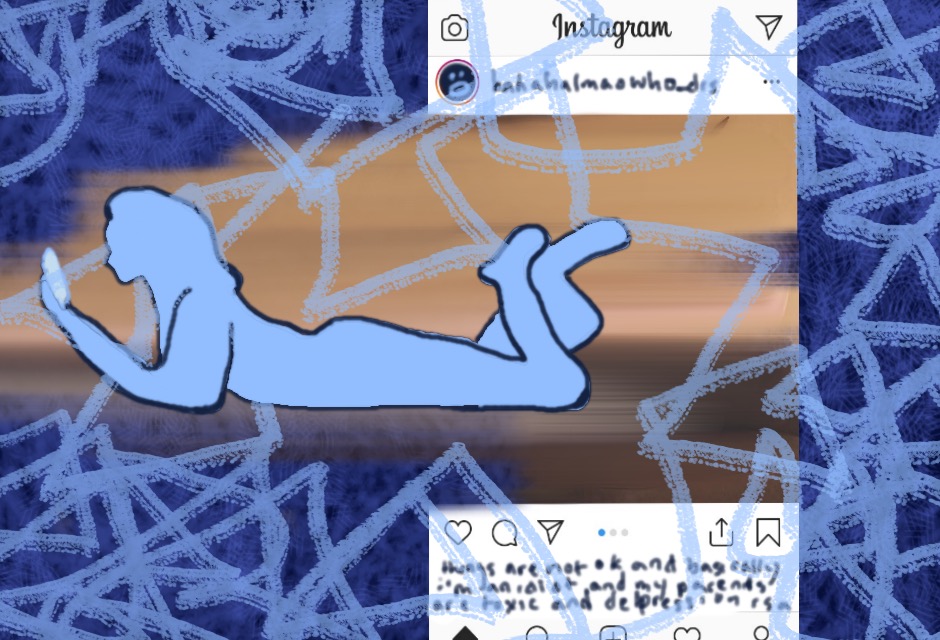 I spent my senior thesis coaxing an intimidatingly complex, endlessly fascinating brainchild into existence: an exploration of finsta as a mental health resource. This statement is not meant to be self-congratulatory. Actually, I’m somewhat haunted by the fact that I barely scratched the surface of this remarkable social phenomenon. But what I did piece together was both impressive and troubling, and to me, it holds significance for the Columbia community at large.

I tend to get a little ahead of myself when I talk about the research; so first, let’s lay some groundwork. Finsta, or “fake Instagram,” is a subculture on Instagram wherein users share some of the most intimate details of their lives with a select group using a secondary account. Social media platforms are not typically seen as places of authenticity and vulnerability, yet that’s exactly where the finsta community has oriented itself. Often described as a “public diary,” a finsta account offers people a place to share deeply personal information, process emotions, and request support or advice from their followers. DIY therapy wouldn’t be a bad comparison. And at Barnard and Columbia, finsta accounts are like Adderall plugs: If you don’t have one, you know someone who does.

The creation of my own finsta back in 2015 wasn’t prompted by a need for an emotional outlet, but an artistic one. That changed in the fall of 2016: I was in an unhealthy relationship, my father had been diagnosed with cancer again, and, of course, the political climate took its own toll. Before November 2016, I don’t remember how much my friends were sharing about themselves. But after the election, I became much more aware of the trend toward vulnerability, commiseration, and loving support. It felt like everyone I knew was fighting like hell to take care of themselves and each other. We were all looking for spaces where our fear, fury, and grief would be met with comforting words and rallying cries.

As it became clear to me over the course of my senior year, the prevalence of finsta accounts was indicative of the mental health crisis on campus. With limited access to professional mental health resources, a distinct lack of community, a culture of competition and stress-mongering, and a suicide rate nearly twice the national average for college students, Columbia students seem desperate for an emotional outlet. The immediacy, safety, and intimacy of finsta make it an appealing alternative to waiting two weeks for a counseling appointment and, perhaps, even well-suited to addressing the needs of students adjusting to the pressures of college life.

While I can obviously appreciate the value of finsta in providing respite from daily strain and struggle, I also feel it necessary to point out its flaws. For one, finsta can very easily become an “echo chamber.” Many of those I interviewed for my thesis felt that finsta culture promotes a level of unconditional support. This culture discourages people from calling out their friends’ unhealthy habits or mentalities, allowing and—in some cases—defending toxic behavior. This is a difficult line to walk, as people want to be able to share freely without fear of retaliation. Unfortunately, this sets many up for self-destruction.

While this social media subculture cannot take over the role of actual therapy, many students at Barnard and Columbia find themselves in a difficult position. Because the University lacks the structures and resources needed to sufficiently address students’ mental health issues, people are forced to seek emotional support—the kind typically offered by trained mental health care professionals—from communities like finsta. Here, people can safely and comfortably communicate their feelings to a trusted cohort. These online spaces may serve as valuable tools for building a counterculture that promotes growth, awareness, exploration, and care. But when it comes to addressing mental health on campus, finsta would be better suited to a secondary role—a resource supplementing counseling and other professional services that should be made as readily available as possible.

Interestingly, I’ve found that just six months after graduation, I use finsta very differently––mainly just for sporadic, surface-level life updates and streams of pretty pictures. I no longer feel the need or even desire to share the intimate details of my life on a social media platform, and part of me is breathing a sigh of relief. At the same time, I have left the safety of a space where I could confront what terrified me most and where I know that I would be met with empathy and compassion.

As a student, forgoing privacy seemed a small price to pay for the emotional support I craved––so small that it barely felt like a sacrifice. But when we are given little to no formal recourse for navigating one of the most stressful, unpredictable, and isolating periods of our lives, we have to get creative.

The author graduated from Barnard College in 2018 with a degree in sociology. Her senior thesis was called “Finsta: A Mental Health Resource for the Modern Age / How Finsta Culture Is Radically Reshaping Our Understanding of and Engagement with Privacy, Communication, Self-Presentation, Self-Expression, and Vulnerability.”