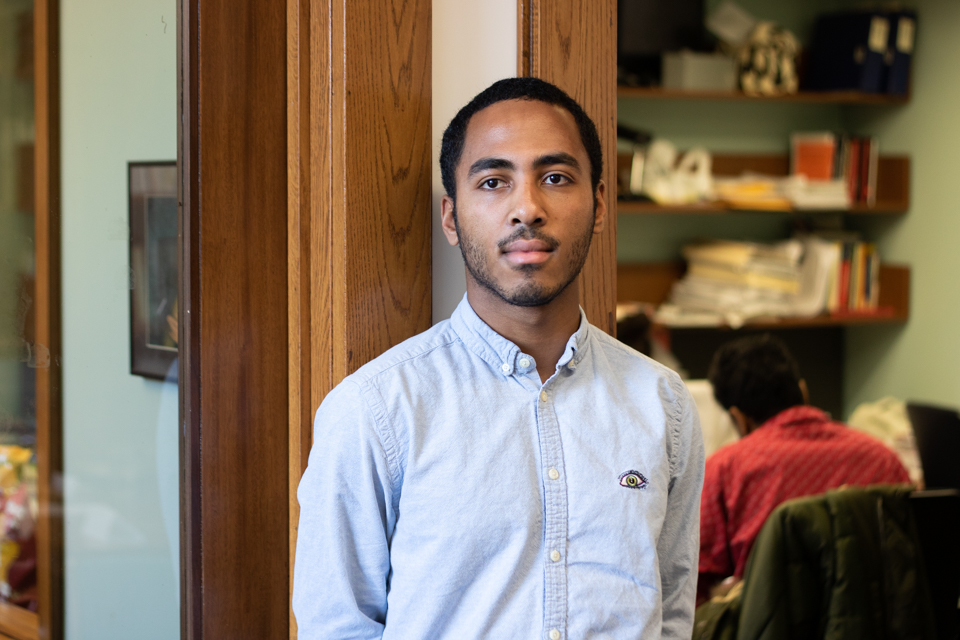 In the spring semester of my first year, I experienced racism on campus.

I was in the Writing Center at Philosophy Hall, waiting outside my professor’s office while he finished meeting with another student. As I sat there wearing a plain white tee, ratty black jeans, and a pair of worn leather shoes with mismatched laces, I noticed a pair of eyes glaring at me from across the room. Eventually the owner of those eyes walked over and asked, with barely concealed suspicion, “Who are you here to see?” I said my professor’s name and pointed to his office. But my answer didn’t seem to satisfy the man, so he entered the office and spoke with my professor to verify that I was telling the truth. No other student in the Writing Center was subjected to any scrutiny whatsoever.

Whether it’s driving while black, barbecuing while black, or swimming while black, many black people can recall a similar experience––a time when a white person treated them with suspicion because of their skin color. In those moments, when the sting of racism is fresh, it’s easy to become pessimistic about the state of racial progress in America. After my experience in the Writing Center, for instance, it might have been tempting to conclude that Columbia, for all its pretension to diversity and inclusion, functions, in effect, as a vessel for systemic racism.

But I didn’t come to that conclusion, and here’s why.

Of the thousands of social encounters I’ve had in my two and a half years at Columbia––with friends, professors, and administrators––only one of those encounters was racist. To pick a single social interaction and claim that it represents a larger trend is to make the same error that racists make: painting with a broad brush. For racists, a single scary encounter with a black person is enough to prove that black people are generally scary. I would be repeating their mistake if I treated a single racist encounter with a white person as proof that Columbia is generally racist.

In her well-known TED Talk, the novelist Chimamanda Ngozi Adichie warns about the “danger of a single story.” I fear that there’s a single story being told about black students at Columbia: We are all victims of white supremacy. Last year, a professor of mine told our class that “all people of color are victims of oppression,” as if this were an inarguable statement of fact. She went on to tell us that black people have historically been spoken for, and spoken over, by white people. I couldn’t help but notice the irony. She was a white person making a false claim about my lived experience––that I’m a victim of oppression––while simultaneously decrying the erasure of black voices by white people.

The truth is that racism has had no serious effect on my opportunities in life. Bigotry, in overt and subtle forms, has been an occasional nuisance for me, but it has never blocked me from accessing the doors to education, political participation, or economic opportunity. Although my experience doesn’t reflect that of all black people, it is shared by a substantial number. In a 2016 Pew poll, 51 percent of black respondents said that their race “hasn’t made much difference in their ability to succeed” in life. Among black Americans with a high school diploma or less, 60 percent agreed with the same statement. You could be forgiven for believing that all black people see racism as a fundamental obstacle in their lives, but many, myself included, do not.

The idea that all black people are victims not only fails to capture the truth, it also caricatures black opinion as monolithic. On the contrary, there is a rich variety of political opinion among black Americans. Black Democrats, for instance, are more likely to identify as ideologically conservative than liberal––30 percent compared to 28 percent––and more likely to identify as moderate than anything else, according to a recent article in the New York Times.

In recognition of the diversity of opinion within the black community, politically minded Columbia students have a responsibility to engage not just with opinions held by black liberals, but also with opinions held by black conservatives and moderates. Some students, however, believe that such opinions are harmful and therefore unworthy of engagement. Yet if the goal of “promoting black voices” is to be considered more than mere lip service, then it must also include, for instance, the 32 percent of black Americans who agreed with the statement: “Blacks who can’t get ahead in this country are mostly responsible for their own condition.” Whether you agree with the statement itself is beside the point. The point is this: A belief held by nearly a third of black Americans deserves more than a reflexive dismissal.

The existence of racism is an undeniable fact. But the relationship between racism, politics, and social mobility should not be treated as a finished discussion. Rather, it should be approached as an ongoing dialogue that aims to reflect the full spectrum of political opinions held by black Americans—and ultimately by all Americans.

The author is a junior at Columbia College studying philosophy. He likes reading, writing, and playing music. You can find him in John Jay Dining Hall listening to a podcast over a delicious meal.

To respond to this op-ed, or to submit an op-ed, contactopinion@columbiaspectator.com.