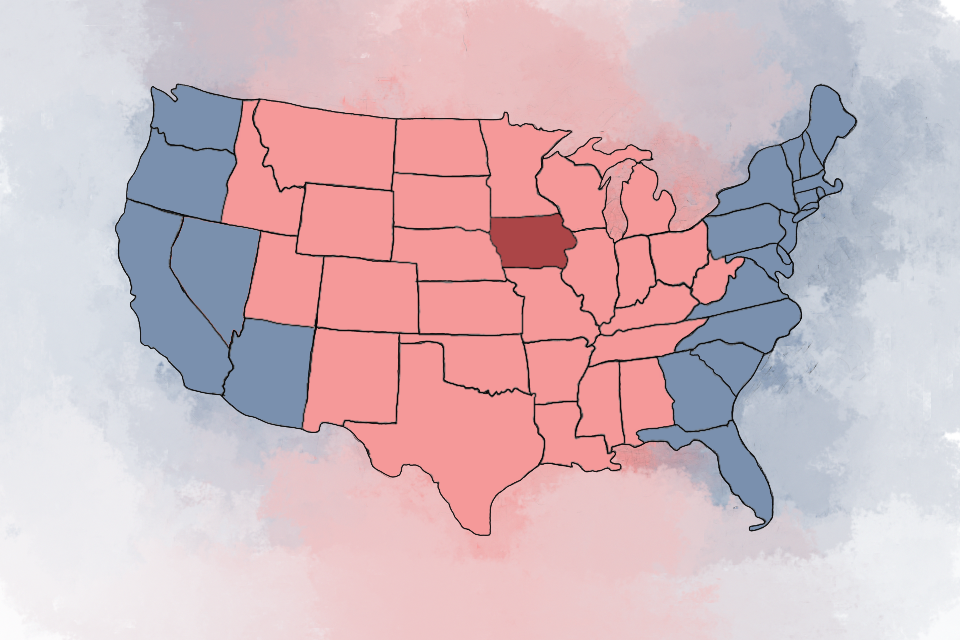 My best friend and I had an idea for a drinking game: You shoot a Nerf gun at an unlabeled map of the United States, and if you don’t know the name (or state capital, if you want an extra challenge) of the state on which your bullet lands, you drink.

While I lack the executive functioning skills needed to print a large unlabeled map of the United States, I still hope to someday play this game with my friends from the east and west coasts, because I know that they don’t know where any of the non-coastal states are.

My dad grew up on Long Island and went to graduate school at the Iowa Writers’ Workshop at the University of Iowa in Iowa City, Iowa. There he met my mom, they got married after seven years of on-and-off-again dating, bought a house with a porch, and raised me and my sister. When I tell people here that I am from Iowa, they ask questions like, “Do you live on a farm?”, “Have you ever tipped a cow?”, and “What is Iowa?”. I have given up on trying to give a frame of reference by explaining that it’s between Idaho and Ohio, because no one knows where Idaho and Ohio are either. Eventually I just say it’s in the Midwest. I live in a large university town of 75,000 people, and I have never known anyone who has ever tipped a cow. I’ve found that even the term “Midwest” can be cause for confusion; once my friend forgot it and called the Midwest, “the flyover states,” which at the very least shows she understands the general concept.

This strange, subconscious form of elitism leaves me with dual impulses—on one hand I wonder if I should forget my home and accept a tri-state centric view of the U.S., and on the other I feel like I need to do something to stop the propagation of Midwestern stereotypes. I am guilty of participating in elitism toward the Midwest. Of my graduating class of over 300 only about 20 of us left the state for college, and a part of me feels a sense of superiority that I am one of them. However, I also had the privilege of having a parent who was supportive of my desire to leave Iowa, and willing to pay for things like college applications and SAT subject tests, and the privilege of getting a shit ton (the only accurate descriptor) of financial aid. But still, I didn’t have access to test prep or a college counselor. Columbia never recruited at my high school. “Midwestern representation” is not accurate if most students are from the suburbs of Chicago.

The problem with Midwestern stereotypes is that many people from the Midwest fulfill them. Many people are racist, sexist, homophobic, scared of large cities, have tipped a cow, etc. But many people don’t. Many people are young (or old), liberal activists working toward making the Midwest a better and more accepting place. And it’s their work that is undone by these inaccurate or harmful stereotypes and elitism. When we write off the entire Midwest we also erase the work these people are doing to further education, access to healthcare, food security, etc. Having worked for national and local democratic political campaigns in Iowa, it’s frustrating to be asked by my peers if everyone I know at home is a Trump supporter. Every election season, major media outlets will send a journalist with their own implicit biases to the Midwest to report on the political climate, and every election season I read articles by journalists who seek out the most Midwestern-stereotype-fulfilling person they can, quote them, and write an article full of the biases with which they arrived.

This isn’t harmless; if Midwestern voters think the coastal elites and liberal media views them as unintelligent, they’re going to vote for those who don’t belittle their intelligence. Iowa is the first state to have a caucus and vote for party nominees: It’s incredibly important for the media to accurately report on the Midwestern political climate instead of trying to impress upon readers how different the people are. As a politically active youth currently living in a coastal city, I feel some responsibility to correct inaccurate Midwestern stereotypes among my peers, to empower the people with whom I worked on national and local campaigns with who are still there, and to try to change biases before they are printed in the New York Times.

Columbia encourages us to be high achieving and pursue careers at the top of our fields, so it’s entirely possible for students here to never leave the bubble of prep school, the Ivy League, and then some high-powered consulting job. So an appeal to those who’ve never left this bubble: You go to an Ivy League school—please take half an hour to learn where all the states are.

Liza’s relevant skills include knowing where all the states are and being the worst version of herself on Twitter at @casella_16. High Entropy runs alternate Wednesdays.