An analysis of the campus dialectic on jargon; or, what is good academic language?

An analysis of the campus dialectic on jargon; or, what is good academic language? 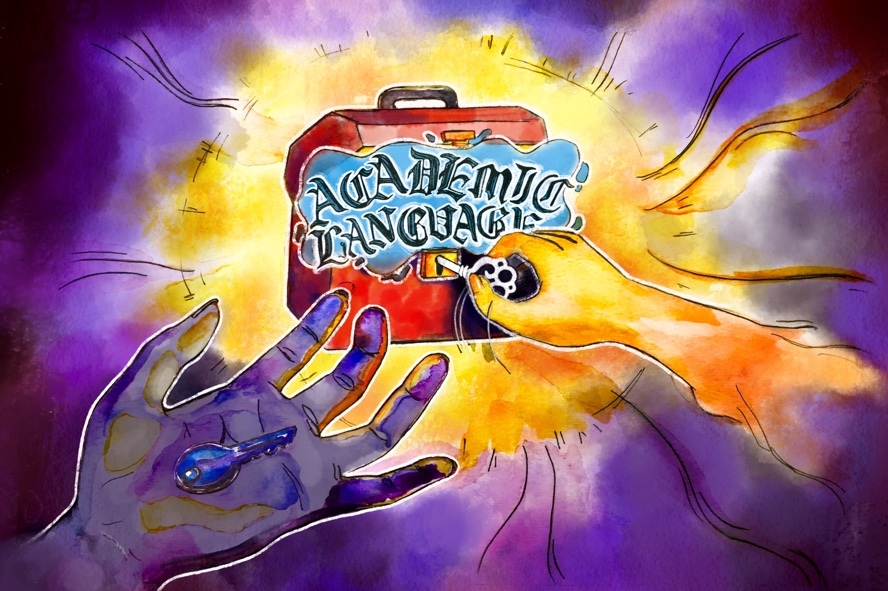 The first time I heard ontological in class, I ignored it. Epistemological soon followed, which—after a smattering of repetitions—merited a Google search. A semester or two later I tossed the hermeneutics of suspicion into one of my own papers.

Academic language—by which I mean jargon, or discipline-specific terminology—is a wide-ranging grab bag of words. In English, most of it is Latinate, stemming from the Norman invasion of 1066 when French merged with Germanic English. Some of it has become democratized enough that we don’t give it a second glance (dialogue, firewall). What we deem most “academic” are the terms imbued with a sense of foreignness, the terms used easily by our professors but fumbled by our tongues.

Every year, the initial exposure to academic terminology is a shock that reverberates through much of the first-year student body. Like some academic curse, once vocalized in Literature Humanities, the terms reproduce until classes, readings, and even the bathrooms of Butler teem with dialectical, dialogic, democratize. Where there was once no need for such terminology, suddenly academic language had become inescapable. (An academic explanation for this could be the Baader-Meinhof phenomenon.)

After my own dark baptism, I witnessed the effect of this phenomenon almost annually as editorial page editor of Spectator when, like clockwork, first-years would pitch op-eds about the “inescapable elitism of academia and its jargon” because, inevitably, some prep school ass-wipe abused ontological in class. Of course, the counter to this opinion arose semesterly as well, which amounted to “academic language is good regardless of elitism because it is useful.”

Both opinions are, in a word, misguided.

When much of your initial exposure to academic language comes from “That Kid” (who regularly uses ineffable wrongly and claims to have read Homer in the original Ancient Greek), and when your background includes a poorly taught class on “Catcher in the Rye” in a public high school of 3,000, it’s almost reflexive (not to mention defensive) to assume every use of academic terminology is encased in the stench of elitist exclusion. The opposite also holds true. The students who staunchly defend academic language are, understandably, passionate about academia. But like unease, comfort with academic language can be a product of background, and (anecdotally) those with more privileged upbringings find themselves more at ease employing this terminology in the classroom. Ultimately, neither side of the debate asks the critical question: What is good academic language?

Responsible models for how academic language can and should be deployed often come from our professors. But they can come from outside the ivory tower as well: An example I find delightful is the podcast Getting Curious with Jonathan Van Ness. Jonathan (from “Queer Eye”) brings experts on his show to discuss a wide variety of topics, from Saudi Arabia to Renaissance art to artificial intelligence. These experts adequately explain their terminology, but it is Jonathan’s constant and eager interruptions that make the show abundantly accessible to anyone listening. Posing as the learner himself, he asks “who was the Beyoncé of Renaissance art?” It’s a term (if we can call Beyoncé a term) that is immaterial to scholarly pursuit but illuminates the popularity of Michelangelo and Rafael to an audience which may know nothing about the period.

Good academic language—by which I mean useful academic language—is about precision, which is, ostensibly, about clarity. Precise language is necessary for specialized understanding, which has little to do with posturing and everything to do with furthering academic study; these are terms used to illuminate rather than intimidate. If an article is published in a medievalist journal, the writer can assume that their readers will have enough of an understanding of medieval literature and culture that transubstantiation can remain undefined, and more rhetorical space can be spent on the actual argument of the piece.

But academic language is only useful insofar as it can be understood within its intended sphere. Good academic language is also context dependent; It would be inappropriate for someone on Getting Curious to use transubstantiation without defining it. Discussions about academia and discussions within the University are, almost by definition, academic. To expect otherwise is to misunderstand the role of the classroom. But there is no need to employ the platonic lens at a Midtown club.

Good academic language, then, is about both precision and accessibility. A first-year undergraduate confused by the terminology in a professionally-published scholarly article does not betray a fault in the scholar’s use of language. Rather, it simply means the first-year is a student who is learning those terms and their uses. (I still routinely look up ontological and epistemological, and will likely continue to do so until I keel over or earn a Ph.D.)

Academics are not infallible and neither are our classmates. As inheritors of this lineage of academic language—which we inevitably are, attending Columbia—we should rigorously interrogate whether it is being used appropriately, not whether it is itself appropriate regardless of circumstance. We should be editors of our own speech as well, careful not to flippantly employ terminology without both proper understanding of its meaning and the spheres to which it belongs (lest we perpetuate unnecessary opacity or worse, buttress pseudo-intellectual opinions).

Hannah Barbosa Cesnik is a Columbia College senior majoring in English and concentrating in art history, and is the former editorial page editor and staff director of Spectator. She’s really tired of having this conversation, and would like us all to move on with our lives. You can tweet her @HBCesnik. The Tatler runs alternate Wednesdays.