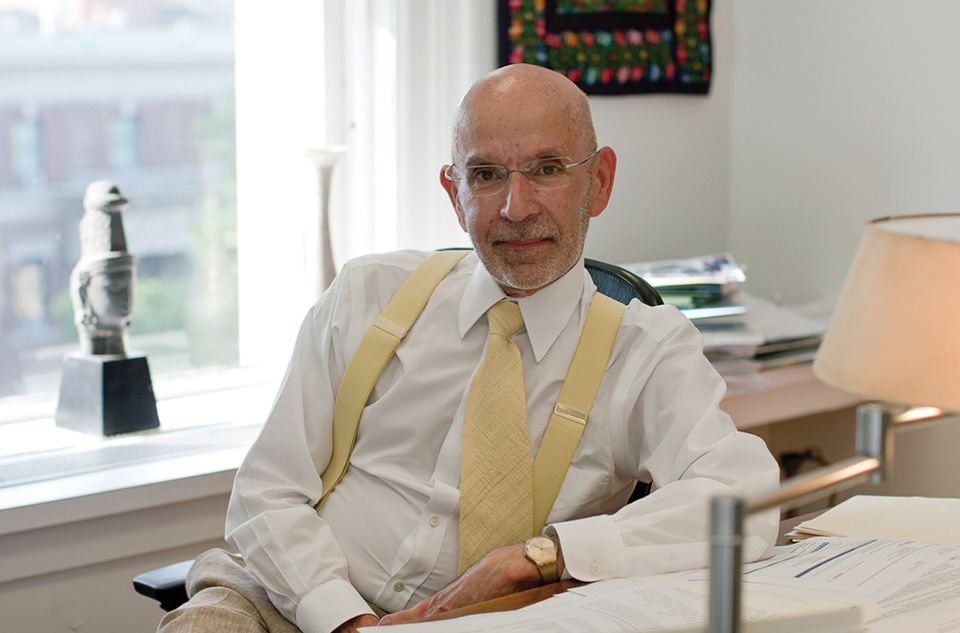 A leader, mentor, professor, and friend to countless people in the Columbia community, Dean Awn will be remembered for his tireless dedication to helping others. To help tell the story of Awn’s impact on Columbia, we invited you to share with us your favorite memory of him. This edition is part two of your submissions, focusing primarily on Awn’s time as Dean.

I didn't know Dean Peter Awn that well, but I think one experience pretty much sums up the depth of his character.

I was with my wife (then girlfriend) walking down Broadway when we passed by him. He was characteristically enthusiastic when he saw her. He asked who I was and introduced himself. When I told him I was a student, he was a little bit embarrassed but gave me a warm greeting nonetheless. I truly didn’t know him much better beyond the fact that he always wore colorful socks and sandals with his suits.

Two days later, he emailed me saying he wished he’d known who I was and that he was excited to see a GS-er holding a position on the managing board of Spectator. He invited me in to speak with him.

The conversation was slated for a half-hour. I figured it'd be the standard, patronizing banter I’d grown accustomed to, but it was far from it. We spoke for about an hour and a half, and not once did the man look at his watch. We talked about everything from his acquaintanceship with Hunter S. Thompson’s widow to the politics of Iran in World War II to the problems facing Columbia Athletics. I walked away feeling heard, and that's a rare thing in such a place. He owed me nothing, but in that moment, he gave me everything he had.

Dean Awn, I wish I had known you a bit better, but I feel so fortunate to have you remind me that folks like you do actually exist. — Kyle Perrotti

I graduated in 2013 with an anthropology degree, but most of my time at Columbia was spent in political science. I was about to enter the second half of my junior year and had a serious crisis of major. Dean Awn refocused me, made me laugh (comparing socks), and helped put me on course to graduate on time doing something I loved. He was there for me not only regarding my classes, but with every step I made on my journey at Columbia. — Nicole Trifiletti

My first year at Columbia was Peter Awn’s last year as dean. It was an exciting but overwhelming time, and Dean Awn couldn’t have been more welcoming and supportive. What was remarkable was his ability to remember names. On our second meeting, he shook my hand and said, “Ben, you have a powerful story; we’re lucky to have you here.” I’ll never forget that. — Ben Appel

I flew into New York for the very first time, straight from my country, during orientation week. I felt overwhelmed and a bit frightened by the unfamiliarity of my new surroundings; I wasn't sure what to expect. Dean Awn’s smiling face was the first to welcome me into Columbia when I entered the lounge for the first time. His reassurance, encouragement, and interest in me and my goals and aspirations made me confident that I fit in here and I belong. He was the first face I saw when I came to Columbia, and I will always remember him as the one who made me feel welcome when I first arrived. — Tamta Arakhamia

I have always wanted to have a talk with him, a person who I admire and respect, but I did not have the chance, which is the biggest regret in my life. — Chenzi Song

When I was at CU, I was heavily involved in student life as a Barnard student, especially the growing mental health awareness, wellness, and anti-sexual assault movements. Many of the CC/SEAS deans didn't give me much time when I requested meetings for various student organizations, but when it came to GS, Dean Awn was different. He made me feel seen, even though he had no purview over me as a BC student, and supported all of the work I brought to him. He always smiled at me and made me feel welcome, which got me through many a tough moment during undergrad times when I considered dropping out, transferring, or worse. While we often criticized administration for their emphasis on policy over person, Dean Awn was the one rare exception. — Rakhi Agrawal

It was Dean Awn who sent me the letter congratulating me on being named a salutatorian of the GS Class of 1999, and, as you’d expect, it was imbued with warmth, encouragement, and enthusiasm—qualities familiar to all of us who were fortunate enough to make his acquaintance. The time I spent with him in his office practicing my speech and incorporating the improvements he suggested so wisely and graciously was among the highlights of my time at Columbia and a memory I cherish. I feel deeply the loss of such a kind and good man, truly a beautiful soul. — Gary F. Edwards

Peter was such a mensch and such a force for good in the world. I once wondered if I could apply for a dissertation grant. Peter: “Of course! You'd be wonderful!” (I got the grant.) For me and so many other people, he was the wind behind the airplane that pushed you forward. I try to emulate his positive energy—but that ticklish ironic humor, you can't bottle that. I will miss him so much. — Greta Austin

I first met Dean Awn at Homecoming 2016 and felt like we were old friends that had known each other forever. He had the kind of warmth and inclusiveness that made you feel loved. We took a selfie to send to our mutual friend, Justin Nathaniel Carter, GS ’14, and had a laugh that he would have loved to have been in the picture with us. I only met him briefly but can appreciate the void left by his passing, though his legacy will remain. — Susie Grant Owen

To respond to this piece, or to submit to an op-ed, contact opinion@columbiaspectator.com.