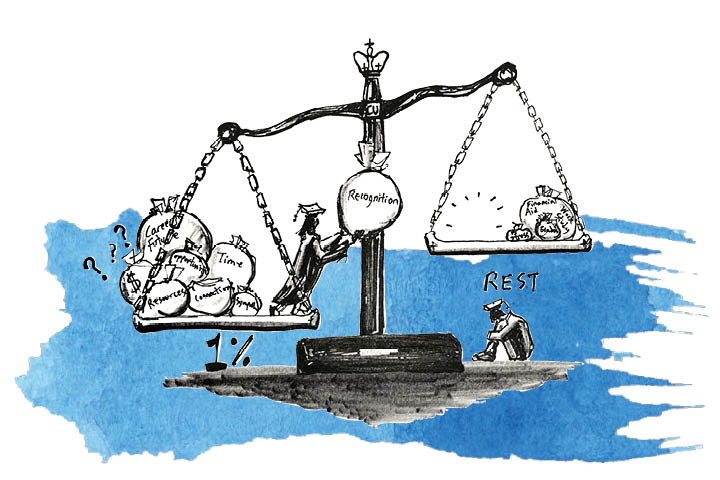 A few days ago, amidst all the “I’m baby” memes on Twitter, I came across the Forbes article that applauded Kylie Jenner for being the “Youngest Self-Made Billionaire Ever.” I HAD TO SCREAM! There is absolutely nothing “self-made” about her, a statement that even Dictionary.com agrees with. While any opportunity to drag the Kardashians is guaranteed to be entertaining, I noticed that this controversy, in particular, emphasizes the problems with meritocracy—and the debate surrounding it, which pervades Columbia and its culture.

In a meritocracy, individuals hold sole responsibility for their economic success, or other benefits, through their merits. That is: are they talented enough? Have they worked hard enough to deserve better without any help? Relating this philosophy back to Kylie Jenner, an Independent article argued that, “While some argue [she] isn’t worthy of being described as ‘self made,’ because she was born into a family that had a huge global platform, she has undoubtedly worked hard for her fortune.” The use of “working hard” to justify this title shows how this definition can become hazy and subjective. What exactly does “working hard” entail? Did she really work harder than each of the 39.7 million individuals in the United States that lived in poverty in 2017? According to Forbes’ reasoning, did those people not work hard enough, and hence, deserve to be poor?

I see many parallels within arguments that defend Jenner being “self-made,” and the belief that we were accepted by Columbia because we worked harder than most to deserve our place here. The common denominator? Meritocracy. I mean, how can people like us not feel this way when our entire application consisted of us outlining our greatest achievements to prove that we were worthy of such an elite education? That we were a select few that really “stood out” in a pool of thousands and caught the admissions officers’ eyes?

Barnard and Columbia conflate an elitist mode of thinking with the notion of inclusivity by applying need-blind policies. By implementing such protocols, both institutions justify their students’ acceptances on the basis of their merit, rather than on systems of oppression that advantage some over others. However, meritocracy mistakenly disregards that merit (or at least what authority figures deem as such) and class are inextricably linked. This relationship explains why 65 percent of Barnard’s student body hails from the top 20 percent of America. In comparison, only 6.6 percent of students at Barnard represent the bottom 20 percent of earners. Likewise, 62 percent of Columbia students come from families that make more money than 80 percent of the nation, compared to the 5.1 percent, whose income brackets are within the bottom 20 percent of American earners. Not only are these numbers emblematic of the significant wealth disparity on campus, but they also do not accurately reflect the income distribution across the country.

I do not believe that elite schools such as Columbia and Barnard are truly need-blind. Socioeconomic status contributes to a myriad of factors that go into our applications; one can easily make an educated guess about an applicant’s socioeconomic status through their essays, extracurriculars, and life experiences. If need-blind policies were real, there would be a random distribution of wealth year after year. Instead, there is clearly a significant number of wealthy students on our campus. The only other explanation for these extreme wealth disparities at Barnard and Columbia that I can think of is that perhaps more wealthy people apply to these institutions.

But what is this saying to us? That greater value is affixed to wealthier students' merits and labor and that these institutions are not doing enough outreach to lower-income communities to show them that their achievements are just as worthy. Either way, both institutions indicate that their perceptions of merit, intelligence, talent, and hard work lie within boundaries that are only attainable to the rich. Kylie Jenner is a prime example of how the “hard work” of the elite is deemed more valuable than other types of labor associated with the working class, such as physical labor like construction and agriculture work.

Meritocracy is a myth, and as Solange beautifully sings on her first track of her new album, “When I Get Home” (which you should definitely listen to if you haven’t done so already), we are seeing things we imagine. As a low-income student, it is much easier for me to imagine that I worked harder than most people in my community to end up here. Yet, that is not the case. Although I have worked extremely hard to get to this elite institution, this does not mean that my labor should be considered superior or valued more than that of the people I know back home in Los Angeles. These people work just as hard, if not harder, to provide food and basic necessities for their families, whereas I work to maintain my academic success. A lot of them simply didn’t have the resources, access, or privilege to attend a boarding school like I did.

So take a minute to ask yourself, do I actually deserve to be here? Or have the systems of oppression worked in my favor and set me up to have everything that an elite college considers to be an indicator of success?

Though this column typically runs in Spanish, the author thought that it would be better to have it published in English this week, so the larger community addressed could understand and read it. If you would like to further discuss how meritocracy shapes Barnard/Columbia, send her an email at dzo2101@barnard.edu.