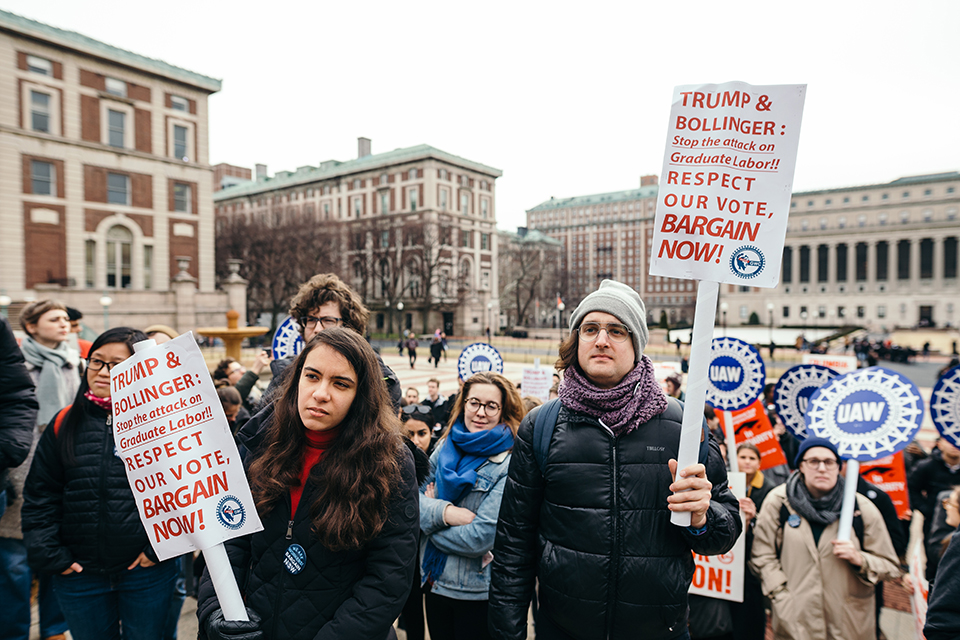 Last month, teaching and research assistants across campus accomplished what few thought we could: Our union began collective bargaining with Columbia University. Like most first contract negotiations, it’s been a slow process. Our Bargaining Committee articulated our goals—which were ratified by our membership with 91 percent of the vote—in our first bargaining session with the University on Feb. 25. Both parties agreed to meet again on March 6, only to have Columbia cancel at the last minute.

It is because of this that we, as part of a group of teaching and research assistants from each GWC jurisdiction, call for a reexamination of our strategy as articulated in the referendum last month on bargaining over academic holidays.

We need more time for bargaining. In general, less than half of new unions nationwide are able to negotiate their first contract within 12 months, with 25 percent requiring over three years to secure a deal. We face an intransigent administration that has fought our movement tooth and nail, only agreeing to bargain when faced with the threat of a sustained strike, as well as the anti-union legal firm it retained as representation through negotiations, Proskauer Rose LLP. Columbia has stuck to its long-standing strategy of delaying our access to a contract, presumably hoping that by endless delays, it will get rid of our movement.

Without bargaining over the summer (as stipulated in the “holidays” referendum), we task ourselves with addressing all of the important concerns of our union before our contract deadline on April 6, 2020—a mere eight months. This is a daunting feat, and the odds are against us in achieving it.

Instituting a no-summer-bargaining policy puts our union at risk. Columbia’s Proskauer lawyer noted at Thursday’s bargaining session that the university would view a three- or four-month suspension of bargaining as “not in good faith.” Unfortunately, the law is on their side. The National Labor Relations Board describes bad faith as “fail[ure] to meet with the employer at reasonable times and reasonable intervals” while working toward a contract. Should Columbia choose to file suit, it will expose our union to an unfair labor practice charge from the National Labor Relations Board.

An even greater concern is that Columbia could use our failure to bargain over the summer as an opportunity to back out of the framework agreement that brought us to the table, a possibility implied by Columbia lawyers, since the framework is predicated on both sides bargaining “in good faith.” Last semester, we ratified the Framework Agreement by almost two-thirds in favor with a majority participating. Failure to uphold this agreement would not only violate the democratic will of our union, but would also leave us back where we started last year—ending bargaining and union recognition for student workers at Columbia.

Potential consequences aside, this referendum’s framing does not reflect our workers’ experience. For most of our union, the summer is hardly a holiday. Some of us travel abroad to learn a language, others focus on writing, and many conduct research. The majority of our union are RAs on 12-month appointments, who work alongside TAs with summer appointments. Many of these workers will be able to attend bargaining and participate in union activity during this time. Bargaining over the summer would be a valuable way to mobilize all sections of our unit, and we need the full union engaged in order to keep Columbia accountable.

What’s more, the procedural precedent set by the recent referendum is concerning. The finalized referendum language was announced to the unit less than a week before the election, and voters were offered no summary of potential advantages and disadvantages of the available options. This runs counter to past practice in our union, as we previously solicited feedback before developing ballot language to offer better democratic access. Other graduate unions, including the Union for Graduate Employees at New York University and the University of California Student-Workers Union, require a consultative process in drafting referendum language before a vote is called. As a result of the procedural irregularities of this approach, the negative consequences of refusing to bargain over the summer are only now coming to light.

There are also strategic disadvantages to rejecting summer bargaining in relation to our sister union, the Columbia Postdoctoral Workers. CPW has already committed to bargaining between the spring and fall semesters, consistent with the year-round presence of its membership. If we refuse to bargain over the summer, we will lose the strategic advantage of pushing together with the postdocs on shared goals, weakening our leverage. At the same time, the administration could impose the postdoctoral contract terms agreed upon during these meetings on GWC as a ceiling, limiting what our Bargaining Committee can achieve.

We urge all those concerned to sign our petition calling for a reassessment of our summer bargaining strategy. We’re calling for this through petition because the solution to one snap referendum is not another snap referendum. Rather, we want to support the Bargaining Committee, which was democratically elected, in exercising its discretion to act on behalf of the union as a whole.

It’s taken 17 years, many generations of students, and the participation of over 1,500+ workers in our strike last spring to win a seat at the table with Columbia. We’re finally sitting at the bargaining table—demanding a contract that improves our working conditions, one that will give us, among other things, a real grievance procedure with recourse for harassment and discrimination. We deserve a fair contract—let’s give the Bargaining Committee enough time to get us there.

The authors are organizers spanning all five representative jurisdictions of the Graduate Workers of Columbia.