Our union must remain democratic

Our union must remain democratic 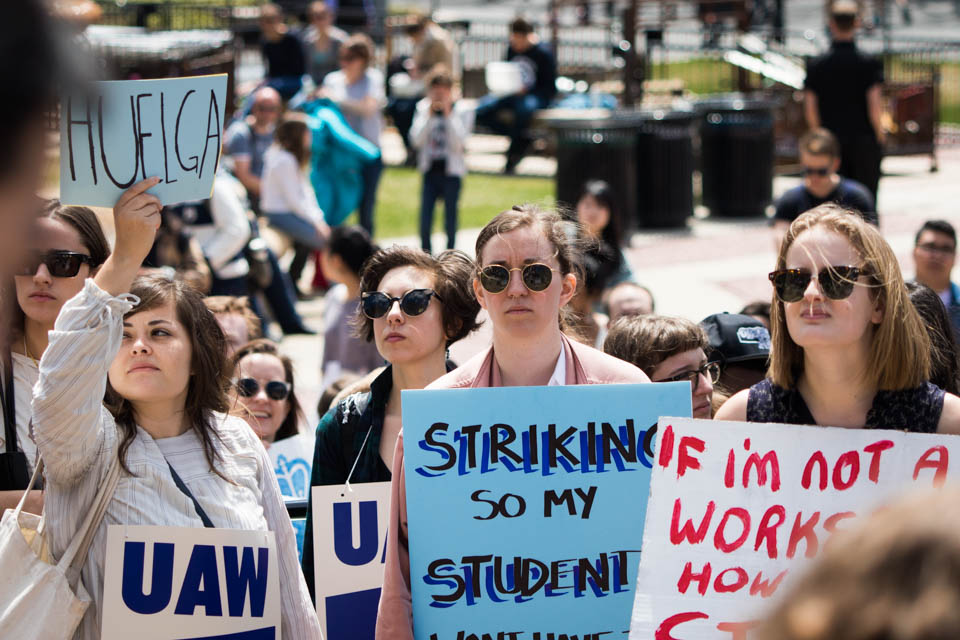 On Feb. 6 and 7, members of the Graduate Workers of Columbia-United Auto Workers came together at the ballot box. We elected new members of our Bargaining Committee and voted overwhelmingly in support of two provisions to ensure open and transparent bargaining between our union and the Columbia management. The referenda were a precedent-setting victory for our union members. We sought to learn from previous negative experiences in other academic unions, when key aspects of negotiations with employers took place over the summer while large numbers of workers were not on campus. The practice was especially problematic in the case of the University of California’s graduate workers, whose most recent contract—by most indications a losing and regressive one—was negotiated and voted on during the summer of 2018.

Now, only weeks later, a petition is afoot to circumvent the democratic process and give the Bargaining Committee the illegitimate authority to ignore the referendum against bargaining over the summer. This petition is much more dangerous than an attempt to influence the opinion of workers within GWC-UAW; instead of calling for a re-vote on summer bargaining, which would be a reasonable course of action, the petitioners explicitly reject this option. In seeking that the Bargaining Committee undermine a union vote, the members behind the petition are setting a dangerous precedent within GWC-UAW, one that allows any democratic decision of its members to simply be sidestepped and ignored if the union’s leadership sees it fit to do so. A one-sided petition is not a substitute for a democratic vote.

To be sure, the voting process within the union has never been perfect. For instance, November’s vote on Columbia’s proposed framework for bargaining commenced after only two day’s notice and took place over a Thanksgiving weekend. This gave much less time than the notice provided by February’s referendum, which was just under a week. Previous referendums have also lacked summaries of potential advantages and disadvantages resulting from the approval of their provisions.

Why focus only on the shortcomings of this one referendum, when many votes have been lacking? We need to improve the voting process as a whole to ensure the integrity of future union polls rather than undermining the decisions we have already made. The rejection of summer bargaining itself was widely supported by GWC-UAW members, garnering an overwhelming 71 percent of the vote. The preparation of the referenda went through consultations in three separate general body meetings, and the drafting of the language included the participation of some of the key organizers of this new petition. Crying foul more than a month after the fact strikes us as disingenuous.

Due to this alarming prospect, we hope that making our voices heard on this platform will call attention to the stakes in what would otherwise be an innocuous and uncontroversial petition. The divisive nature of this petition has mobilized two different letters from GWC-UAW members, addressed directly to the Bargaining Committee. One is a collective letter from graduate workers in the Middle Eastern, South Asian, and African studies (MESAAS) department, who are required to leave for training and research during the summer, as part of their graduate program. The other is a letter from undergraduate teaching assistants in computer science, who, like most other undergraduate workers, have generally been neglected by the union and would feel further excluded by summer bargaining. While it may be true that much of our unit works over the summer period, the petitioners’ call to bargain during this time is certainly alienating towards hundreds of our union members who cannot afford to live in New York during the summer months. Critically, these workers’ absence during the summer would weaken us at the bargaining table, which needs the attendance of the strongest possible numbers of rank-and-file workers.

The recent op-ed by the organizers of the petition is misleading when it asserts that we have an April 6, 2020 deadline to negotiate a contract. Rather, this date is when the no-strike framework provision for bargaining is set to expire. On this day, if an agreement has not yet been signed, we will regain our leverage to pressure University management towards a strong contract for unit workers. As much as we aspire to sign a contract sooner rather than later, we do not want to do so at the expense of negotiating a strong contract; the experience of academic workers at the University of California, whose contract was ratified in contravention of union by-laws, shows that summer bargaining may very well imperil this aim.

Finally, the claim that Columbia management needs an excuse to back out of the framework agreement is misleading. It put forward the agreement because it feared the consequences of our planned strike last December, and reneging on the framework on such dubious grounds would merely result in another strike threat. In reality, management needs this framework more than we do.

We hope that this open letter serves as an opportunity for the petitioners to reconsider their ill-advised attempt to circumvent established democratic processes within GWC-UAW.

The authors are undergraduate and graduate union organizers with the Graduate Workers of Columbia.