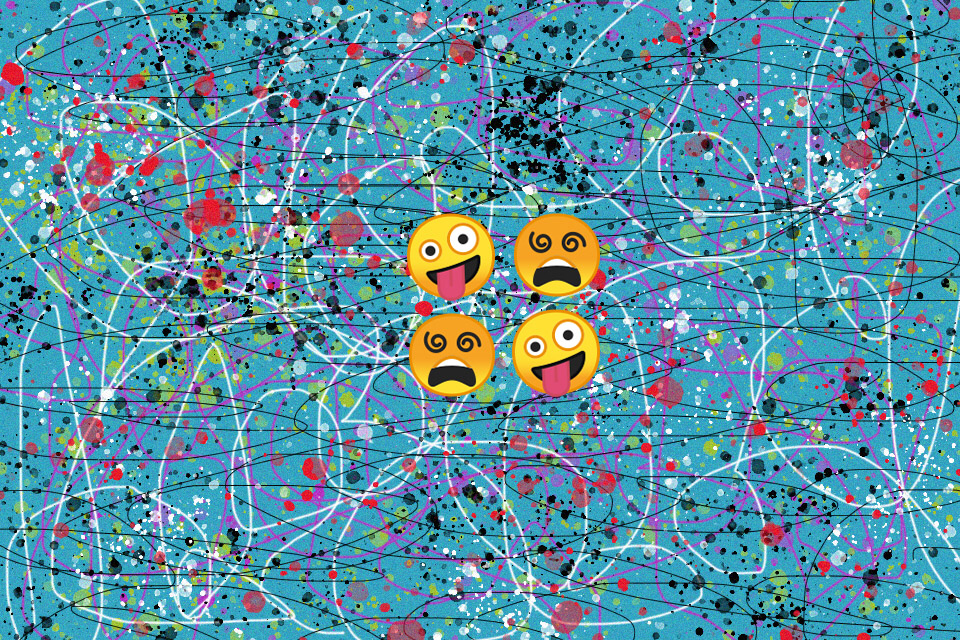 “Dude, the craziest thing just happened to me. I was sitting in Butler and all of a sudden, somebody tripped over a backpack on the ground next to my chair and spilled their bubble tea all over my computer.”

“Holy shit, are you serious?”

“Oh my god, that’s insane! That’s so crazy! What happened after?”

“Hey, so how was your date last night?”

“Uh, it was kinda weird. We went to dinner, which was great, and then we stopped by 1020 to see some friends. This guy she used to hook up with was in the bar though, and after she ran into him she was just acting really, like, crazy. It was like I had never met her before. I didn’t want to talk to her at all after that.”

“My ex-boyfriend was a really nice guy until he cheated on me. His mom was super crazy, though.”

“What do you mean? Did she have some kind of mental health issue?”

In the first conversation, “crazy” means what we use it to mean most of the time. Something “crazy” goes against our expectations, annoys or frightens us, causes us stress, or is just simply unbelievable. In the second and probably the third interactions, “crazy” is used, whether consciously or unconsciously, to belittle the dispositions and/or mental health of women. It’s my intuition, despite the etymology and history of the word, that most of us don’t intend to invoke misogyny when describing our lives as “crazy.” Fair. But we should still be conscious of the judgment historically implicit in the word before ascribing it to anything and everything, especially other people’s behavior. And here at Columbia, where we’re supposed to be finely attuned to the difficulties of mental health, we could really expand our vocabulary.

As with most words, the meaning we now associate with “crazy” has relatively little to do with its first attested meaning: “diseased [of body], sickly,” or “broken, … full of cracks or flaws.” We can assume with fair confidence that its meaning “deranged, demented, of unsound mind or behaving as so,” which first appeared in the early 17th century, comes from the verb to craze (someone), which meant “derange the intellect of, make insane,” by the late 1400s. You feel me?

Back in the olden days, of course, mental health was not well-understood, if taken seriously at all. Doctors, who were almost all men, made up all sorts of jargon to explain the experiences of patients with symptoms of what we’d now call personality disorders, mood disorders, or other mental illnesses in terms only doctors could understand. A couple of our modern-day synonyms for “crazy,” like “hysterical” and “loony,” were first used as medical diagnoses.

“Hysteria” was (until 1980) a legitimately recognized neurotic condition peculiar to women that had no unique cause and no unique set of symptoms. Lacking any feasible physiological explanation, doctors pronounced it an ailment of the uterus and removed this organ from countless “hysterical” patients. A “lunatic” was someone whose mood altered dramatically with changes in the phase of the moon. It’s hard to ignore the association with menstruation, especially in light of the fact that countless women were confined to mental asylums under bullshit pretenses and unable to advocate for themselves. “Hysterical” and “loony” are contemporary synonyms for “crazy” in popular usage. It shouldn’t be at all surprising that “crazy” is a word with gendered connotations.

And the tendency of men calling rational women “crazy” persists. At Columbia, our bros nod in knowing commiseration when we talk about our “crazy” ex-girlfriends or the “crazy chicks” we met in EC last weekend. Donald Trump calls female reporters “crazy” both to question the integrity of the free press and because he’s a raging misogynist. These are just examples of the age-old false dichotomy men have constructed in discourse: Men are rational, women are emotional, and, since emotion is the antithesis of logic, emoting too strongly is a sign of irrationality, insanity, or “craziness.”

One fact of the matter is there are so many funnier and more descriptive alternatives to this word that continuing to use it is unimaginative and unnecessary. These are all the alternatives I came up within two minutes: “Wack.” “Hate to see it.” “The worst.” “Yeet.” “Unbelievable.” “Incredible.” “I’m shook.” “Sometimes you just gotta send it.” “That’s actually terrible.” “I’ve never heard of such a thing.” “No way.” “You beefed it.” “Couldn’t be.” “That’s recockulous.” The list goes on and on.

“Crazy” can be a pretty useful word, sure. In some contexts, it can put two people on exactly the same wavelength about someone or something in a way that no other expression could. But we risk trivializing and othering mental illness when we ignore the subtext of this word. Despite our best intentions, overusing “crazy” can diminish the experiences of mental illness. And this is just about the last thing that would be useful in Columbia’s ongoing campaign to acknowledge and treat increasingly high rates of mental unwellness.

It’s unrealistic to expect the word “crazy” to fall out of our collective vocabulary anytime soon, but it’s also irresponsible to ignore the larger social stigmas associated with the way we use it. With so many alternatives available, it’s a noble effort to bypass this word when another would do. Not only do you get brownie points for acknowledging the gravity of real mental illnesses, you even have the opportunity to make up your own slang terms. Doesn’t get much better than that.

Austin Dean is a junior in Columbia College studying linguistics who appreciates your perseverance. Please send all your favorite turns of phrase to acd2179@columbia.edu. Can of Words ran alternate Tuesdays.