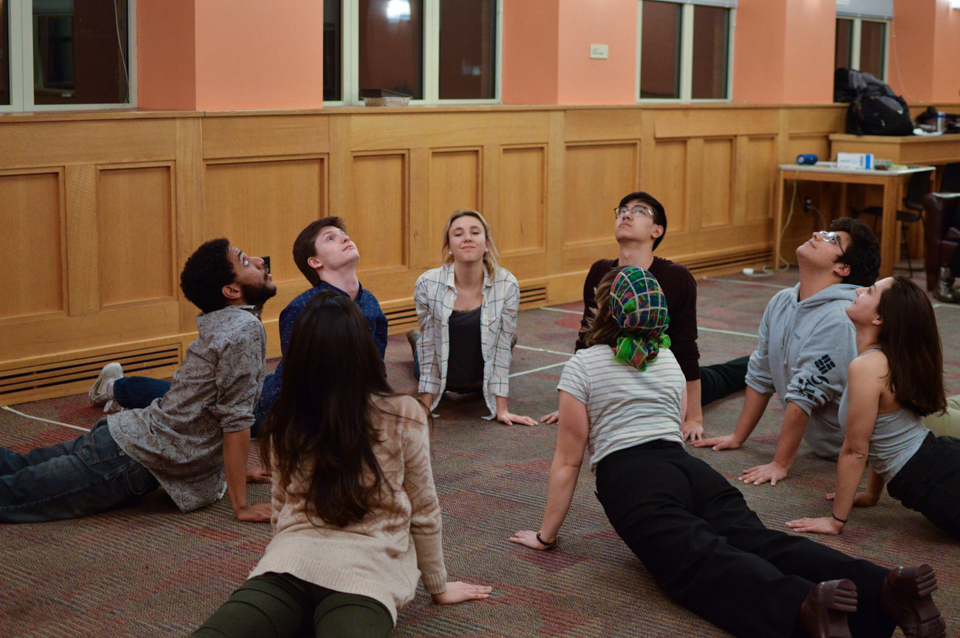 Inclusivity in art is an act of protest. It is a radical commitment to creating equitable spaces in a fundamentally inequitable world. To practice inclusivity is to recognize your areas of ignorance and work on them. It is to surround yourself with people who will point out where you can do better, and to empower them to do so. It is listening, it is humbling yourself, and it is using your platform to give others a platform.

For me as a director, one of the first steps to creating inclusive theater is recruitment. Diversity statements on audition/interview materials are common (i.e., “people of all identities are encouraged to audition”). This is great, but it is only a first step. It is also crucial to evaluate the environment in which you are recruiting and then be proactive in correcting for inequities.

When I directed Eurydice, it seemed apparent to me that people of color were vastly underrepresented in Columbia student theater. As a response, my team and I compiled a list of organizations of students of color on campus and reached out to ask whether they would be willing to share our audition/interview information. We were successful because we made it clear why our production needed voices of color.

I learned how to be open to feedback as well during this process. In order to truly build trust within diverse communities, you have to be willing to listen and learn. Early on in our advertising campaign for Eurydice, someone pointed out that our character descriptions were exclusive of gender-diverse folks (we listed each role as male or female) and so we revised our language to make it more accurate and more inclusive.

The work of building an inclusive environment does not stop at casting, though. I learned this lesson on the first play I directed, Ooh Kill ‘Em. The show dealt with many sensitive topics, including, most prominently, sexual assault. In hindsight, I was not prepared to deal with the challenges this presented for actors or the audience.

I did not include the whole cast in discussions or nurture a culture where everyone could feel comfortable challenging me. As a result, I did not present a carefully considered product to the audience as pertaining to sexual violence in the show. Ooh Kill ‘Em also lacked sufficient content warnings, compounding the problems.

Feedback from friends, fellow artists, and reviewers pushed me to take a hard look at my entire process for Ooh Kill ‘Em. When I was lucky enough to get the chance to direct again with Eurydice, I was determined to do better. It required consistent effort, and I still made mistakes along the way, but I believe I made considerable strides toward creating a safe, welcoming environment for my collaborators and audience.

First of all, I empowered my collaborators to challenge me. At our first meeting I called attention to the challenges I anticipated facing. I emphasized that while I was sure we could pull off the play collectively, my lived experience was insufficient to direct it without everyone’s active participation. Sarah Ruhl’s Eurydice is a feminist adaptation of the Orpheus myth which revolves around the challenges of growing up as a woman. Meanwhile, I was a cis male director leading a cast and team composed almost entirely of women. In order to build the reciprocal trust necessary to direct this production, I had to openly acknowledge this reality and then follow through by cultivating dialogue inside my rehearsal room. I solicited opinions often from my team, and I chose moments to let others lead. As a result, even when I made mistakes, I was surrounded by people who were comfortable enough to correct me.

For instance, only a couple days before the show opened, I got into an argument with the associate director about a recent direction I had given to an actor which drastically changed a scene. She felt my direction was antithetical to the character and laid out her reasons. At first, I disagreed, but because we had developed the trust to openly express our disagreement with each other, she eventually convinced me. As a result, she reworked the scene herself, and the final product was better for it.

I attempted to create a culture of collective creation on Eurydice. This also affected the way we handled sensitive material. Eurydice, like Ooh Kill ‘Em, dealt with sexual assault, but this time I made sure we spent enough time discussing its role in the show at the very beginning and that the entire cast could participate and contribute to the production’s approach.

We also focused heavily on establishing guidelines surrounding consent. We held a workshop on consent in theater, led by a program coordinator with Being Barnard. Eventually we established a rule that before running any scene involving physical contact—sexual or otherwise—actors would check in with each other on what they were comfortable with that day. This had an incredible effect on the sense of comfort and respect in the rehearsal room.

Meanwhile, for the audience’s safety and comfort, we displayed content warnings on every piece of promotional material and public statement that was done for Eurydice.

I still mess up, and there is so much I’m still clueless about. But I try to listen and learn and grow. Because I believe that is the first step to creating inclusive art. And I believe that creating art that is inclusive–that empowers collaborators and engages audiences often overlooked—is a powerful way to work toward a more equitable world.

The author is a director and recent alumnus of Columbia College. Directing credits at Columbia include Ooh Kill ‘Em and Eurydice. He also served on the boards of CU Players and King’s Crown Shakespeare Troupe.