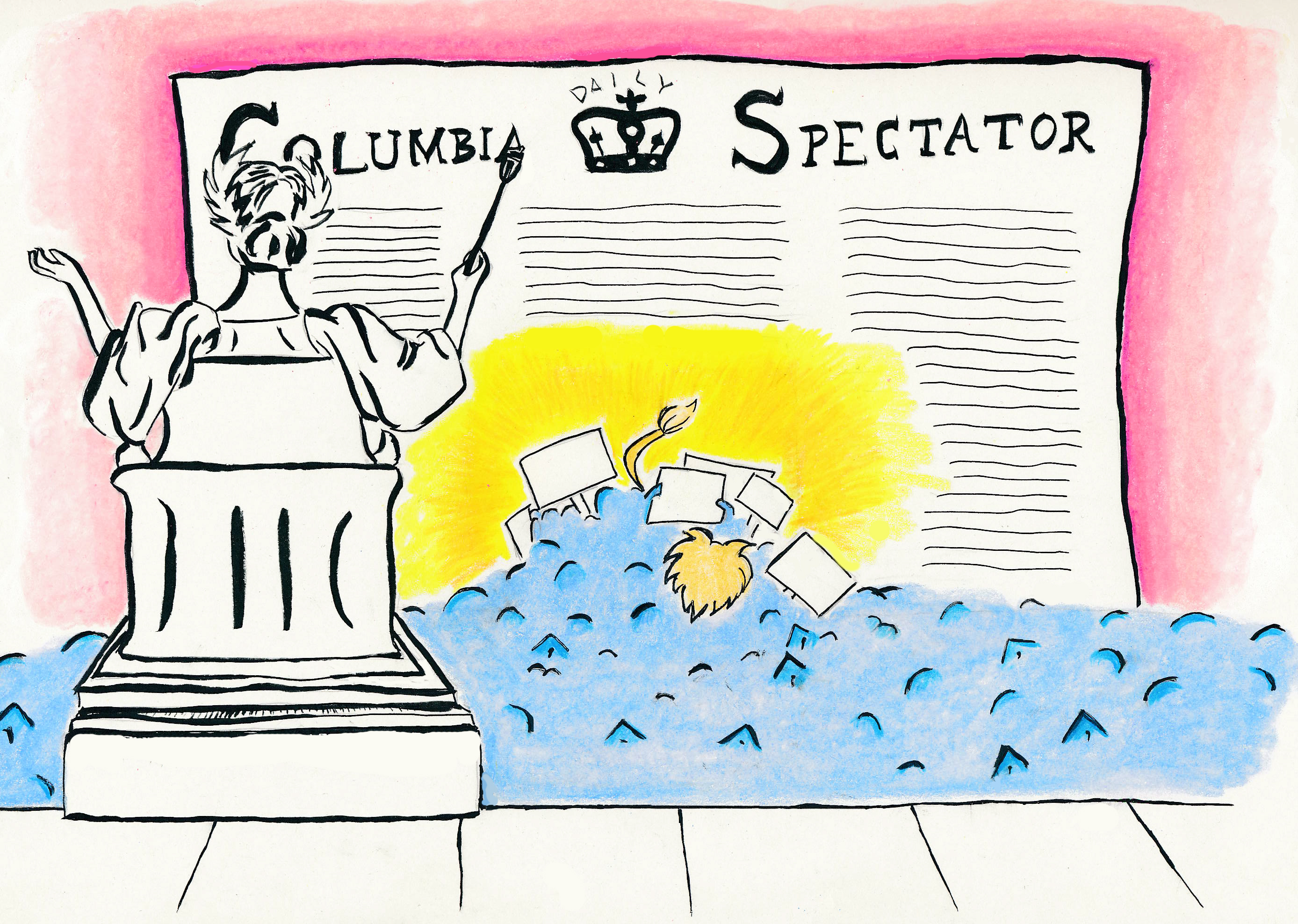 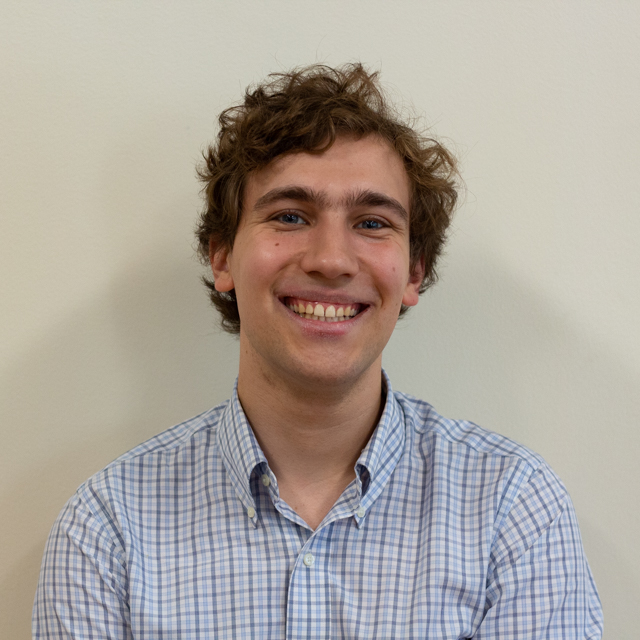 Max F. Neuman is a senior in Columbia College, majoring in political science because his parents let him stay up late in 2004 to watch the Bush-Kerry debates. He is a native Brooklynite who formerly studied at CUNY Brooklyn College before transferring to Columbia and has never spent more than 30 consecutive days outside of New York City. Max has been involved in debate as a competitor and teacher for eight years, for which he travels so much that he still hasn’t learned what Columbia students do on Friday nights. He contributes to Discourse and Debate with Blythe Edwards and Nathan Santos. 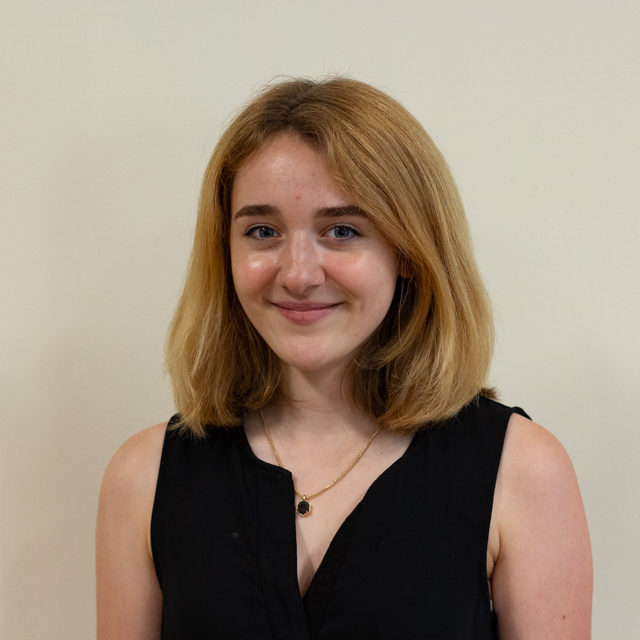 Blythe Edwards is a political science major in the School of General Studies. She landed on Columbia’s campus this autumn after spending the first two years of the dual B.A. program at Sciences Po in France, where she studied alongside a legion of future French presidential hopefuls and enjoyed daily baguettes. A proud Londoner with an unfortunate American accent, Blythe has further muddled her identity by half a dozen formative years spent in Dubai, Paris, and Hong Kong. When she is not hunkered down at Butler, you will find her exploring the city by foot and listening to audiobooks and podcasts at double speed. She doesn’t shy away from holding minority positions, so feel free to email her at blythe.edwards@columbia.edu or message her on Facebook if you want to discuss anything further over a mug of her stockpiled Cadbury Hot Chocolate. She contributes to Discourse and Debate with Max F. Neuman and Nathan Santos. 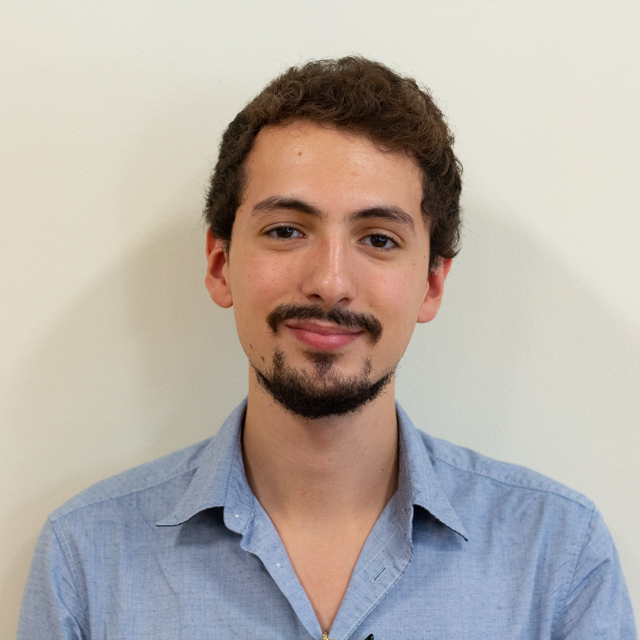 Nathan Santos is a senior at Columbia College studying Latin American studies and history. A baroque music aficionado, he will defend the relevancy of Jean-Philippe Rameau and his outrageous libretto plots to the end of the world and back. Given his eclectic involvement in clubs on campus ranging from Mexican folk ballet to critical theory publications, he is inspired to one day become either a farmer, conductor, or the president of Brazil—maybe all three, who knows? He contributes to Discourse and Debate with Blythe Edwards and Max F. Neuman. 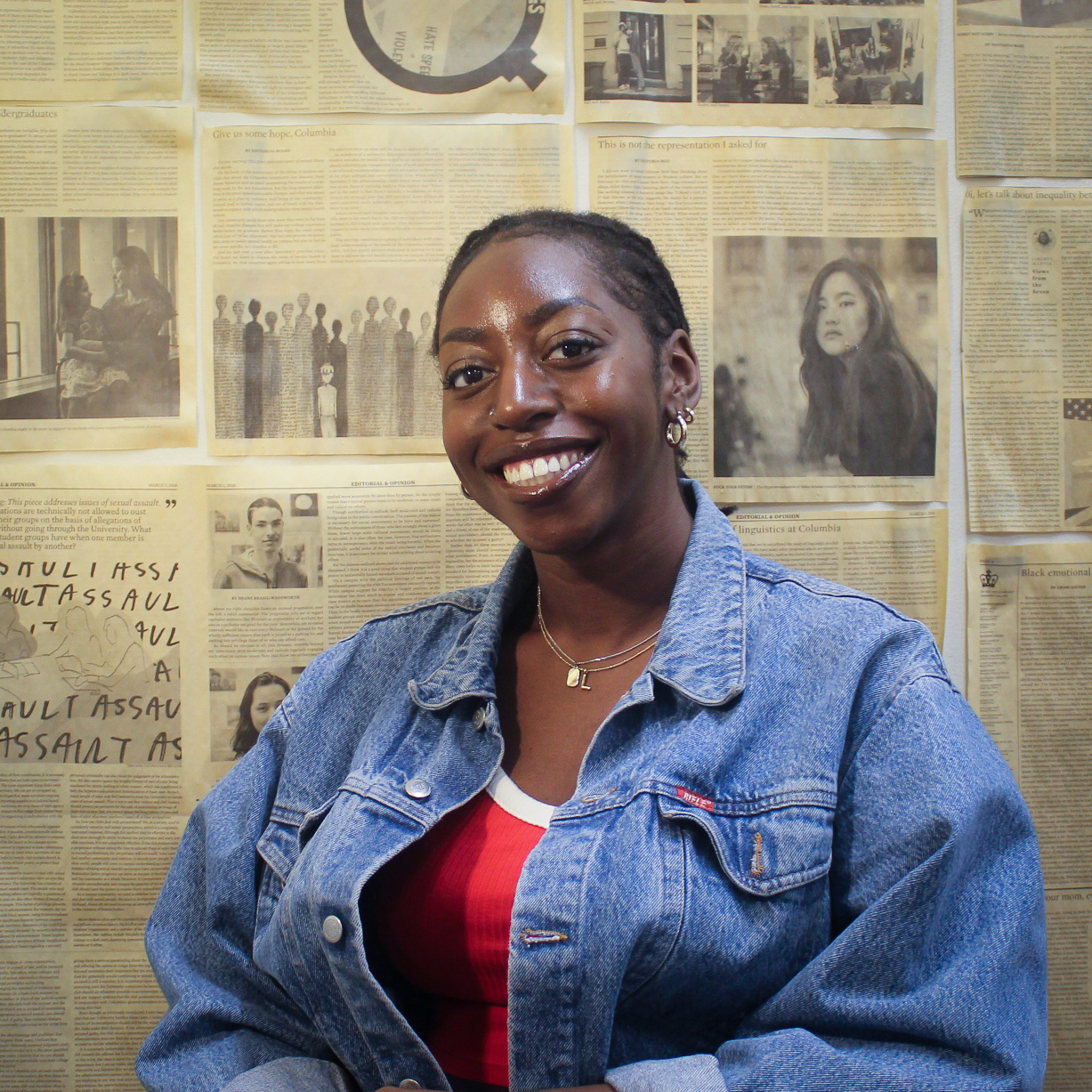 Liberty Martin has returned to her column with more opinions and longer dreadlocks (although you can’t see it in her headshot). She is a junior in CC majoring in comparative literature with a focus on the Caribbean and is an international student from Thornton Heath, South London. As she is a proud Londoner, her column name is a reference to Thornton Heath’s zip code district, CR7. Martin is an aspiring writer and is becoming more and more passionate about Black Britain and the Caribbean, so she’s considering working in the cultural sector once she graduates (but honestly, who knows?). Outside of writing and studying, you can find her crying about Frank Ocean, singing loudly to herself, or embarrassing herself on Twitter, which you can follow @libertytaking. Her column, Views from the Seven, runs alternate Sundays. 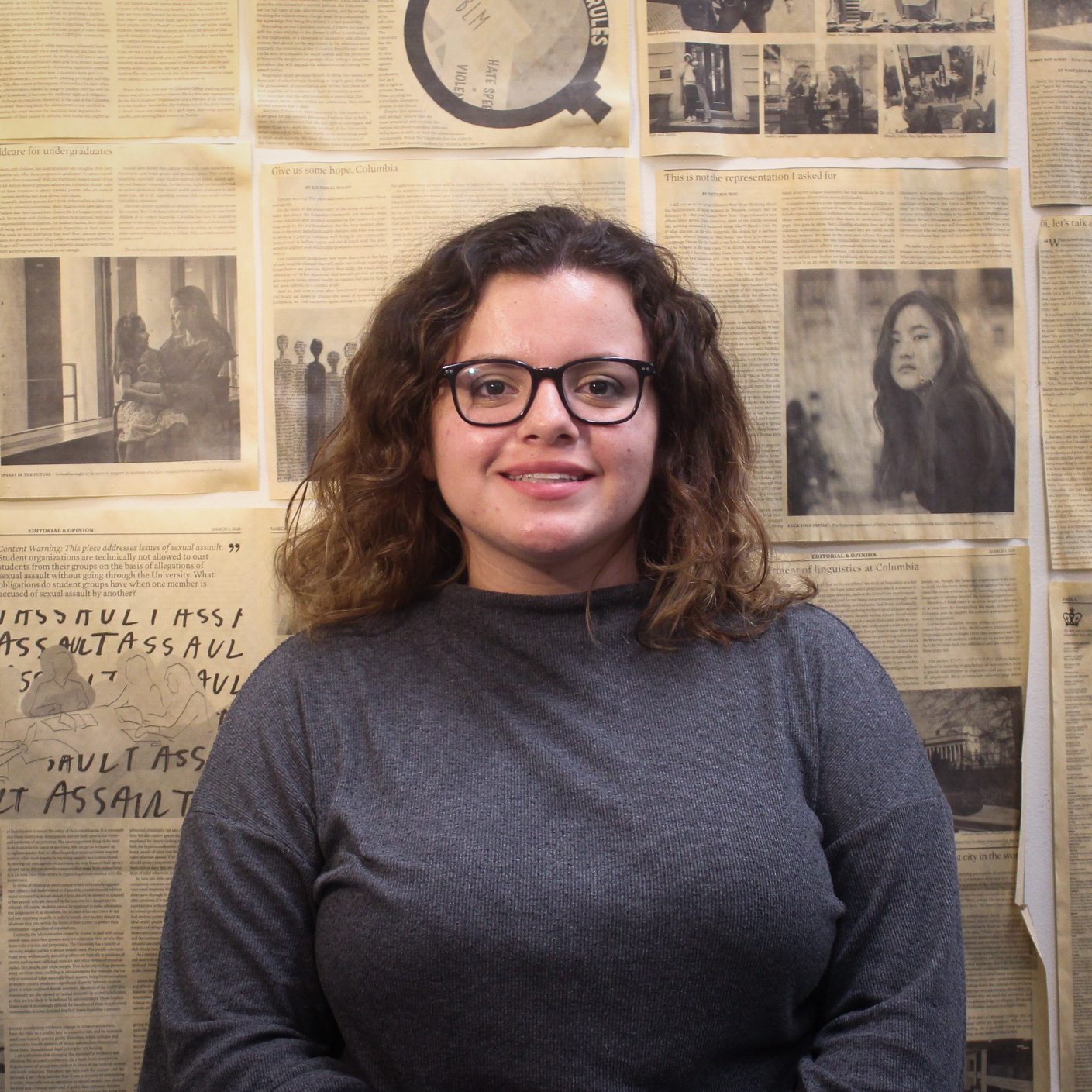 Milagro Chavez-Cisneros is a junior in Columbia College majoring in Hispanic studies and concentrating in ethnicity and race studies with a specialization in Latinx studies. Whenever she isn’t on #CentralAmericanTwitter or in a meeting, you can find her in Lenfest Cafe or at karaoke nights at Casa Latina. She loves to talk about the newest Spanish-language Netflix shows and fully embraces her double Pisces energy by listening to old cumbias. If you ever feel you’re lacking in #CentAm content, follow her on twitter @milaccisneros or email her at mc4412@columbia.edu. E-Spec-taculo runs alternate Mondays. 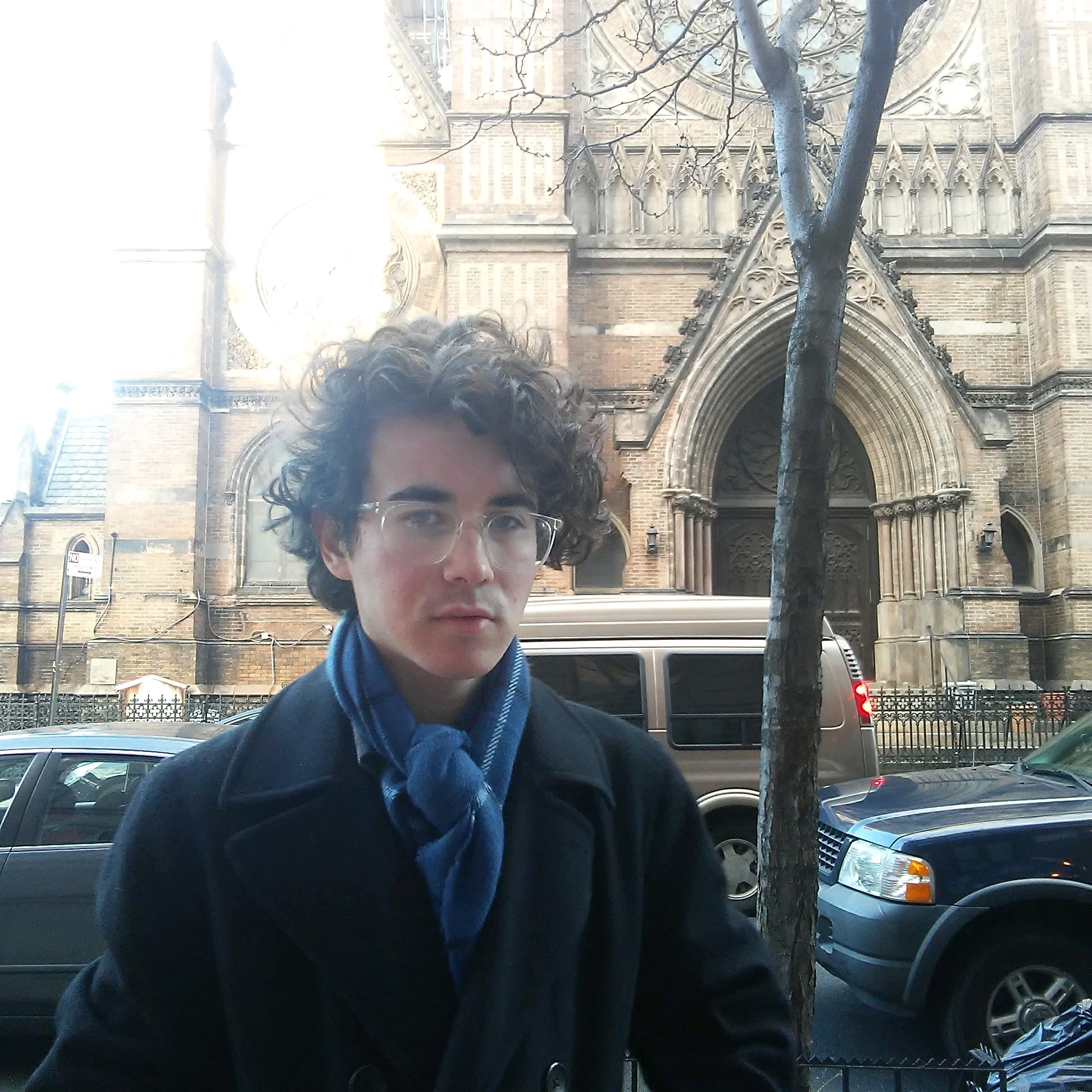 Sam Wilcox is a senior in Columbia College studying English and anthropology. He is uniquely terrified of too many things: oblique angles, hungry squirrels, and over-eagerness. Terror, as a sensation, is one of his favorite activities; terror, as a descriptor, is another word to tag him. You can find him cowering behind desks, windows, and library stacks, or asleep and experiencing visceral nightmares. His column, Functioning Incorrectly, runs alternate Mondays. 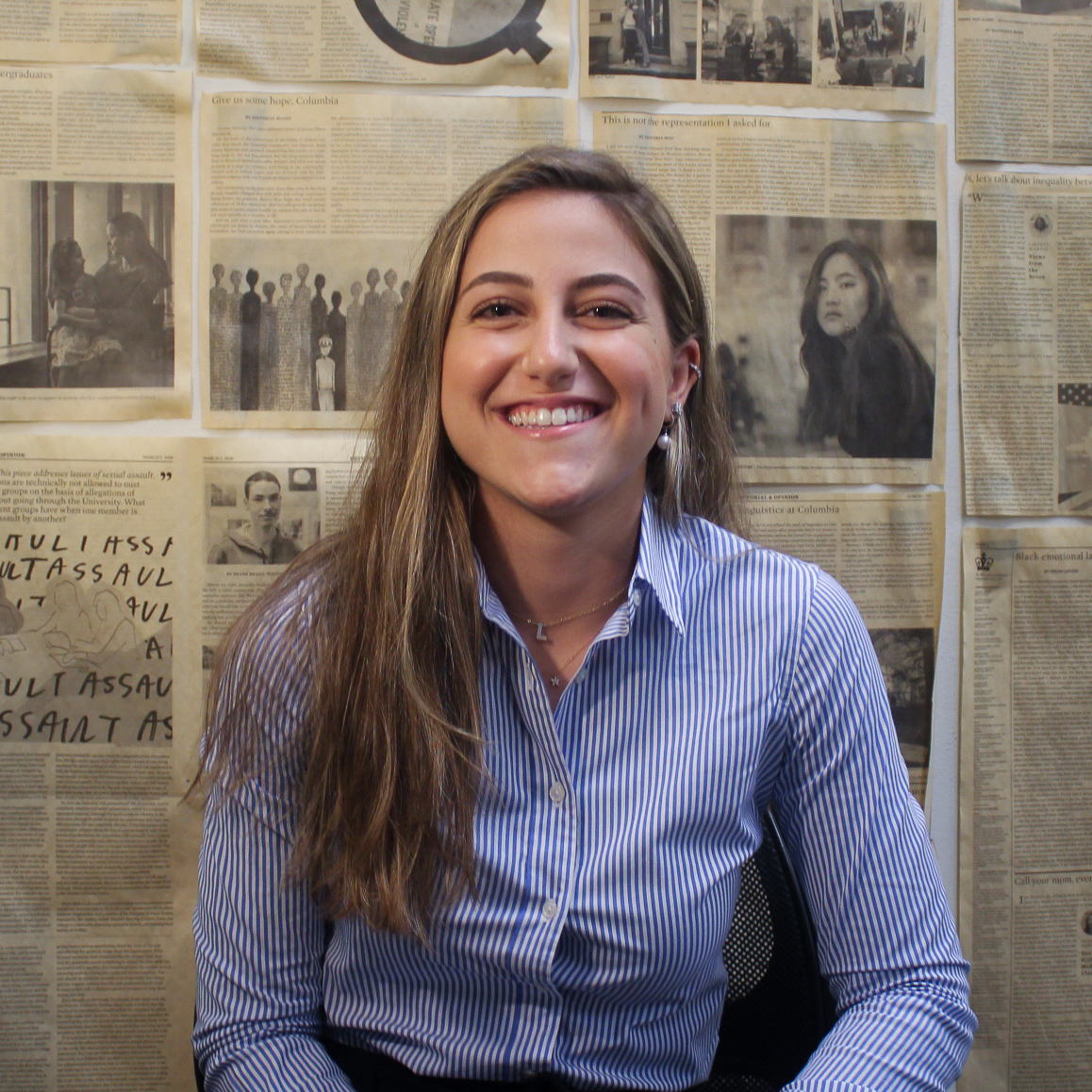 Lana Awadallah is a junior in SEAS majoring in applied mathematics and minoring in economics. Please do not inquire as to what she intends to apply her math to in the future, as it will only serve to induce anxiety. In the fourth grade, she wrote, produced, directed, and starred in her talk-show, Sukkar w Shai, all on her pink VAIO’s webcam. This column serves as the long-awaited and much-requested sequel to her hit show. You can send her comments, feedback, or hate mail at lna2116@columbia.edu. Here’s the Shai runs alternate Mondays. 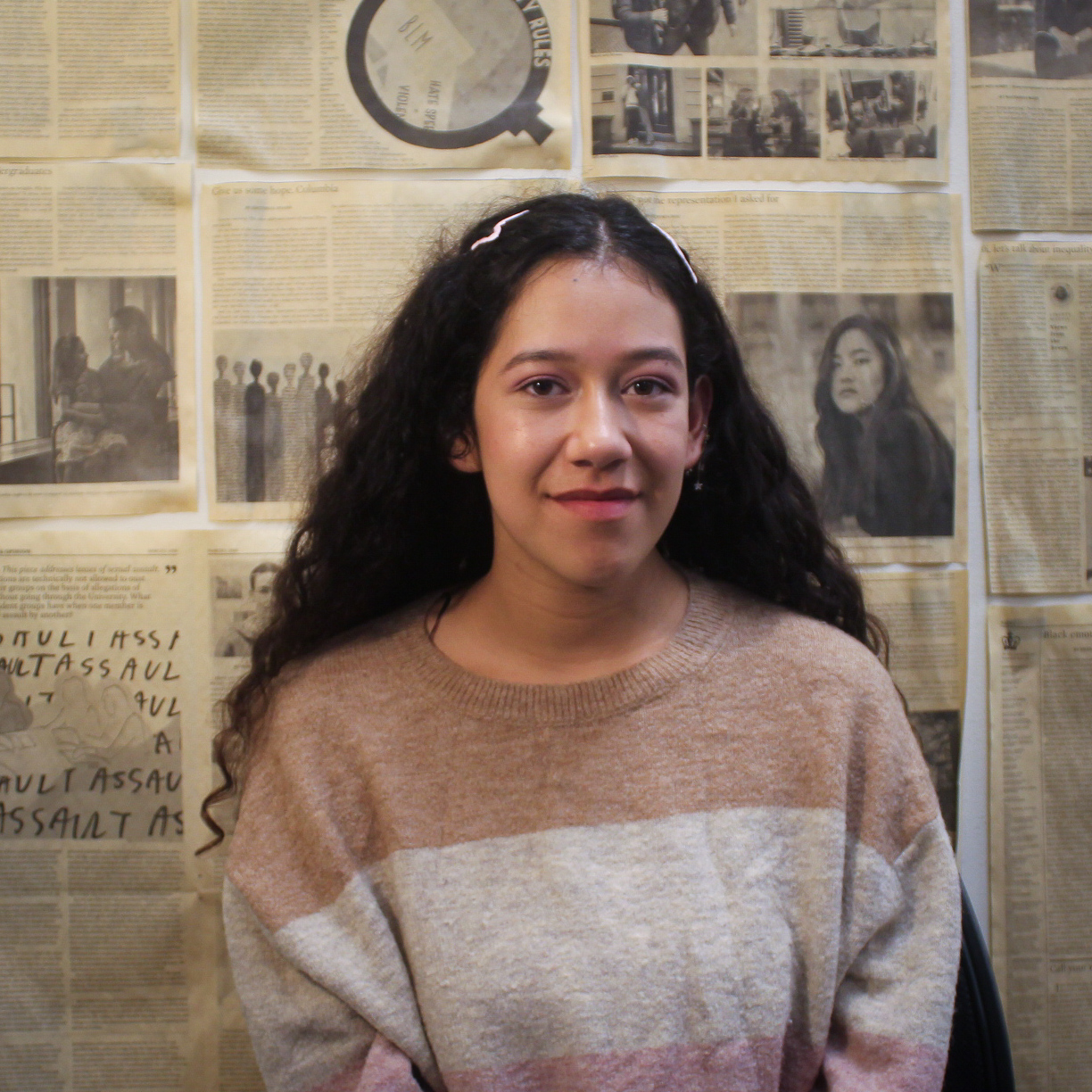 Daphnie Ordoñez is a junior at Barnard College who is unsure of what she wants to do in life, but is studying political science. She’s from Los Angeles, but you won’t ever have to ask because you’ll definitely see her sporting her flip-flops around the city... shamelessly. She loves iced chai lattes, Robyn Rihanna Fenty, and some good memes, but passionately hates the Hamilton elevator and the 1 train. She can be reached at dzo2101@barnard.edu. Found in Translation runs alternate Mondays. 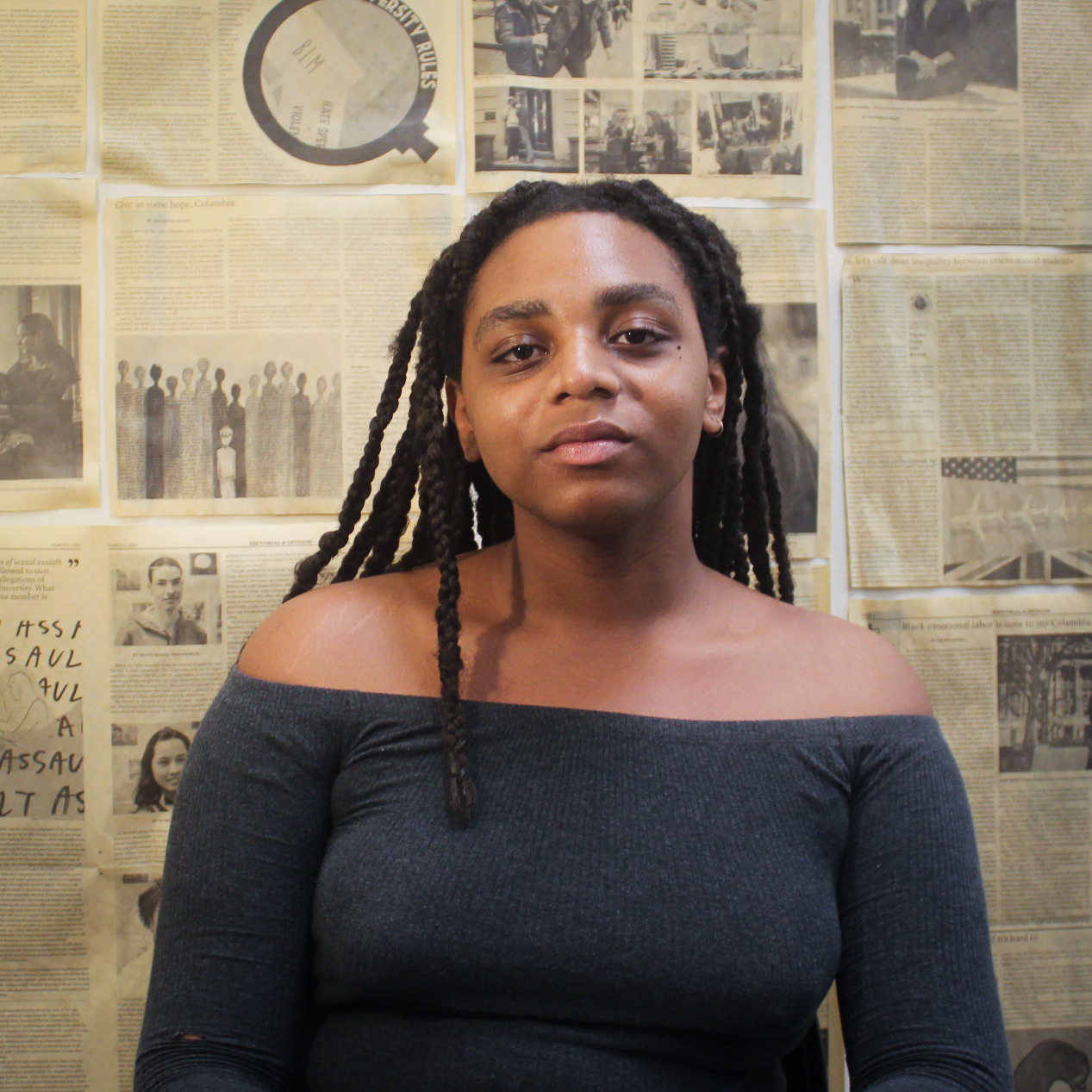 Sabina Jones is a senior in CC studying English and comparative literature, along with Hispanic studies. She’s ready to graduate and disappear into the ether. She keeps a real mother in Georgia and a “mama postiza” in Havana—kind of like the movie Annabelle, except less scary. She likes babies, books, and consistent CPS appointments. Her column, Transatlantic Trade, comes out alternate Wednesdays. 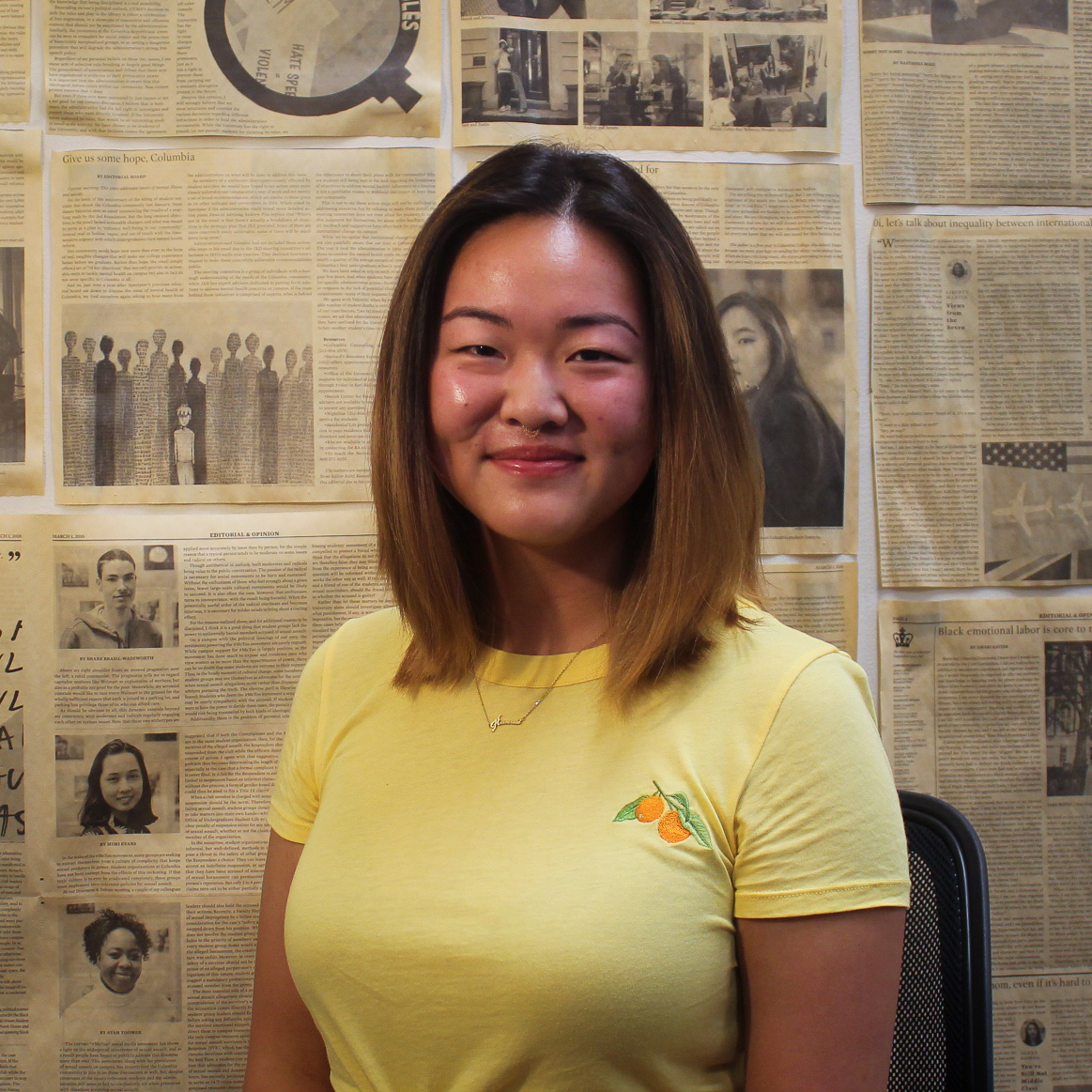 Kalena Chiu is a senior at Barnard, majoring in English and concentrating in creative writing. Born and raised on O’ahu, Hawai’i, she spent her freshman year in Fort Worth, Texas, before yeeting the fuck out of there and moving to New York City (if Taylor Swift can do it, so can she!). She is a first-and-a-half-generation immigrant with a lot of feelings (her Virgo sun is constantly trying to get her Leo stellium in line). On campus, she is the editor-in-chief of The Barnard Bulletin, senior advisor to Mālama Hawai’i, and a member of Alpha Omicron Pi. In her free time, you’ll find her napping in a sunbeam or pole dancing at her favorite studio down in Chelsea! Catch her on Insta @kalenachiu for beach pics, pole vids, and Sulz Tower views. Please Remove Your Shoes runs alternate Wednesdays. 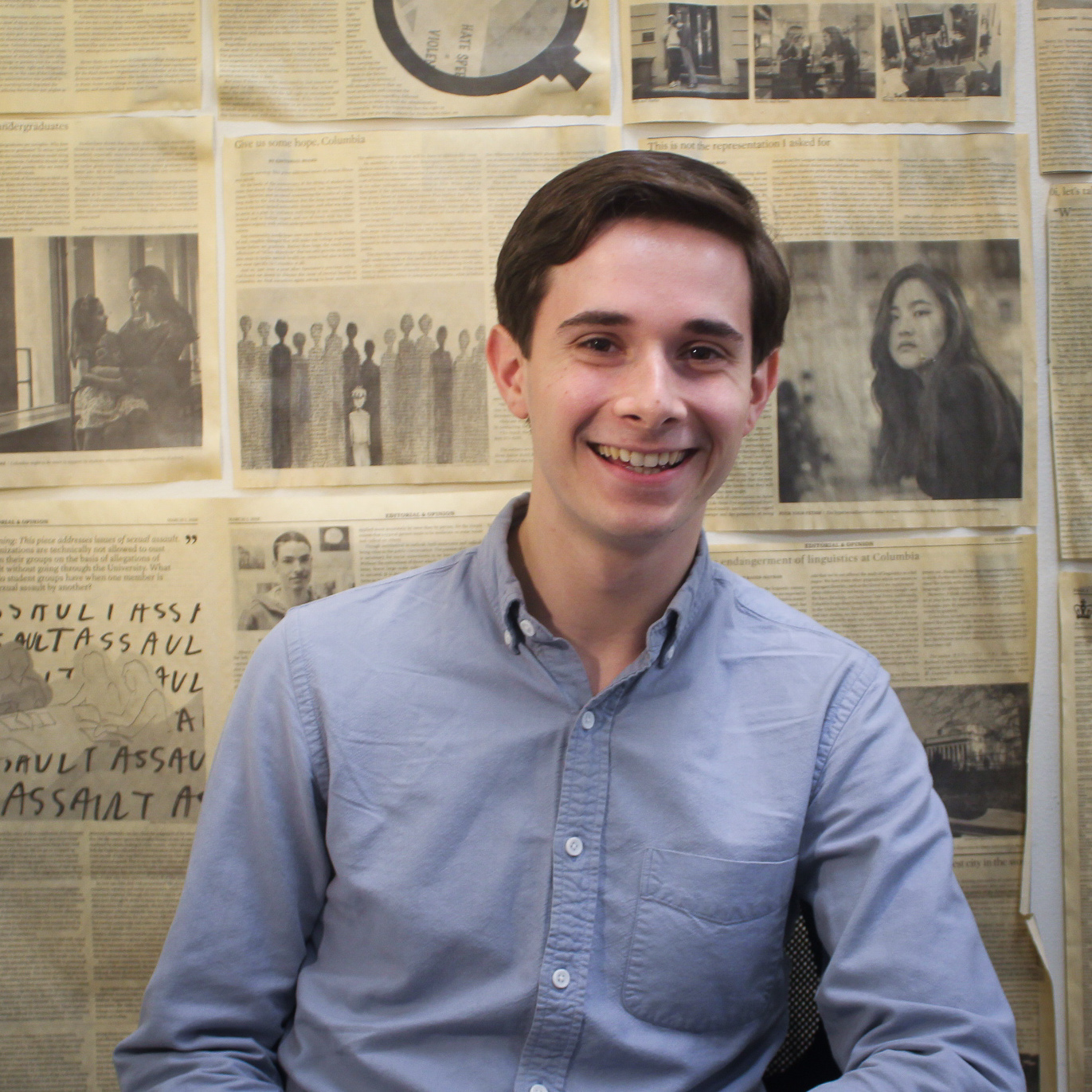 Jacob Kaplan is a senior in Columbia College studying history. He performs with the Columbia Kingsmen, Third Wheel Improv, and wrote last year’s Varsity Show. If you didn’t see it, don’t worry—he is happy to give you a full retelling. He is new to Twitter and needs more followers, so check out @JacobKaplan17. He also likes getting emails, so hit up jsk2231@columbia.edu. The Small Pond runs alternate Wednesdays. 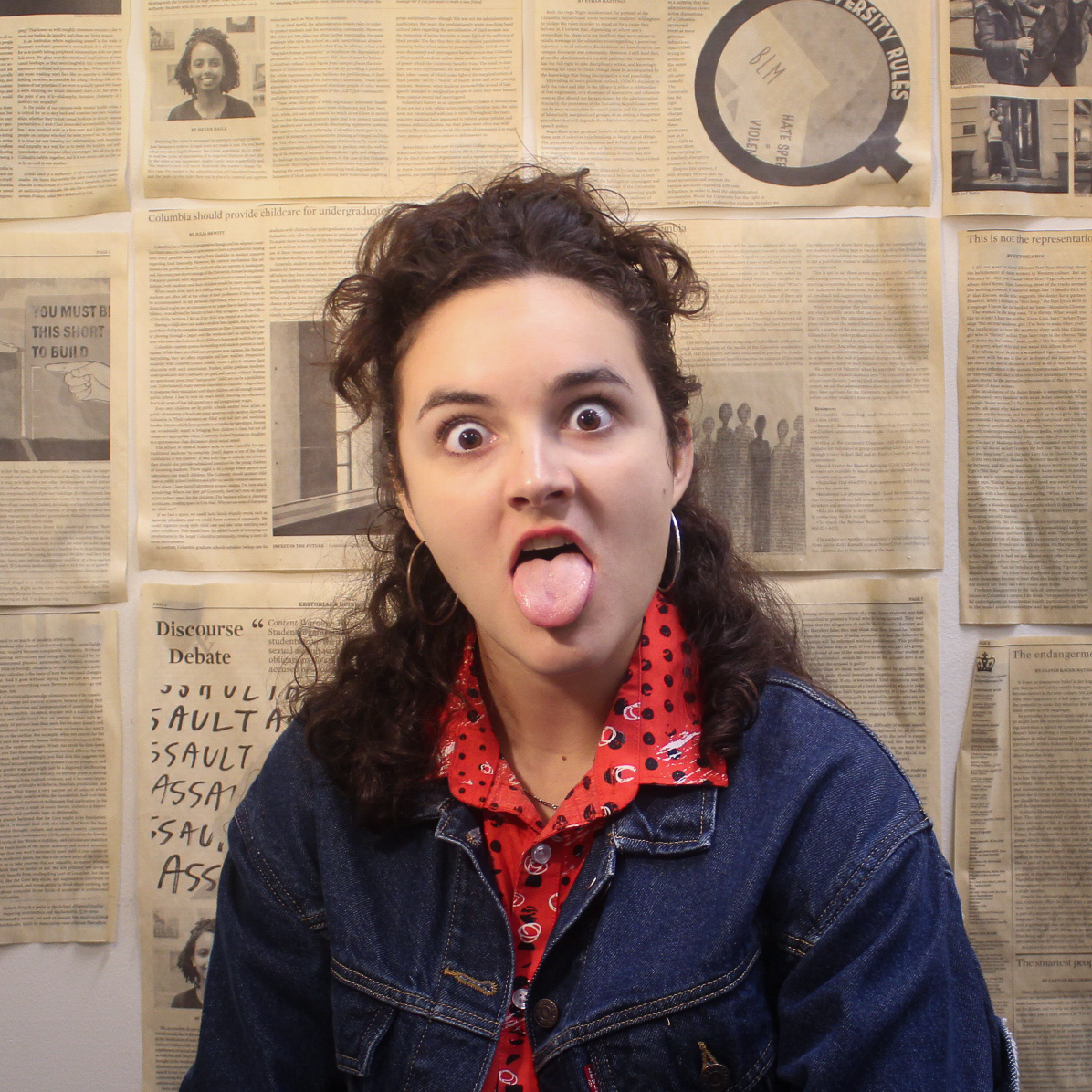 Emma Gometz is a pile of pulsating goop and also a junior in Columbia College studying evolutionary biology of the human species. Why do we love? It may have something to do with our pelvic structure. Emma is often working with Columbia’s theatre groups, drawing comics, and making purses out of soup cans. Catch her imitating Maria Bamford while walking to class, struggling to speak Spanish to her grandparents on the phone, or obsessing over what she just said. Emma also cares a lot about what she puts in her body, yet idolizes Divine for eating dogshit on camera. There’s probably something Freudian there. She is from Queens and coming for you next. Food, Fear, and Filth runs on alternate Thursdays. 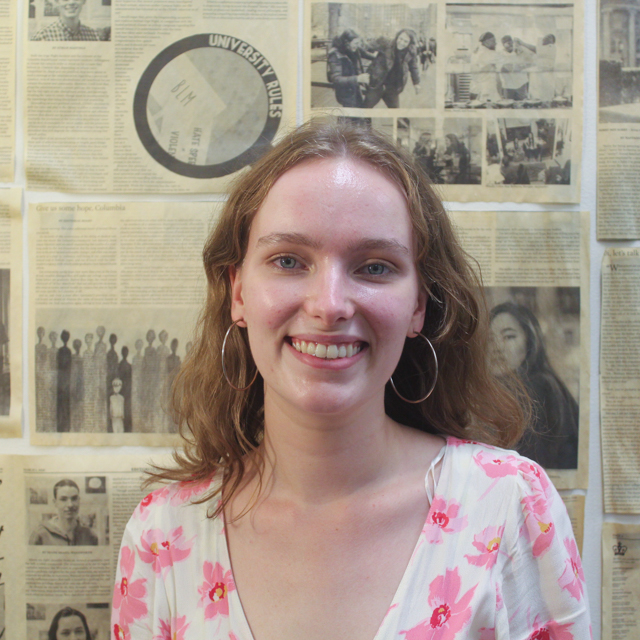 Venice Ohleyer is a junior in Columbia College, majoring in creative writing from Brooklyn, New York. You may have seen her performing comedy on campus with Fruit Paunch Improv, CUSS*, or Memento Mori, as well as playing one half of the NSOP couple (and the cow) in last year’s Varsity Show. You also may have seen her because of her really, really sparkly rainbow backpack. Although she recently grew out her bangs, she is still often mistaken for a vegetarian. After graduation, she hopes to pursue comedy writing. The Invisible Hand is a satire column that runs every ten days. 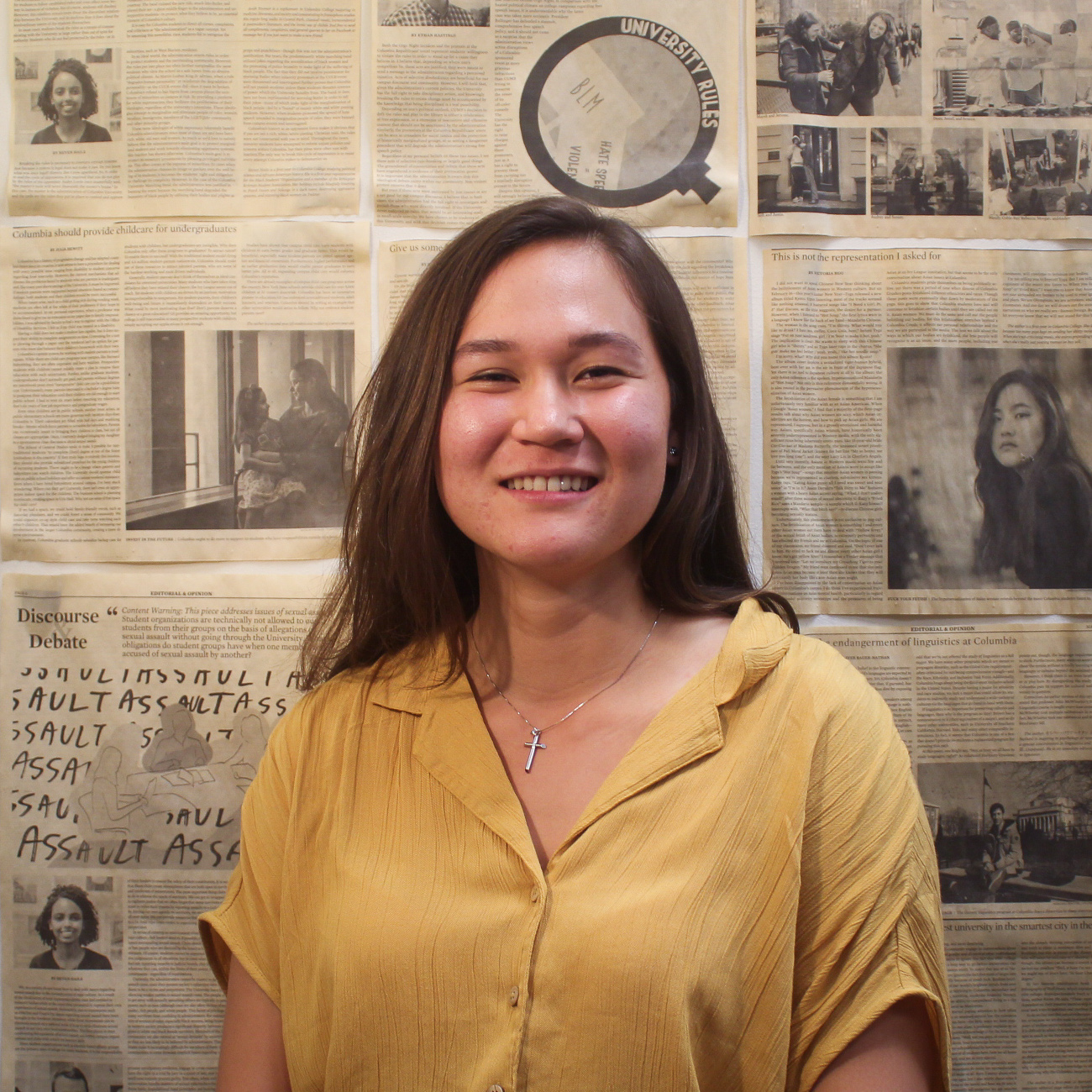 Sabina Maurer is a senior in Columbia College, majoring in biology and concentrating in psychology. She loves chemistry, Philadelphia, and Bon Appétit Magazine. She is also a former emo kid and a not-so-secret Taylor Swift lover––she’ll sing through “Infinity on High” and “Fearless” in her room with her guitar. Closest to her heart, Sabina is a four-year member of Columbia Women’s Rowing. Her column is The Art of Unset and it runs alternate Fridays. 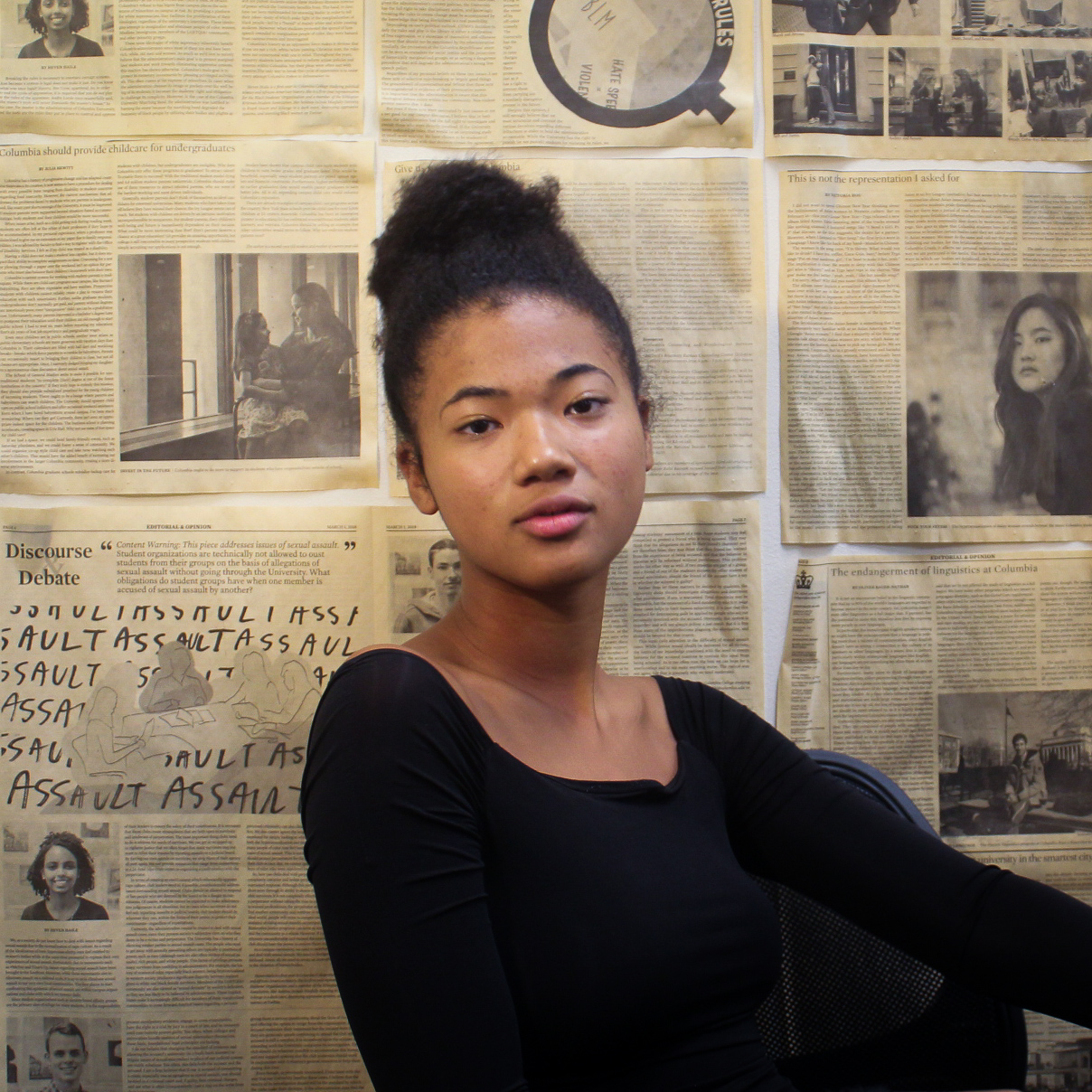 Yasna Vismale is an artist, advocate, and avid networker. Her passion to build authentic and meaningful relationships with the people around her came from wanting to understand the paradox of her biracial identity as a low-income student in a high-income environment. She is a sophomore in Columbia College majoring in… who knows? At Columbia, she is the Alumni Affairs Representative of Columbia College Student Council, conducting independent research within the energy sector, and in the Model United Nations travel team, and also loves playing her trumpet and modeling. Her column, Getting Coffee with Yasna, runs alternate Fridays.