It’s time to re-evaluate our institutional values, starting with 8 names

It’s time to re-evaluate our institutional values, starting with 8 names 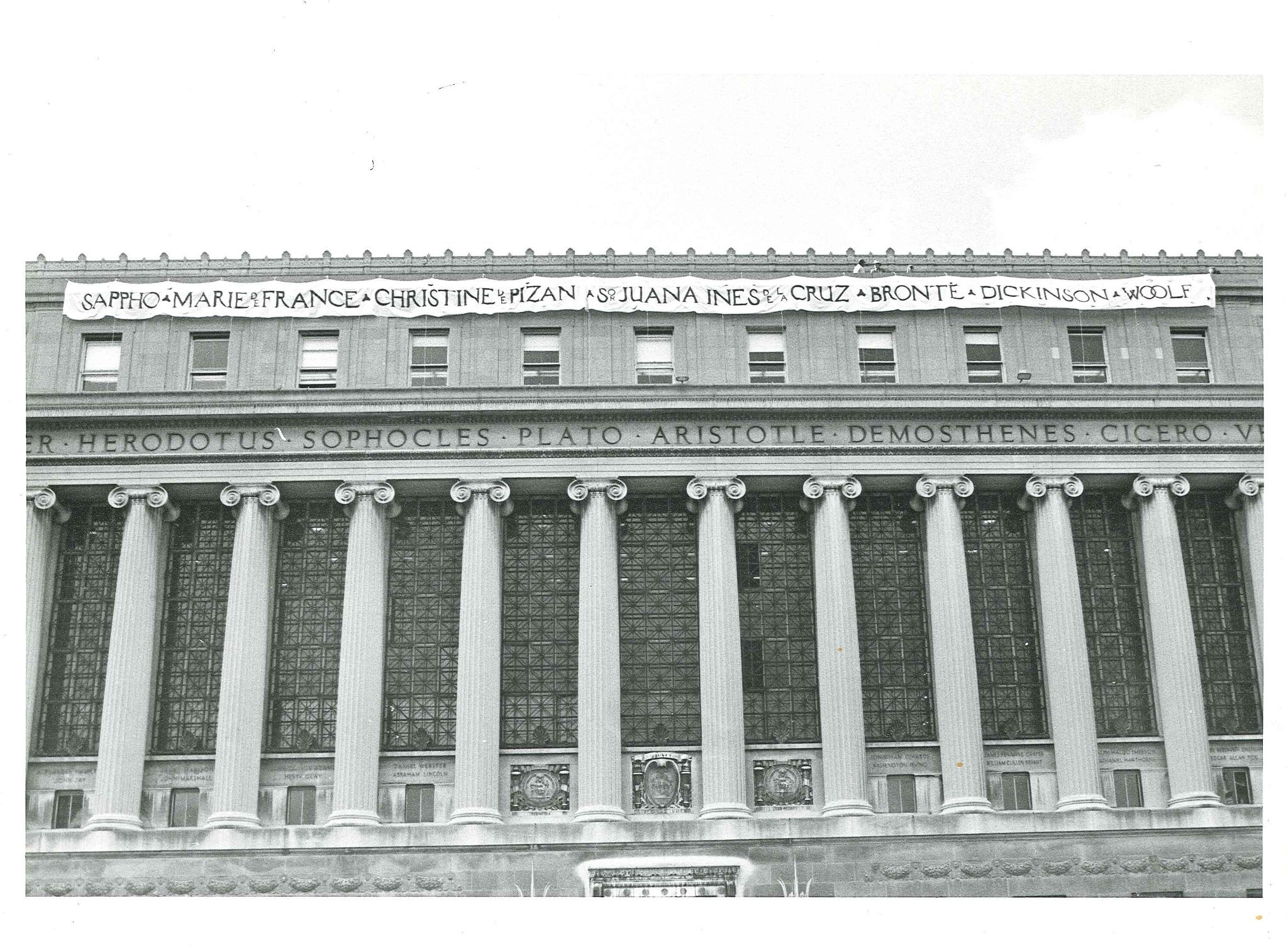 Thirty years ago, Laura Hotchkiss Brown, GS ’89, worked with other Columbia students to make a banner by hand that had the names of seven female writers which they hung from the top of Butler Library. Five years later, another group of students hung a similar banner. Next week, a third iteration of the banner will be draped across the facade of Butler with the following names: Maya Angelou, Gloria E. Anzaldúa, Diana Chang, Zora Neale Hurston, Toni Morrison, A. Revathi, Ntozake Shange, and Leslie Mormon Silko.

On December 9, 2018, underneath the names of Homer, Herodotus, Sophocles, Plato, Aristotle, Demosthenes, Cicero, and Vergil, Julian von Abele, CC ’21, yelled at a group of Black students, screaming, “White people are the best thing that happened to the world” and that “[white people] built modern civilization.”

Four months later, across the street, a student was pinned against the counter by Public Safety officers in Milstein Library for not showing his identification when he entered Barnard’s campus—a school that receives its name from a slave-owning family. These libraries are more than just buildings, and the names etched onto their façades are more than just tributes to wealthy donors. They are constant yet subtle reminders of the values of their respective institutions. Every time someone walks past Butler, they see the names of eight white men and internalize that these are the writers and thinkers that Columbia deems deserving of cultural admiration.

This high institutional pedestal is further reinforced by the Core Curriculum. Seven of those eight men on the front of the library have been featured in either Literature Humanities, Contemporary Civilization, or both. Columbia hasn’t just put their names on a building; the institution has put their ideologies into every classroom on campus.

As made explicit by the mission statements of these courses, we read literature to understand the human experience. When students read The Iliad during the first week of Lit Hum, they discuss the themes of hospitality, honor, war, and filial piety. But these themes only help us to understand the Greco-European tradition. Left unchecked, this one-dimensional analysis of tradition can lead to the adoption of harmful Western motifs. When do we unpack sexuality? The loss of a child? Mental health? The intersectionality between being queer and a person of color? What it means to be a cultural minority?

When do we talk about human experiences that go beyond the discussions based on texts written by ancient European white men?

When the Core was first created, the writers that were put in the syllabi directly reflected the demographics of the student body: white men. But in the past 100 years, Columbia’s demographics have changed dramatically. Over 50 percent of Columbia’s undergraduates identify as students of color. These statistics are not represented in our “canon,” as defined by the façade created by Butler and by our curriculum.

Over and over again, students hear the word “canon” mentioned by their professors and their peers. But what does this word mean? What is a canon and why do we need it? In many ways, the use of the word canon is just one example of intellectual laziness—a way for people to justify decisions made over a century ago, the true rationale for which has been lost to time. For far too long Columbia has refrained from changing their syllabi with the justification that the selected texts are “classics,” “masterpieces,” etc.

It’s been 100 years since the Core Curriculum was introduced and 30 years since the first student group came together to protest Butler and Columbia’s elevation of white men. The examination and reconfiguration of our institutional values are long overdue.

The Butler Banner Project seeks to shed light on the lack of representation given to so many identities and themes in the contemporary canon. The project invites students to question the values of Columbia as an institution and much of Western society. On October 1, a banner with the names of eight female writers will be hung directly above the male names inscribed on Butler’s facade. The banner will hang for the duration of the fall semester and under it, the group will host a series of events, including a speaker series, a book club, a Wikipedia edit-a-thon with the executive director of Wikimedia, a zine-making workshop, and so much more.