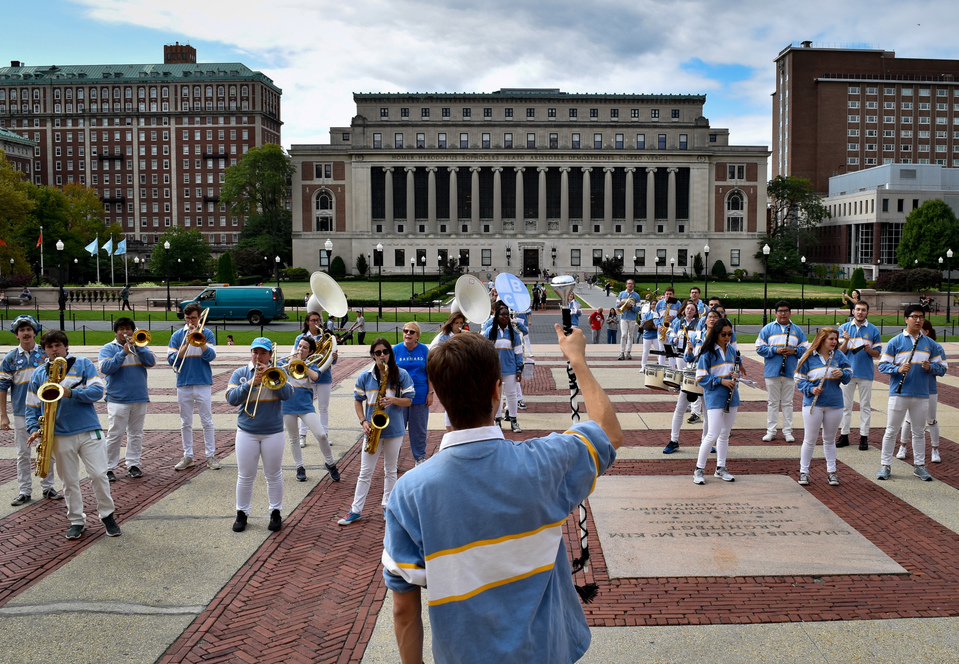 I am a proud alumna and name-dropper of Columbia University and its marching band, and I won't be sending my kids to this school. Not only because they have yet to exist, or because there's no way I'll be able to afford to, but because, in my opinion, this University so flagrantly doesn't care about its students.

The athletics department has decided to ban the Columbia University Marching Band from events, denying the band its ostensible reason for existing. They callously let the band members know just three days before the home opener—after both recruitment and rehearsal.

Cutting the band’s funding and prohibiting its presence at games means abolishing one of the only things on campus that is fun for fun's sake (with all due respect to Big Sub). Without CUMB, who would know what “Roar Lion Roar” even sounds like? Who would fill the stands at football games? Most importantly, how would anxiety-ridden nerds like me make friends?

Columbia is a difficult social scene to navigate—it’s hard to find a place to belong. Most student groups either require auditions or applications, and it’s exhausting having to “pledge” or “rush” in order to make friends. The marching band accepts everybody; there are no auditions, and you can hear it when they play. While tough on the ears, it’s good for the soul to know that a group of upperclassmen doesn’t have to adjudicate your hotness and alumni network potential in order to be a part of something fun and rewarding.

The Columbia football team would be the first people to tell you that Columbia football isn’t really about the game. It’s about community, Lion pride (no pun intended), and free T-shirts. Without a spirit band, the whole charade is even more distant from students than the 100 blocks it takes to get to Baker Field.

As much as the Columbia band is uniquely Columbian, it is also part of a network of bands throughout the Ivy League. The other Ivy schools perform halftime shows at their home and away games, attempting to also be clever. Who is Columbia going to send to the annual Ivy Bands conference, the kids from Staten Island Technical High School? I recently got a call from the Alumni Association where they suggested that it doesn't matter how much I donate—a greater quantity of alumni donations just help Columbia in the U.S. News and World Report Best Colleges rankings. If you want to compete with the other corporate pipelines known as colleges, why would you get rid of your scramble band, one of the few Ivy League traditions that isn’t accepting bribes in exchange for admission?

Here’s the part where I discuss Orgo Night. It’s been a tradition for over 40 years. Yes, there have been some bad jokes over the decades, but the band is always listening to the community, because it consists of the community itself. Scriptwriting meetings are open, and everybody in the band is welcome to pitch jokes and/or voice their concerns. Orgo Night’s student-written nature means that it is very much a product of the times and the comedy the kids grew up on. Today’s scripts read like expanded buy sell memes with musical interludes, and I mean that as a compliment. Students in 2019 should not have to pay for the sins of the ’80s Andrew Dice Clay wannabes.

Compared to other colleges, Columbia has an extremely weak comedy scene. Orgo Night is the highest-profile free comedy event of the year, and the closest thing that Columbia has to a late-night show.

Four years out of college, I have yet to outgrow my desire to write and perform jokes, and every time I submit a packet to write for one of TV’s many Jimmys, I think back to my years writing jokes based on Spectator headlines. The best nights of my college experience were the all-nighters spent working on the script, and I’ve been chasing that writers’ room camaraderie since graduating. The band is what gave me the confidence to become a comedian and writer, and the whole institution should not be punished for that.

If the administration cared about its students, and about the identity of the University, then it will let the band be the band.

The author, GS/JTS ’15, was minister of propaganda for the Columbia University Marching Band 2013-2014 and deputy Spectrum editor in spring 2015.