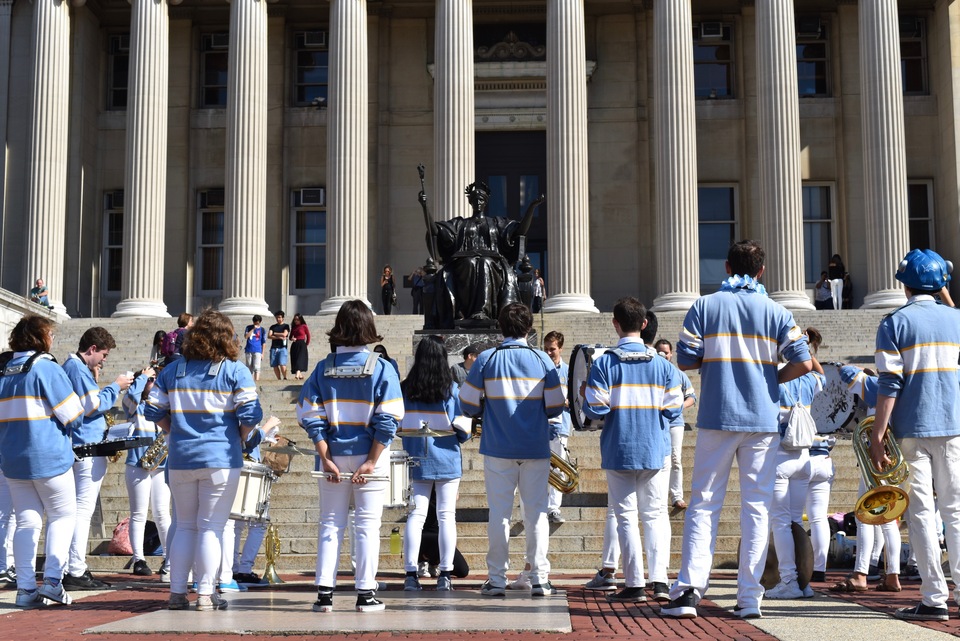 Three days before the home opener of the 2019 football season, the Columbia University Marching Band was informed in no uncertain terms that we would be barred from playing this season, despite having spent our summer preparing for our season and recruiting a new class of eager bandies. Yes, we missed a deadline to file for recognition, but we’re working to rectify that mistake. And at the end of the day, this is about more than bureaucratic red tape.

You may think we deserve banning due to the band’s history of racist, misogynistic, and otherwise offensive jokes. Three years ago, I’d have agreed with you. As a student coming to Columbia who had participated in marching band for six years, I did exhaustive research about the CUMB after I was admitted and it didn’t seem like the band would want me, a queer Latinx woman looking to explore those identities in college.

Still, a fellow high school band geek I met during NSOP convinced me to give the first rehearsal a try. Somehow, I—a friendless first-year—ended up laughing alongside upperclassmen at 3 a.m. after our first game. In that moment, I realized I finally felt welcome for the first time since coming to campus and that CUMB was one of the warmest, most accessible spaces at Columbia.

Yes, the band has made many mistakes—I’m the first to admit it. But as poet laureate of the band, I’ve continued the work of my predecessors to ensure that all members of our organization have a say in our scriptwriting process and that our humor reflects the values of our organization by always punching up, work that’s reflected in our recent scripts. The entire band has spent years working to make CUMB a diverse place where humor and tradition can coexist with stress relief and solace for all those who wish to join or attend our events, regardless of their identity, musical ability, or economic status.

Various publications have covered how detrimental the loss of our spirit at games will be for the Columbia community. That’s something we in the band feel viscerally. In preparation for this op-ed, the Executive Bored collected responses from current band members about how the band’s defunding has impacted them. “I am devastated at [Athletics’] decision to ban us from playing,” said a sophomore bandie. “It was a way that I knew that I could support my fellow students and hopefully bring some spirit to an all-too-often lackluster crowd.” (Unlike what some people have been saying, we don’t cheer for the other team.)

But this coverage, Columbia’s administration, and at times, the student body itself often forget that the marching band isn’t just vaguely menacing instruments stacked under a trench coat. We’re students, coming from every undergraduate school (with some graduate students as well), and many different majors. We take the same classes, we eat mediocre burgers at JJ’s, we pull all-nighters in Butler (just probably not in 209). We’re students and we’re hurting due to this threat to our community. It's summarized best by a junior bandie: “[The band’s defunding] filled me with a sense of lost community and voice.”

If the band dies, this campus will lose something it can’t recover. That's true even if you ignore the decades of tradition we offer. Unlike other music groups, the band provides free instruments for those who don’t have their own, free lessons, and reimbursements for meals at games. Without these resources, first-generation low-income bandies would be unable to take part in the campus music scene. Additionally, clubs at Columbia can be incredibly selective and some students are left feeling like it's too late to try something new, even though college is the perfect time to experiment. CUMB accepts everyone who walks through our doors so anyone can pick up a new hobby if they're interested. We also maintain a come-when-you-can attendance policy; whether you scream your heart out at every rehearsal and game or just show up once a month to blow off steam, you're still a bandie. As far as we know, chamber groups haven't started accepting wet floor sign players and beginner flutists, and I imagine they frown upon more than one or two missed performances.

But most importantly, the campus loses a group where members aren't focused on building their resumes. The band is a place where the toilet seat player matters as much as the jazz trombonist. It’s a place where people can safely socialize, helped in part by the band’s years-long commitment to maintaining a safe environment. It’s a place where we can vent our frustrations about this campus and world, which feels like it's falling apart, in a way that makes people laugh and dance. But above all, it’s a place where we’ve found a home. A new member wrote, “I’ve been struggling to find anything resembling a “family” [on campus]—the band has gotten pretty close.” Countless others, new recruits and veteran scramblers alike, echoed her sentiment.

We all know it’s hard to be a Columbia student. Stress culture makes friendship feel like another thing to check off your to-do list, and real community becomes elusive at best. I and countless others have managed to build a real community within the band. Now the administration is trying to take that away from us.

If you value campus community, combating stress culture, freedom of expression, and the continuation of a 115-year-old organization, we in the band urge you to contact University President Lee Bollinger’s office at (212) 854-9970 to lodge an official complaint or donate to our alumni association.