Let me read my damn tarot cards in peace

Let me read my damn tarot cards in peace 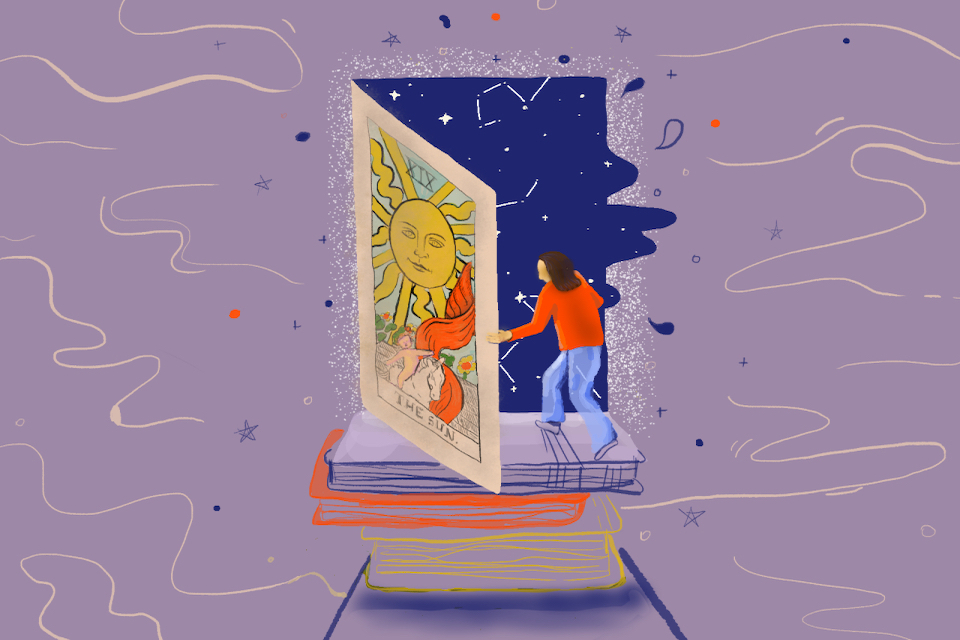 The Nine of Wands, the Three of Wands, and the Two of Swords stare up at me from their place upon my comforter. I am offended. When I began shuffling, I asked about the energy of this column, not for my tarot deck to come for my ass. I could practically see it shrug its shoulders as it hit two birds with one stone in its answer. If you study tarot, know that the first thing you learn is that the cards cut through the crap, whether you like it or not. They’re your friend who can be overly harsh sometimes, but only out of love and worry for your well-being. They’re your Virgo friend.

Secular fringe spirituality—which includes but is not limited to tarot, astrology, chakra and other energy works, crystals, numerology, and other forms of divination—goes by many names: New Age spirituality, the metaphysical, witchcraft, and the occult are a few examples. I like to call it mysticism.

My interest in the mystic first began casually during high school. As I grew older and life became more complex, I found myself reading about astrology to understand myself and to help interpret my tendencies and traits. Last summer, when I found myself backed into a corner with no further way to logic it out, I turned to mysticism and reached out to a tarot reader for guidance. It’s not just me spiraling into some mystical fever dream either—astrology is everywhere on social media right now, from zodiac meme accounts to serious astrologers who provide readings for a living. Plus, in the rising era of mindfulness and self-care, an increasing amount of people are turning to mysticism to seek answers and find comfort.

What really perplexes me is the skepticism so many on this campus have for the mystic. I’ve encountered people who roll their eyes at mysticism then begrudgingly fork over their birth info (a guy I was seeing once said, “I don’t believe in astrology, but I’m a Scorpio”). I know others who think less of me just for believing and partaking in it. I’ve even met some who outright aggressively despise it, shame me for it, and try to maliciously sabotage it.

Most people who partake in mysticism do so with the same intention as I have—to receive spiritual guidance and to use it as a language through which to interpret and contextualize self-care, mindfulness, healing, and growth. This community is generally self-contained and respectful of boundaries—I’ve never witnessed mysticism pushed upon an unwilling recipient.

So, why does mysticism receive so much unwarranted hate?

First and foremost, society attempts to discredit historically female interests and skills, as well as the relatively large number of queer individuals who’ve adopted this type of secular spirituality thanks to organized religion’s estrangement of the LGBTQ+ community. Opposition toward the mystic from academia, in particular, largely stems from academia’s roots—roots planted by and biased towards Christian, white, cisgender, and heterosexual masculinity. This causes an easy and direct conflict with mysticism, seeing as many mystic practices trace back to non-Christian communities of color and how modern-day mysticism is female-dominated.

Columbia, as an institution, prides itself on its commitment to logic. Generally, emotional distance or complete emotional detachment is intertwined with the concept of logic. Paired with the rise of modern science, mysticism is quickly and deftly shot down on this campus by arguments that raise issues of inherent bias, the irrationality of intuition, and a lack of testability on mysticism’s part.

These commonly raised issues might be valid if mysticism was truly arbitrary. Mystic practices base themselves on their own systems of rationale—for example, astrology uses geometry (google “astrological aspects” and then try to tell me that astrology is all pulled out of some loony cosmic witch’s ass), each suit of the tarot represents a different element of existence, and a tarot card’s number typically refers to a similar situation across the suits (i.e., all the aces point to a treasure trove of potential energy in whatever area of life the suit correlates to).

Still, in spite of all the criticism, a persistent and lovely flourishing of mysticism thrives within the student community—especially the student community at Barnard. “Name, year, school, major, and sun sign” are often prompted during club icebreakers at the beginning of the school year and tarot readings are advertised via Facebook posts in Barnard Buy Sell Trade.

On the day of Midnight Breakfast, the Student Life department hired a professional astrologer to provide birth chart readings to students in the hours leading up to the event.

Barnard, as a women-oriented institution, should theoretically foster a safe space for female traits and interests. Interestingly, however, some of the most avid mystic-haters I’ve met are Barnard-affiliated—that is, these supposedly feminist students are not only trivializing, but actively shaming a traditionally women-led practice. In light of this, I question just how committed these individuals are to un-internalizing systematically oppressive masculinity if they continue to belittle feminine occupations. Even at a women’s college with a progressive student body that claims inclusivity for all facets of womanhood, traditionally female mysticism is shunned.

At the end of the day, my distress over my triple-Leo placements isn’t harming anyone, and it’s not like I’m casting hexes with my tarot self-readings. My three-card pull comforts me—the Nine of Wands reflects my exhaustion but encourages me to persist with and defend my work; the Three of Wands shows my efforts paying off and implores patience; the Two of Swords warns that I may find myself in a conflict, perhaps even in defense of this very column, but reassures me that I can trust my heart and my intuition. After all, where else at Columbia can I turn to at literally any hour of the day to find guidance? So unless you want to be my 3 a.m. therapist, let me read my damn tarot cards in peace.

The author would like to make clear that she does not view mysticism as a substitute for therapy or mental health treatment. If you’re serious about your friendship with her, you’ll volunteer your birth info nbd, and if crystals fall out of her bra, don’t worry about it. She’s a baby tarot reader in need of practice and is happy to provide mini-readings for free. Drop her a line at krc2158@barnard.edu. Please Remove Your Shoes runs alternate Wednesdays.