In the Lebanese revolution, Kilna ya3ne Kilna: All means all

In the Lebanese revolution, Kilna ya3ne Kilna: All means all 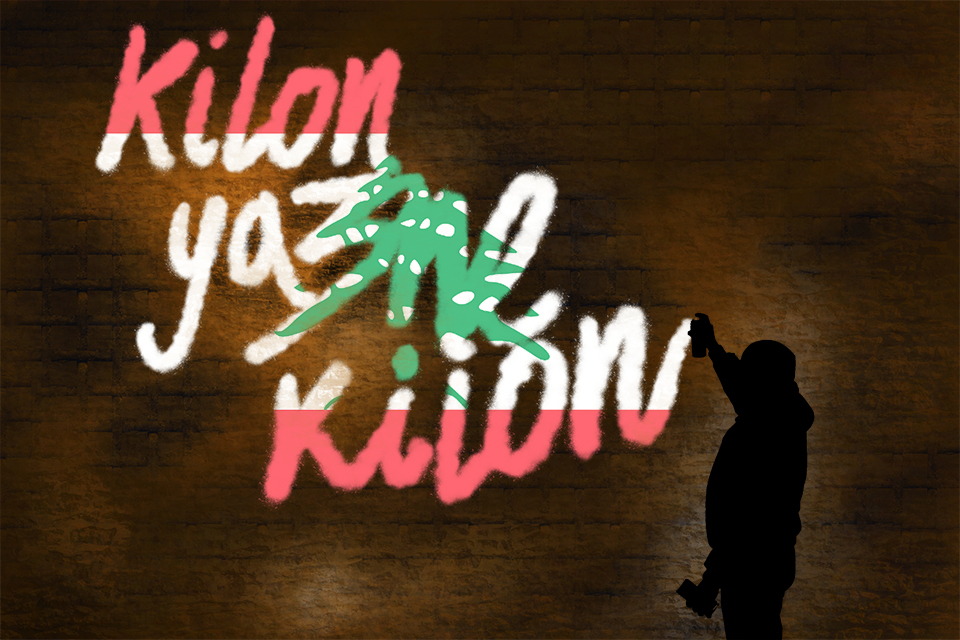 Let Thursday, October 17th go down in history as the first time I ever thought, “what a good day for democracy in the Arab world!”

To say such a sentence out loud sounds humorous and borderline delusional to anyone who knows the history of the region. This date, however, marks the first of the organized protests in the current Lebanese revolution. Those who are familiar with the political climate of the region may be prone to thinking, “Protests in yet another Arab country? So, just another Thursday?” And usually, I would be inclined to agree, given the regions’ turbulent decade. The frequency of protests in the region, stemming from the Arab Spring, has left us desensitized to dissent and demonstration.

Understanding the motivation behind these protests would require a crash-course in the multitude of entrenched institutional flaws in Lebanon. These issues, regarded as “the build-up” to the revolution, leave no realm untouched. The central issue is that Lebanon’s political elite— whether it be their 81-year-old speaker of parliament or their prime minister, who seems to have inherited the position from his father—have held onto their seats like children in a game of musical chairs. This rampant corruption further extends to other serious societal problems, such as an outdated judicial system, high youth unemployment, lack of basic healthcare and social security, and inadequate public education. Other relevant issues are environmental concerns: increasing levels of pollution, failing infrastructure, near-imaginary public transportation, and recurrent blackouts.

The breaking point, however, came after the recent fires that were so poorly handled by the incompetent government left many distraught and homeless. Imagine this: The disaster relief was so inadequate that the Jordanian civil defense—along with those of Cyprus and Greece—had to aid in extinguishing them. Just two days after the fires broke out, the ministerial cabinet announced new taxes on the people to “reduce budget deficits.”

Yet the mainstream media paints a different picture, reducing the long list of demands and struggles to a single “WhatsApp tax,” which in turn largely trivializes the gravity of the Lebanese struggle. If you’re confused as to what a WhatsApp tax is, so is the rest of the world. Leave it to the Lebanese government to innovate such a concept.

All jokes aside, here is where I begin to take issue. The consequences of such misrepresentation in the media vastly undermine the Lebanese cause.

This issue is important to discuss because to be on this campus is to understand that once an issue impacts one of us, or a community of us, it impacts all of us. For this reason, we should take it upon ourselves to be aware that it is going on—and not be influenced by misleading media representation.

Lebanon is a country plagued by sectarianism. Simply put, sectarianism is a form of discrimination and prejudice based on religious sect that is very much culturally manifested. Lebanon itself is divided between Sunnis, Shias, Druze, Maronite Christians, and another fourteen sects with a deep-rooted history of violence towards one another (Google Lebanese Civil War). Sectarianism is even accommodated for under the National Pact, a “gentleman’s agreement” that sets up the government so it is comprised of a Maronite Christian president, a Sunni Muslim prime minister, and a Shia Muslim speaker of parliament.

This revolution marks the first instance in my lifetime when the people lay down their ammunition against one another, only to carry their unified armor against a common, non-religious enemy. Their chants, including the echoing “kilon ya3ne kilon” (All of them means all of them, referring to the Lebanese unchanging political elite), embrace an identity marked by nationality and nationality only. As an undivided entity, the Lebanese population have single-handedly reinvented the art of civil disobedience, turning their protests into daytime barber shops and open buffets, nighttime raves, and most recently, a rendition of “Baby Shark”. Day after day, Lebanese women continue to fill the streets. Allow me to reiterate that: Arab women are leading a revolution to fight for the resignation of the government.

And yet, the Western media community is failing to report the truth. Oh, the irony, in that an Arab country that aims to peacefully achieve the American hallmark of democracy initially received headlines along the lines of “Lebanon scraps WhatsApp tax as protests rage”. A wave of local Instagram accounts ended up evolving into news sources after Western outlets failed to portray the protests with the seriousness they deserved.

A greater issue is that these headlines fail to mention that the ongoing protests have been successful because they have far surpassed the borders of Lebanon. They have reached the Eiffel Tower in Paris, the Chemin de la Côte-Sainte-Catherine in Montreal, and Washington Square Park in our own backyard.

I recognize that a natural question to emerge is: So what? Good for them, but why should I, as a non-Lebanese citizen, care?

A substantial proportion of the Columbia community is made up of immigrants. In this particular case, it’s primarily made up of expats that have played an equal role in the Lebanese revolution as those back home, but have done so with a heavy heart of knowing that they are missing out on their country’s trailblazing history.

I can guarantee you that not a single one of these individuals has left their home from their own free will. We are not expats because we wish to be—we are expats because our countries are in no shape to accommodate the future we deserve. And yet, no one is more proud of those who stayed in our countries than those who saw the need to leave.

Acknowledging the struggle and remaining informed is support enough.

And on that note, kilna ya3ne kilna.

The author has spent the last 10 days listening to Joseph Attieh’s “El Haq Ma Beymout” and entertaining herself with the posts of the Instagram account @Overheard_Beirut. For quality content account recommendations (or for any other comments or concerns), feel free to email her at lna2116@columbia.edu. Here’s the Shai runs alternate Tuesdays.