The Art of Unset

The Art of Unset 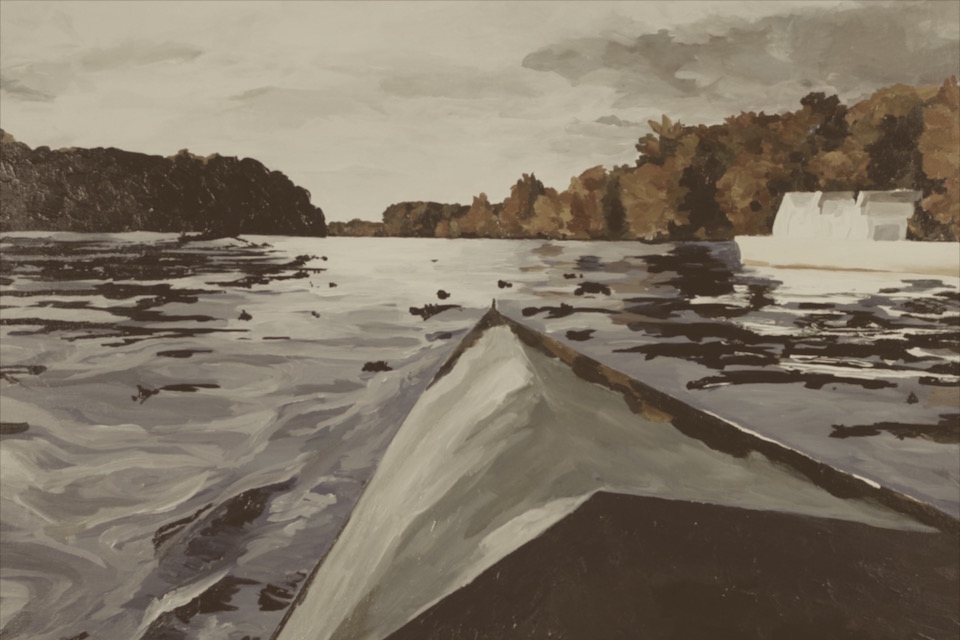 We took out a pair that morning, a boat that sits just two rowers. My teammate and I took to the boat and to each other quickly—balancing easily and pushing the bow up and out of the water. I think both of us were more comfortable together in that shell than we had been in a while. Even the water was welcoming. With barely any wind and a low tide, the water laid shallow and still. The sun rose as the practice went on so by the time we met up with the other pair, the light was gold. The water—everything, really—was precious and yellow-hued.

When we got to the other end of the course, she and I spun the boat as we waited for my teammate, Sophie, and her partner to reach us. I glanced over to where they were—the motorboat and the other blue pair about 200 meters away. Sophie was taking strokes by herself, turning the shell in a swooping curve. Our coach’s words, initially indistinguishable, became louder and more excited as Sophie began to grip the water and push the boat further per stroke.

I laughed a little and so did my partner.

Two years ago, my sophomore fall, I had a day just like that. Maybe a month after coach had started working for the women’s team, I was in another pair, taking strokes by myself at Overpeck. In the dinky jon boat, our coach left the rest of the group to watch the circles. And the light was just the same. There’s a video somewhere and I remember the day exactly—we hit the 500 meter buoy and I figured out a couple things about how to row that fall. Seeing it happen again was like looking in a mirror at a different girl, a different water way, but everything else was the same.

More and more, I find myself aware of time passing. After the Ivy League Championships last spring, I went home, but instead of finding the same inspiration to train like the summer before, I froze. I couldn’t bring myself to leave the house, to get on the water, or to workout at all. What had been the point of all this training when I knew I wasn’t ever going to be a professional athlete? This was just this thing that I did for hours every day that I think a lot of people wanted me to believe was a waste of time. I began to think they were right, especially when the results were not particularly quantifiable.

When I went back to New York, I thought that it would go away. For a couple of weeks, I started training twice a day again, frantically trying to recover from a month of nothingness. But those same doubts followed. I resented and hated every minute of training, and in that, became so lost. I stopped going into Dodge. I felt guilty and terrible about it too. I furiously didn’t want to let go of the sport I loved so deeply, but some very gray, scary part inside kept telling me, “It’s time to quit, you were never good at this, and you need to figure out what comes next.”

Practice at the New York Athletic Club started again some two weeks after I arrived. It meant waking up at 4:25 a.m., it meant the best truck rides in the adventurous dark up to Travers Island, it meant rowing again with a little bit of purpose.

Sophie is one of my best friends. She is a walk-on and a transfer—putting her in a unique position of starting rowing later than the rest of us. Even more unique is the fact that already in her second year of the sport, she excels, winning workouts and dominating the ergs. And I am absolutely certain she will get better and better for a long time. By contrast, I am in the middle of my eighth year of this sport. And I think I can say I’m far more technically competent at this point in the boat. But I know the limits of my strength and I get injured not infrequently.

Of course, those feelings didn’t magically change that morning (or through the time I spend with her). But I remember it and it allowed me to pinpoint some things I’ve been desperately feeling. One, I am not special, and two, things are changing and it’s hard to let them change. I get annoyed at Sophie sometimes out of pure selfishness, when I see the joy she takes in rowing that is still so simple and pure. Like just another character in the ever-passing cast of Columbia, we have four years of rowing: we learn some things, love some things, and then leave. It makes my death grip even tighter, thinking I can force it to keep set for one moment longer.

Realizing this eternal pattern of change made me want to row again. Obviously, the cliché-but-true notion of realizing that you’re near the end makes it a sweeter experience. But more so, isn’t it a strange and wonderful moment in life to realize you are not the only one? My coach will coach other people. Sophie will move the boat. I will graduate this spring.

Rowing has been so special to me. I’m typing this on the floor of the rowing room in Dodge watching some of my fellow seniors do a workout and just thinking about how amazing it is to see us right now together (I’m getting soft, I know). These moments will continue to happen for all the women who experience something special on this team. Yes the whole entirety of my “Columbia experience” has been mine—from surgery, to my pre-Med classes, to a hell of a lot of rowing, to a deep appreciation for organic chemistry—but is it not also comforting to know that it is not a lonely thing? Somewhere and someday, someone will do the same things you did at Columbia.

Sophie started to back it down towards us, but soon everyone realized it would be better if we just tapped it up. So we did. Our coach drove his launch behind our boat for a little and called us the old dogs. My pair partner hollered some response and I laughed. We did some starts and we did some minute pieces. The sun rose fully over the Long Island Sound and by 7 a.m., we took the Columbia blue shells back to the dock.

Coach has this idea that it doesn’t matter if the boat is set. Some mornings that drives me crazy. When stroke seat’s oar spends half the practice slapping the water below, I can go a little crazy thinking no way can I row well and neither can anyone else. It’s our failure to match our handle heights and drive timing that keeps the shell from tapping along the way it should. I want to rush it along and get the rate up so the boat evens out. But he says sometimes, just let it be unset. Work on the time in the water and eventually it will run smoothly.

Hopefully, I am learning to adjust. As with all loves, they change over time. I’m not quite ready to leave yet. I have a lot to figure out and do. But I guess all of this is necessary to get there, so that when it is really time, I can be ready to go.

Sabina Maurer is a senior in Columbia College and a member of Columbia Women’s Rowing team. Her column, The Art of Unset, ran alternate Fridays.