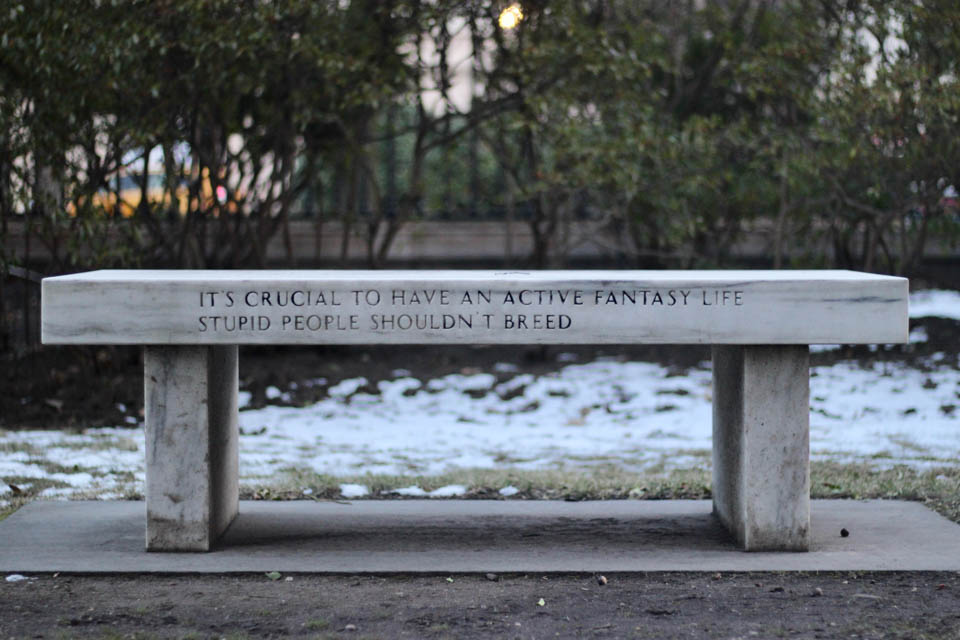 In 2011, a Barnard trustee emerita donated a Jenny Holzer piece to her alma mater. Barnard honored this as its first major art acquisition—a fine, multiuse sculpture that would surely engender conversation. The bench most prominently displays the statements, “IT’S CRUCIAL TO HAVE AN ACTIVE FANTASY LIFE” and “STUPID PEOPLE SHOULDN’T BREED.” This is Holzer’s great seduction: a completely innocuous statement punctuated with a genocidal slogan. Students’ wry delight in the bench is the epitome of what Holzer, I believe, is critiquing; displaying this bench at Columbia shows a lack of self-awareness—it’s a testament to Columbia’s elitism and should be removed.

During my first year, I expressed my concern about the bench’s prominence to several friends and was quickly scolded. My peers believed the sculpture to be ironic. Holzer intended these statements to challenge subjectivities and demand our critical engagement. However, despite our good intentions, patterns and repetition can bypass a viewers’ critical thinking. Any statement planted in the center of an institution like Barnard holds a certain weight. Aesthetics should not be given a pass from sociopolitical scrutiny.

Can the statement “stupid people shouldn’t breed” be ironic when the study of eugenics, the Nazis’ Aktion T4 project, and compulsory sterilization laws that affected nearly 70,000 Americans were created by American academics and funded by American foundations such as the Carnegie Institute and the Rockefeller Foundation? Columbia—alongside Harvard, Cornell, and Brown—was among the first universities to offer eugenics courses. By 1928, there were 376 eugenics courses offered at universities across the country. There is nothing ironic about the history of eugenics at Columbia.

For all our reckoning with racial and neural determinism—when one percent of families in the United States hold 40 percent of all the nation’s financial resources and when Columbia and Barnard’s liberal arts-based education can be leveraged to foster a culture of individual advancement and heralds knowledge as a pursuit for personal recognition—there is no irony at all in the epithet that “stupid people shouldn’t breed.” This is especially true when the study of mental incompetence has historically fallen along lines of class and race.

I believe that too often in our “ivory tower,” we reify foundational myths of meritocracy: I deserve to be here because I am smart and work hard, and there are others who do not deserve to be here. Invoking progressive era social Darwinism would not be unfounded; our meritocracy survives today through the same Progressive Era sentiment that seeks to reproduce itself through class hierarchies. Only today, we employ new euphemisms to describe the differences in our shared language, behaviors, and social networks. Intelligence is no longer overtly racialized or classed; it’s reduced to just its essence—smart kids and stupid kids—as determined by eugenicist pedagogy, access, and testing.

At Barnard and Columbia, I have often observed the subtle indignities of a recitation where classmates smirk over another student’s mistake or malapropism. I have seen memorization and linear thinking privileged over intellectual humility and curiosity. I have observed students employ immutable prognoses for those they deem beneath them, using labels such as “basic,” “ratchet,” and “jappy,” that are almost always gendered. I have seen campus politics and praxis belittle one’s formative young adult experiences as provincial—fixed to ideas inherited from parents and community—and pronounce one incapable of ever changing one’s mind. I have seen students’ haughtiness towards service workers and Columbia employees.

In my eyes, it’s this elitism that allows us to wryly delight in or ignore the implications of any reference to “stupid people.” Are we unable to imagine another’s life experiences apart from our own? Most of us struggle at some point in time: some with addiction, depression, trauma, disability, and life’s regular vicissitudes and failures. Many without the financial means never even have a shot of making it to Barnard or Columbia. Those who do attend may feel inadequate because, with an elite education, you can and should be “perfect.”

In this day and age, multiculturalism tells us we all have inherent value, and still, some people are “smart” and others are “stupid.” This dialectic should give anyone pause. Our conception of the manifest “stupid person” rests on the idea of a unitary intelligence, devoid of a clinical definition or scientific consensus.

Eugenics is not a relic of Nazi Germany; it is an American project preserved in education pedagogy, the structural inaccessibility of higher education, and its resultant elitism. That is to say, critiquing Columbia’s elitism should not be construed as an endorsement of right-wing tactics meant to sow a categorical distrust of the academy. The culture that encompasses both institutions calls for us to confront Columbia’s history of eugenics side-by-side with higher education’s structural inaccessibility. However, addressing Holzer’s bench would be a good place to start.

The author is a Barnard College senior majoring in the Asian and Middle Eastern cultures department.