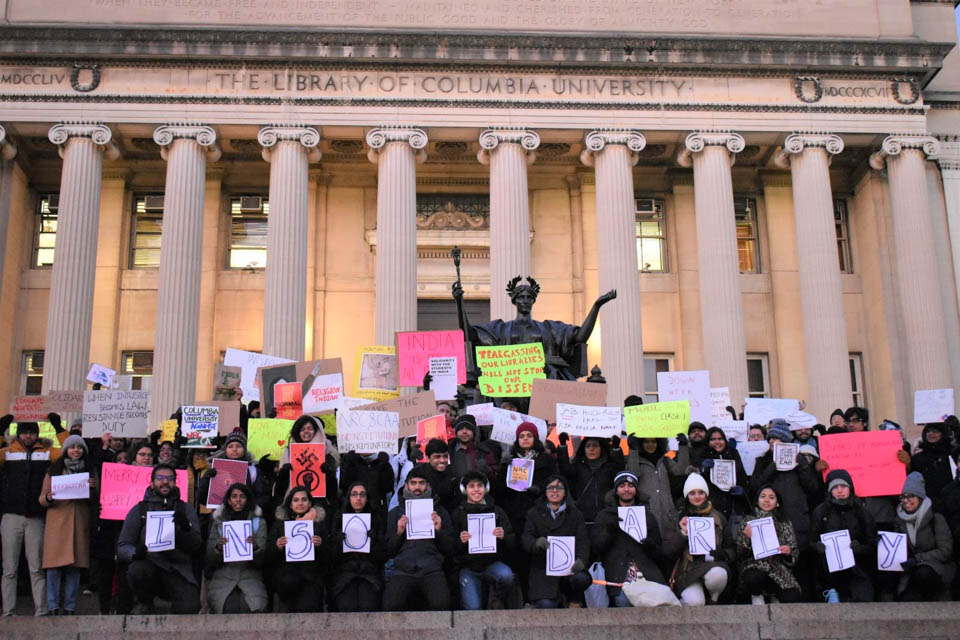 Last month, the Parliament of India adopted the discriminatory Citizenship Amendment Act, which offers a path to citizenship for Hindu, Sikh, Zoroastrian, Buddhist, and Christian migrants from Afghanistan, Bangladesh, and Pakistan. Notably, this act excludes Muslims. Additionally, the incumbent Government has promised to implement the nationwide National Register of Citizens and National Population Register, a citizenship and religion reporting exercise that will place vulnerable communities at risk of deportation and statelessness.

The CAA, coupled with the NRC and NPR, emulates a system of tiered citizenship based on religion with the specific exclusion of Muslims. Given the history of Muslim discrimination by the current government, these actions seem to allow for the persecution of Muslims on an unprecedented scale.

We, a coalition of concerned graduate and undergraduate South Asian students at Columbia University, lend our unequivocal solidarity to individuals protesting the NRC, NPR, and CAA. Columbia students have been active allies to these nationwide protests, which have widely occurred on Indian university and college campuses. Columbia’s South Asian Feminist Association spearheaded a petition against the CAA and NRC that has been signed by professors, students, alumni, and the University administration. Nearly 100 individuals attended a solidarity gathering on Dec. 19, despite the frigid cold and impending final exams.

Another gathering has been planned for Jan. 30, at 1 p.m. on the Low Library steps where we hope to stand in solidarity in support of the protests in India.

Unfortunately, there has been a brutal crackdown by the Indian government on peaceful protest. We are disturbed by the increase in restrictions placed on public gathering, unlawful detentions, random seizure of property of minorities, use of stun grenades against unarmed protesters, and police brutality that has led to the torture of children and death of more than 20 civilians. Furthermore, the constraints on freedom of speech in Kashmir and Indian states due to growing internet shutdowns are concerning. Utilizing seemingly authoritarian tactics to suppress democratic dissent is not befitting of the world’s largest democracy.

Additionally, the Supreme Court of India recently forewent placing a hold on the new citizenship legislation, despite over a month of numerous protests, and gave the government one month to respond to petitions citing the law’s unconstitutionality. Thus, we believe it is imperative to continue to support the Indian people in their opposition.

We encourage members of the Columbia community to be cognizant of the situation and check in with their Indian Muslim, Muslim, Dalit, Adivasi (indigenous tribal Indians), and other marginalized South Asians friends and affiliates during this distressing time.

This open letter was written by a coalition of concerned South Asian students from Columbia University’s School of International and Public Affairs, department of economics, department of sociology, Law School, Business School, and undergraduate colleges. The coalition writes to express its concern regarding democratic rights in India in the wake of the decision to enact the Citizenship Amendment Act, the National Register of Citizens, and the National Population Register.