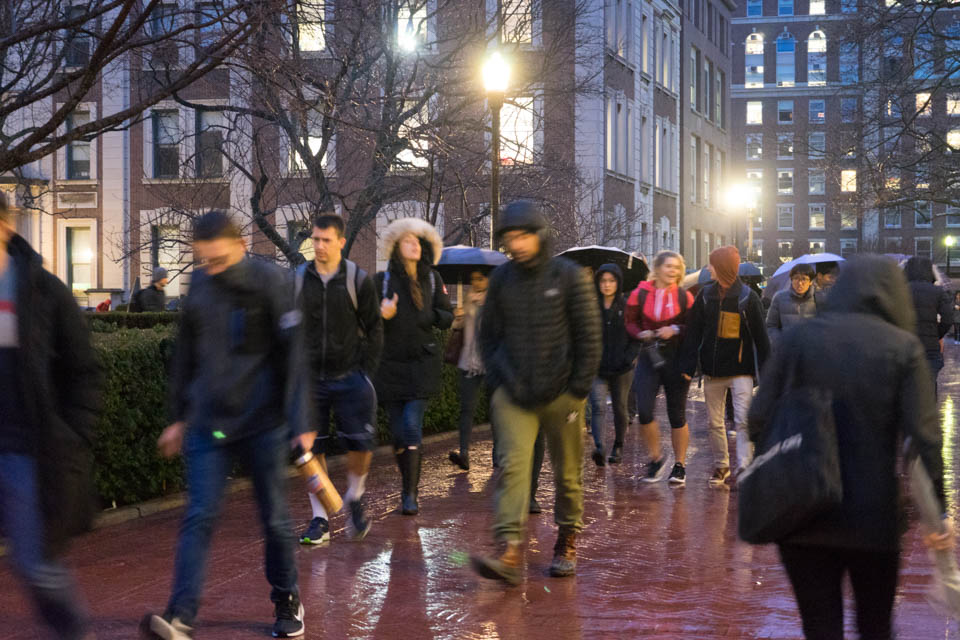 While many undergraduate students may remember the tremendous struggle it took to finally get the Columbia administration to bargain with graduate workers, fewer know what has been happening at the bargaining table since then. As organizers with Student-Worker Solidarity, Barnard and Columbia’s United Students Against Sweatshops local, we have consistently collaborated and organized in solidarity with the graduate workers’ union.

In November 2018, the Columbia administration finally recognized Graduate Workers of Columbia-UAW Local 2110, the union for teaching assistants, research assistants, and graduate instructors, and started bargaining. GWC, formerly GSEU, has organized since fall 2000 to represent the rights of the aforementioned parties. Issues like late pay, wage increases in an increasingly expensive city, international student protections, better health care plans, and fair processes for cases of sexual misconduct have impelled graduate workers to organize. Recently, the issue of fair process for cases of sexual misconduct has become a problem at the bargaining table.

Last year, GWC proposed that the University allow victims of sexual harassment or discrimination to request outside arbitration services for these grievances. In this process, an arbitrator, acting as a sort of mediator, sits with both the grievant and the person, group, or entity implicated by that grievance. The arbitrator would be agreed upon by the union and the administration and would resolve grievances that could not be solved through internal department processes. Most importantly, this arbitrator would be independent of the University.

The arbitrator’s independence would create access to an alternative process separate from Columbia’s sometimes troubled and difficult Equal Opportunity and Affirmative Action adjudication. In the past, adjudication has ended in rulings that have excused “a possible case of sexism on the grounds that the person accused was only dismissive and disrespectful to ‘a certain type of woman.’” The administration’s position on fair recourse for survivors is especially pertinent, as Columbia’s existing sexual harassment response processes have allowed professors like William Harris to go unchecked for years.

The issue of fair recourse for sexual harassment and discrimination in the workplace was one of the most pressing reasons for unionization. Seemingly recognizing the centrality of these issues to student workers, Columbia’s lawyers and administration, in a sign of good faith, agreed to allow requests for arbitration after the EOAA process is completed.

However, last Friday, the Bargaining Committee’s report on the session claimed that the administration announced to GWC’s bargaining team that they were no longer willing to agree to an arbitrator several months after they negotiated this compromise. They also stated that Columbia’s lawyers from the labor and employment law firm Proskauer Rose no longer believe that the process of outside arbitration would be legal under Title IX guidelines, after having seen an argument published by Harvard where a similar labor struggle over sexual discrimination has been ongoing.

Putting aside whether Proskauer Rose truly did not recognize that its original proposal was illegal for months, GWC’s proposal for fair recourse is already in place at other universities. The University of Washington and the University of Massachusetts Amherst use similar language to that proposed by GWC in their contracts, and New York University has had language similar to what the union proposed for non-discrimination for nearly six years. The practice of arbitration is widespread in many universities across the country, both public and private. Columbia seems to be merely hiding behind Harvard’s legal argument in a similar situation while ignoring the other cases where outside arbitration has been allowed and functioned for several years.

This ultimately leaves us with one crucial question: What is Columbia willing to bargain over?

This step backward suggests that Columbia is not bargaining in good faith. It is unfortunate that the University seems to be using the fight for the rights of sexual harassment and discrimination victims as a battleground for this newest in a long list of shameful behavior at the bargaining table.

GWC had to push the administration to agree to a compromise, and the administration now argues that GWC’s sexual harassment and discrimination grievance procedures might not be legally feasible despite evidence GWC provided to the contrary. Columbia has suggested at various points that certain proposals, such as health benefits, aren’t even going to be considered at the bargaining table. Columbia’s recent refusal to bargain seems like more than simply a legal issue or a singular display of bad faith.

This issue is not only about graduate and undergraduate teaching assistants, research assistants, graduate instructors, and other academic student workers. It can affect the entire campus and all student workers. Regardless of what will be said in the contract, Columbia needs to reorganize its system for dealing with cases of sexual harassment and discrimination which can also affect undergraduates who undergo the same processes and traumas.

Columbia has often been in the vanguard of the graduate student union movement. As a result, we are used as an example for other negotiations across the country, like when the right to establish graduate student unions at private universities was established in 2016 through the case GWC brought to the National Labor Relations Board. Any undergraduate who intends to go to graduate school or cares about someone who is going to be a graduate student worker at any university may be affected by the result of this contract.

In the same vein, we all have the ability to influence the right kind of precedent. With a strike authorization vote on the horizon, it is critical that undergraduate students mobilize to support graduate workers here at Columbia. We, as Student-Worker Solidarity, ask you to join us and continue to stand with graduate workers in their fight for justice. In doing so, you will support your teachers and fellow students as well as stand in a proud lineage of Columbia students fighting for what is right.

Student-Worker Solidarity fights for workers’ rights and economic justice at Barnard and Columbia. It is a local of United Students Against Sweatshops.