Don’t throw out my Legos

Don’t throw out my Legos 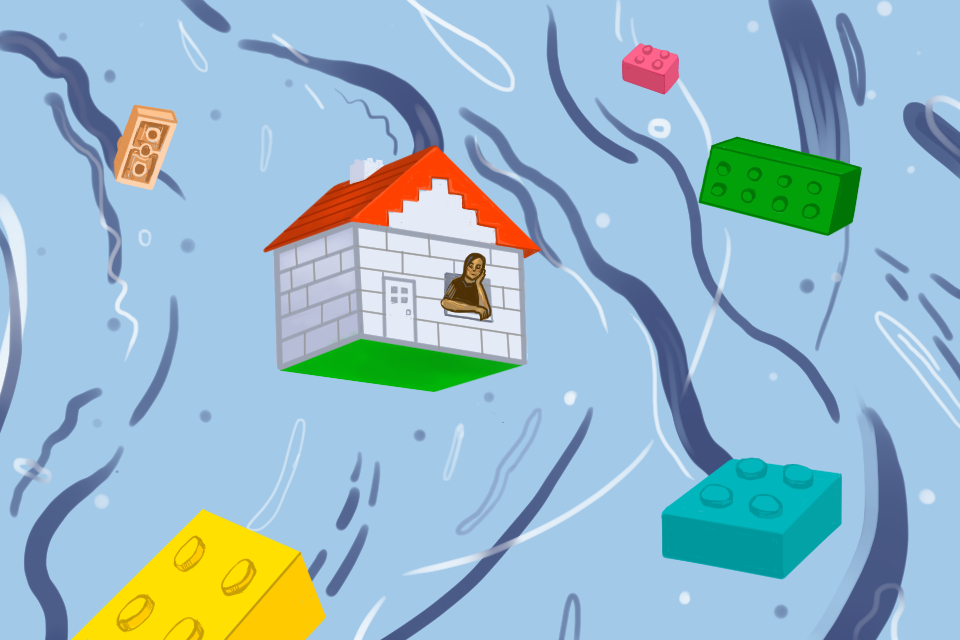 Living with one’s family in a tiny apartment was so commonplace to my understanding of what a standard household looked like that it translated into my imagined recreation of a home. However, even if my Lego house and Lego family were block simulations of my life, they didn’t capture the full reality of living so closely together.

Like many other students coming to campus, living in the dorms was the first time I had my own space, my own room. It was much easier to differentiate emotional, mental, and academic spaces while on campus compared to at home. As much as there was a desire to help my family as much as I could, there was also an overwhelming expectation to do so, and at times it came at a personal cost.

The routine that I had created on campus, one that sectioned time off for mental health checks and socialization in addition to classwork, was not one that I could reproduce at home. With every part of my house being a shared space, it was difficult to maintain such routines because of the immense responsibility to be present for my family. Over time, I began to spend more and more weekends on-campus—home was just not a place I could, in good faith, continue to work without it affecting my relationship with my family.

As one grows older and their sense of self develops further, the need for space, both physical and emotional, becomes all the more pressing—especially when different tensions begin to arise between people. In “Personal Space,” Roger Kneebone looks at cultural anthropologist Edward Hall’s definition of proxemics, a theory of non-verbal communication that analyzes how people establish spatial boundaries with one another to explore the necessity of space and distance. Establishing personal space is incredibly crucial to the maintenance of boundaries and correlates to one’s emotional welfare. But what if creating such a space is impossible because of a lack of physical space?

My routine of using campus as a place for personal space, as was likely the case with many other students, was flipped on its head with the growing number of coronavirus cases in New York as students were asked to vacate campus. With everyone in my family now back home working or studying virtually in spaces where there was virtually no personal space, it was inevitable that tensions would lead to sparks.

But with things worsening in my neighborhood, the sound of children playing and Spanish music drifting in the house from below no longer cut the now constant siren calls of ambulances across the street. Self-isolation became less of a theory and more of a practice we needed to put in place. Despite never leaving the house since I moved back three weeks ago, both my parents became sick, their coughs worsening and their fever “roller coaster-ing” every other day. With there being no self-identified space within the apartment, how could we self-isolate? What do I do when everything is shared but no longer could be?

I am grateful that I have a place to go back to having left campus, that I have a family to return to. I am grateful that I have the means to go back to parents who are not necessarily immunocompromised, and I am grateful that my relationship with my family was one that still allowed me to have a safe space to go to. In the wake of the growing number of cases in my city, my state, my neighborhood, it seems improbable that I will be leaving my house sometime soon, but I want to be able to take care of my family, have a better relationship with my parents, without losing more of myself.

For anyone in similar situations, I am sorry I don’t have answers. All I’ve really been doing is hoping that at the end of this, even if I do eventually leave the house, I don’t abandon my desire to redefine home and space with my family. All I can ask is that I have a space to call my own within that because I want to move out, but I don’t want to move on. Don’t throw out my Legos just yet.

The neighborhood that the author is from is being called “the epicenter of the epicenter” of the pandemic. It is one of the most densely populated neighborhoods in Queens with more than two-thirds of it home to immigrants. If you are able and have the means, please donate your MetroCard and/or directly donate to the Auxiliary of City Hospital at Elmhurst.