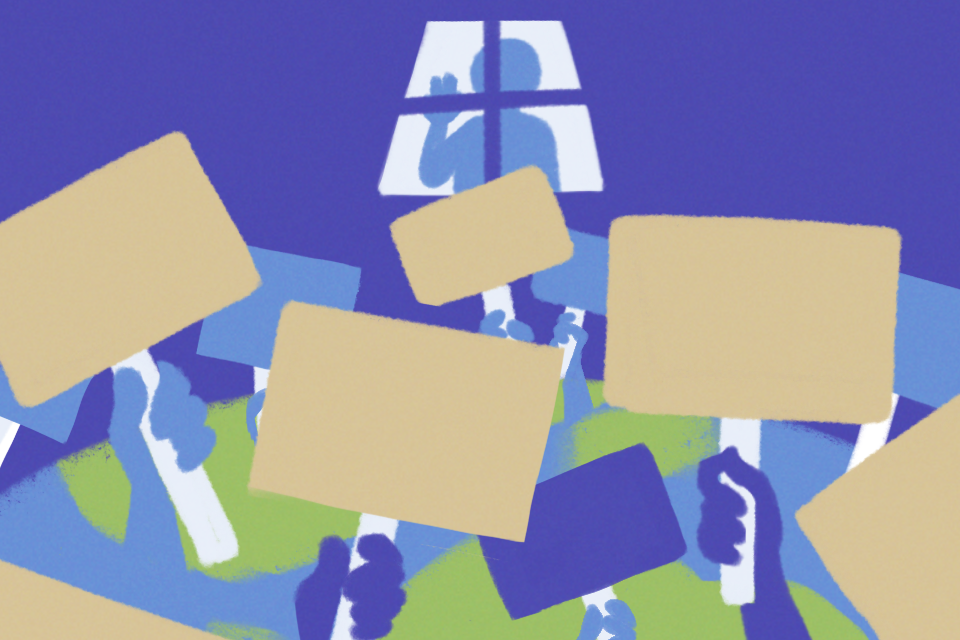 After I read about signs saying “Live Free Or Die” and “Isolation of the Healthy is Tyranny” held by the U.S. protestors, my naïve belief that the world was harmoniously united in this fight against the pandemic quickly dissipated. In Dubai, where I currently live, residents were forced to go into a three-week complete lockdown. During this time, we weren’t allowed to go outside without permission at all—we had to request permits to go outside for grocery shopping, hospital appointments, and even emergency situations. There was a fine of 2,000 dirhams—around $544—for being outside without a permit, and residents faced deportation or imprisonment for breaking the quarantine rules.

Yet, it didn’t seem like anyone felt that they were living under tyranny. Most residents considered these strict policies enforced by the government proof of its trustworthiness and ability to contain the outbreak. Instead of fearing the authoritarian regime I live under, I now find myself trusting it. And although I don’t find authoritarianism right under any circumstances, I asked myself whether living under such a regime was actually safer than living under a democratic one, such as the United States, in facing a threat like a global pandemic. The answer I’ve come to is complicated.

In our classrooms at Columbia, we discuss democracy and authoritarianism as conceptual issues, as theories, as principles, which we may or may not agree with. But when it comes to the tangible realities of these systems during crises like the pandemic, we see that both regimes come with their own set of advantages and disadvantages that have an unprecedented and perhaps unimaginable impact on our lives. This pandemic teaches us that a regime itself may not be a determining factor in how well countries have been able to contain the virus, but rather policy implementation and public trust.

It seems that authoritarian governments have the advantage of implementing and enforcing policies more quickly and forcefully. As dangerous and tyrannical as this attribute can be in times of regularity, the level of control that comes with the dynamics of authoritarian governments has allowed a firm establishment of policies necessary for containing the outbreak. Vietnam has been quick to respond, suffering only 270 recorded cases and no deaths. Despite the lack of economic resources for testing, the government implemented low-cost precautions that made use of a strict two-week quarantine and social contact limits. China was also able to put cities under lockdown; suspend travel, business, and schools; and impose restrictions in social interactions in just a few days—all actions praised as setting a “new standard” by the World Health Organization.

China has also been able to implement extensive surveillance systems through health code apps and cameras outside of people’s houses. Although these surveillance systems, unconstrained by privacy legislation, breach individuals’ rights to privacy in extensive measures, they help the government contain the spread of the virus by isolating the citizens who seem to be infected or vulnerable to infection. However, we also have to acknowledge that the aspects of authoritarian regimes that limit freedom of speech and expression can endanger their battles against the virus. For example, Li Wenliang, a doctor from Wuhan, tried to warn the Chinese government about the spread of the virus in December but was ultimately silenced.

At the end of the day, the governments that have best been able to regulate the outbreak could be determined by how well the citizens have followed the policies put forward. This is evident by both democratic and authoritarian governments across the globe having had varied successes in reducing the effects of the pandemic. For example, New Zealand has been able to almost completely eliminate the virus outbreak and is now loosening some restrictions. Its progress hasn’t depended on the government’s ability to strictly enforce regulations, but the people’s compliance with the regulations imposed and their trust in the government to make the right policies for the containment of the outbreak.

Some authoritarian governments have been able to ensure that citizens follow their policies by force, while some democratic governments have been able to rely on the trust they have fostered with their residents prior to the pandemic. In a democracy, the government needs to build this trust in order to work efficiently in times of crisis. Yet the American protesters’ lack of compliance or trust seems more reliant upon political party lines than anything else. There seems to be a disconnect between the protestors, who disregard professional opinions in favor of the current administration’s information, and medical experts, whom other Americans support. The United States appears to suffer more so from a lack of trust than from a lack of authoritarianism in swiftly combating this pandemic.

Regardless, we should all remember that in the end, whether it’s because our governments force us or because we trust their policies, what matters most is that we stay home.

Senem Yurdakul is a first-year at Columbia College studying sociology and creative writing. She is also on the Opinion staff. Her favorite word is “bewitching.” When she’s not under quarantine, you can find her still stuck at home because it’s scorching hot in Dubai.