A Jewish argument for divestment

A Jewish argument for divestment 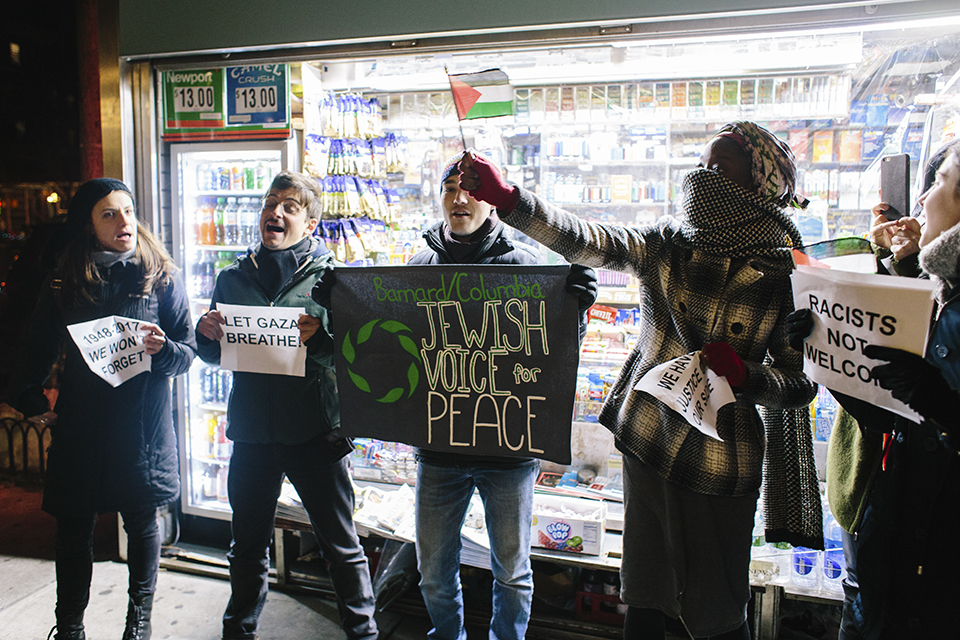 We, two Jewish students at Columbia University, lend our full, enthusiastic support to Columbia University Apartheid Divest’s efforts to pass the referendum that urges the University to divest from companies that violate Palestinian human rights. We do not believe that Jewish people have any unique authority to speak out against Palestinian oppression, but we write from a Jewish perspective to address what we perceive as false claims that the Boycott, Divestment, Sanctions movement is intrinsically antisemitic. These claims obscure the complexity of Jewish history in service of a political agenda that aims to suppress Palestinian dissent. As Jews, as leftists, and as people who do not support Israel, we emphatically reject this characterization.

Too often, Jewish voices advocating for Palestinian rights are told that they have internalized Jew-hatred, or a desire to see antisemitism persist. These accusations stem from the belief that Zionism—a movement that calls for the creation and preservation of a “Jewish state” in Palestine—is the only road to Jewish safety and liberation. Within many Jewish institutions in the United States, this notion is a dogma that is instilled in children from a young age: Israeli flags hung in synagogues, Israeli Defense Force soldiers as counselors in Jewish summer camps, and broadly, the conflation of all things Israeli with Judaism.

The truth is that Zionism is a distinct political ideology akin to the many other nationalist ideologies of 19th-century Europe, and as long as it has existed, it has had Jewish detractors. They have ranged from Orthodox Jews to secular Jews, from Ashkenazi Jews to Mizrahi Jews, from Jews living on occupied Palestinian land to those living in the United States, Europe, and elsewhere in West Asia and North Africa. Famous Jews like Hannah Arendt and Noam Chomsky, who identified as Zionists earlier in their youth, came later in their lives to disparage Israel. Albert Einstein once insinuated that Menachem Begin’s—the founder of one of Israel’s largest political parties, Likud— beliefs were akin to Nazi ideology.

Given that many Jews from many backgrounds, from the 19th century to this day, have been anti-Zionists, it is odd that campaigns like BDS have been widely panned by pro-Israel groups as antisemitic. We believe that, in its own right, this accusation is antisemitic: It equates Jewish people with Israel, insofar as it claims that to oppose one means that you oppose the other—this is plainly the “dual-loyalty” trope.

More importantly, these accusations of antisemitism function as part of a broader initiative to silence Palestinian resistance because they characterize Palestinians’ efforts to assert their rights as mutually exclusive with combatting antisemitism. The truth is that Israel, as a “Jewish state” constructed on top of one of the world’s most religiously and ethnically pluralistic places, has only managed to become exclusively “Jewish” because it subjected its non-Jewish inhabitants to decades of ethnic cleansing while simultaneously encouraging mass Jewish immigration from outside of Palestine in order to repopulate emptied cities and villages with supporters of the State of Israel. Palestinians have every right to organize against this ongoing existential violence. It is abominable to claim that this, by itself, constitutes antisemitism.

To stand in solidarity with the boycott, divestment, and sanctions movement is to stand in solidarity with Palestinians. It is to denounce a state that has produced 7 million Palestinian refugees with no ability to return to their homes or those of their ancestors. It is to denounce a state that has subjected Palestinians in Gaza to an over 10-year long blockade that has produced one of the largest humanitarian crises in the world. It is to call for divestment from a state whose actions fall clearly within the bounds of the United Nation’s International Convention on the Suppression and Punishment of the Crime of Apartheid.

For many American Jews, reckoning with the scope of Israel’s injustices is a process of dramatic unlearning. But more than anyone else, the myth that Palestine is exclusively Jewish land, suitable only for Jewish people and Jewish rule, impacts Palestinians. Of course, it is discomforting to confront the reality that the state, which many Jews have come to view as an almost utopian homeland, is actually predicated on the subordination and persecution of everyone else there. But this discomfort pales in severity and scale next to the threat facing Palestinians living under occupation, in exile, or both. We cannot undo the decades of trauma inflicted on the Palestinian people as a result of violent ethnonationalism. But at this moment, those of us who are not Palestinian can de-center our own feelings and center the work of Palestinians fighting their oppression.

Yaniv Goren is a junior in Columbia College majoring in linguistics. Eve Glazier is a sophomore at Barnard majoring in American studies. They are both members of Columbia University Apartheid Divest.