Stand for justice, stand for Palestine

Stand for justice, stand for Palestine 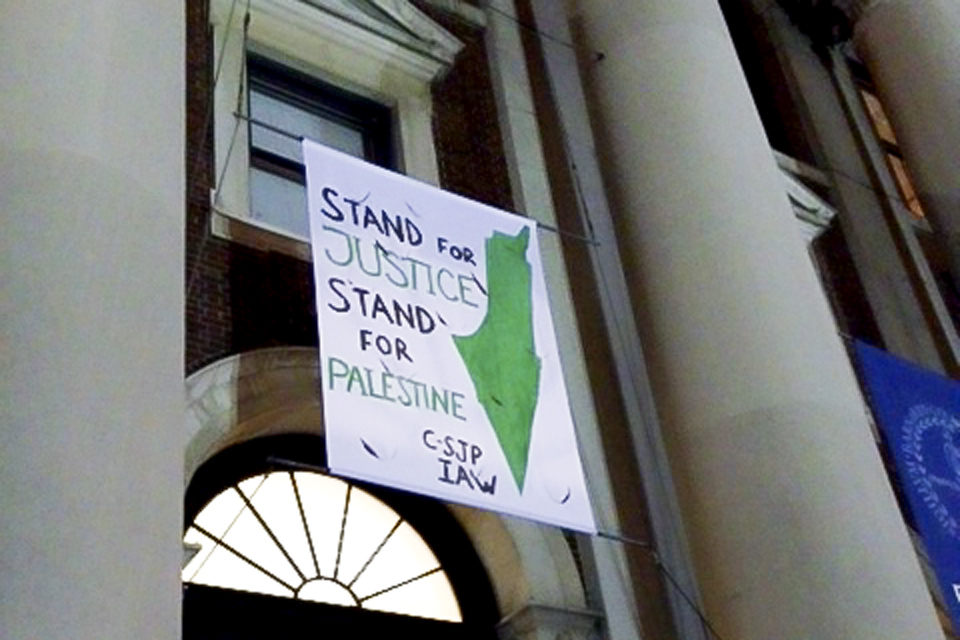 Students for Justice in Palestine's banner, pictured here, was taken down soon after it was put up.

On November 24, 2019, Columbia University Apartheid Divest—a coalition between Columbia Students for Justice in Palestine and Jewish Voice for Peace—presented the Columbia College Student Council with an appeal to place a question on the upcoming ballot enabling the student population to vote on if the University should “... divest its stocks, funds, and endowment from companies that profit from or engage in the State of Israel’s acts toward Palestinians that, according to Columbia University Apartheid Divest (CUAD), fall under the United Nations International Convention of the Suppression and Punishment of the Crime of Apartheid.” The ability to put the question on the ballot was passed in CUAD’s favor; however, the vote itself was delayed due to the COVID-19 pandemic that shut down campus in March and will instead be held this week.

Two years ago, CUAD brought forward a similar referendum that was voted on at Barnard. Once the question was put on the ballot, the student body voted in support of divestment from companies that profit off of and are complicit in Israeli human rights violations. I hope the same precedent will take place this week at Columbia.

Divestment as a strategy has historically been used as a critical tool for standing against injustice by demanding the removal of institutional complicity in the direct harm inflicted on individuals. The investments an institution or corporation holds largely reflects the environment and social fabric that is being cultivated in the shared space it produces. As members of the broader Columbia College community, it is crucial to understand that the space taken up by this University is not limited to its campus, but rather directly impacts the lives of those elsewhere. Columbia’s investments in certain companies that have effectively endorsed the dispossession and subjugation of Palestinians through their work with the Israeli government underscores how connected we are to enabling the oppression of Palestinians.

At the basis of our referendum is a demand that Columbia remove its holdings from companies that are actively engaging in harm against Palestinians. The eight companies we have laid out in our divestment proposal highlight some of the most egregious acts of violence that actively aid the Israeli government in maintaining its system of control and the dispossession of Palestinians.

War-profiteering companies such as Elbit Systems —which proudly advertises its products as field-proven on Palestinians— have constructed the surveillance sensors that surround the illegal apartheid wall, which effectively ghettoizes Palestinians.

Companies such as Lockheed Martin and Boeing are contracted by the Israel Defense Forces and have engaged in well-documented human rights violations in the Gaza Strip. Lockheed Martin is one of the biggest beneficiaries of U.S. military aid to Israel.

Hewlett Packard develops, supplies, and maintains the segregated biometric identification system used at IDF checkpoints in the occupied territories. The technology produced by HP is additionally used by the Israeli National Police, which controls security in the illegal settlements and is also known to arbitrarily raid and arrest Palestinians.

Mekorot, the Israeli national water company, practices water apartheid—wherein water resources are actively being diverted from Palestinian territories to meet the needs of settlements.  Palestinians have access to 70 liters of water per day per capita. The World Health Organization recommends 100 and Israelis receive 300. During droughts, Palestinian water access is further restricted.

The presence of divestment proposals like the one being presented this week represents an undeniable shift in the growing international movement that has heeded the call for Palestinian solidarity. Here on our very own campus dozens of progressive student organizations have endorsed our campaign with many citing the intersectional nature of the battles we are fighting; just as our oppression is interconnected, so is our solidarity with one another.

Voting in favor of this ballot initiative demonstrates a commitment to the voices of the student body—voices that are increasingly affirming the Palestinian struggle for justice and liberation. Our institutional holdings make us, as students, complicit in Israeli apartheid and such ubiquitous violations demand our concern and action. It is for these reasons that we ask the Columbia College student body to consider including Palestine as part of one’s moral compass when deciding to vote this week.

Ibtihal Malley is a junior at Barnard and a member of Students for Justice in Palestine. She has been involved with CUAD’s campaign since her first year on campus and urges Columbia College students to vote “yes” to divest from companies that profit off of Israeli apartheid from September 22 to 25.