The revolution will not be in Columbia blue

The revolution will not be in Columbia blue 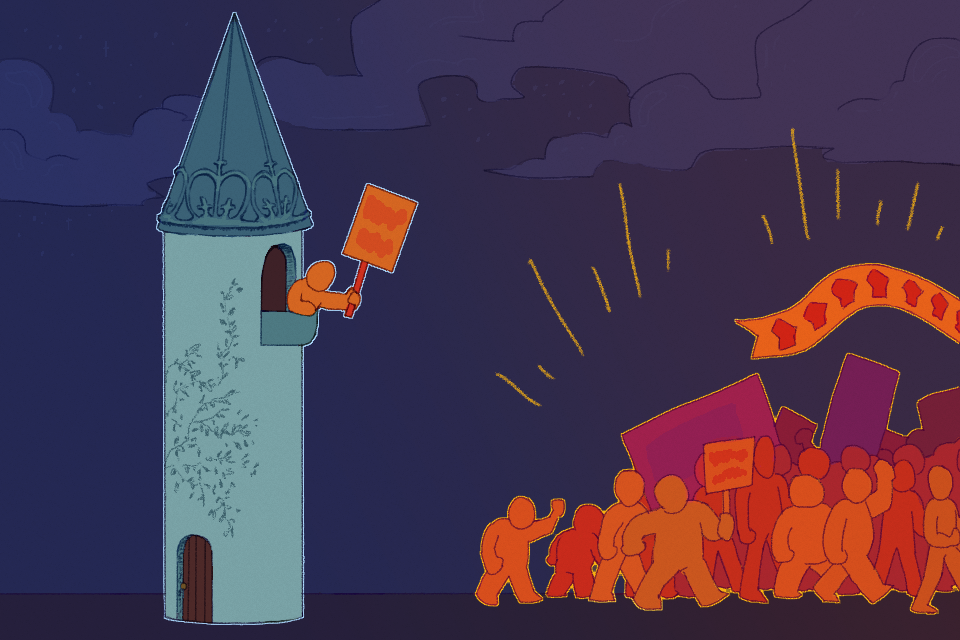 During a chat about Black Lives Matter protests, the declining economy, and the United States’ failing response to the COVID-19 pandemic, a fellow Columbia student and I concluded that only revolutionary change can dismantle extreme systemic inequality. Though our conclusion was unsurprising given the progressive spirit of many Columbia students, known for our protesting and political activism, we disagreed on who should lead the fight. They cheerfully proposed someone like me, a low-income woman of color. I disagreed and responded that we should be suspicious of any revolution led by a Columbia student.

Though many students like myself are marginalized, it is important for us to acknowledge how being at Columbia puts us in a unique position of privilege. Angela Davis expressed similar sentiments when she visited Columbia for a discussion with the African American and African diaspora studies department, as she asserted that college students like us should not assume that we will be leaders of this work given the histories of the institutions they attend.

Columbia’s history, prestige, and wealth dictate why many students chose to go here. With all its superlatives, Columbia is a cornerstone of the very systems we criticize and has been a part of some of the darkest parts of American history. The University has played a role in the displacement of Native Americans, the enslavement of Black people, exclusion of Jewish people, marginalization of women, and discrimination against Asians. Columbia’s very namesake is Christopher Columbus, a colonizer who brought the first African captives to the Americas in addition to precipitating Native American genocide and land dispossession. Our enrollment in this institution thereby precludes us students from being at the forefront of conversations of radical change, seeing as we actively uphold systems of inequality by being students at Columbia.

The University welcomes and chooses students who will be successful in a traditional sense. This is why many former students go on to become the very presidents, senators, businessmen, and bureaucrats that unwittingly help ensure Columbia’s longevity by reinforcing its prestige. The success that Columbia students are expected to obtain further upholds the systems of inequality that benefit the institution. Success is measured by these institutions within a paradigm of systemic inequality—high paying salaries, positions of traditional and recognized power, prestigious awards. At Columbia, we aren’t taught how to be revolutionaries, only how to be successful in the unequal systems we already exist in. At most, we are taught how to humbly reform, not radically reconstruct. It would be counterintuitive for Columbia to produce revolutionaries because a revolutionary’s goal is to dismantle the systems of oppression. However, it is these very systems of oppression that keep Columbia’s lights on. It is the wealth inequality in the United States that allows Columbia to charge the highest tuition in the country. It is the racism and classism that Columbia weaponizes to drive out residents of Harlem to expand its campus. In the words of Audre Lorde, it would be foolish to believe that the “master’s tools” of prestigious university education could ever dismantle “the master’s house” of systemic inequality.

Generally progressive policies that do not require radical systemic changes, however, are welcomed by the University. For example, despite the uncertain outcome, Columbia is currently in talks with its own graduate student workers who are demanding fair compensation and protection. Columbia has also pioneered many programs to discuss historic anti-Black injustice, especially in light of this past summer. Even so, Columbia fails to properly acknowledge and redress the harm it enacts on neighboring Black communities today.

As soon as students accept admission to Columbia, we are accepting our place in an unequal system. We chose Columbia because of the value it holds in this deeply unequal system; even with the best of intentions, we will benefit from its inequality. We benefit from the shiny brand name that Columbia offers only as long as it exists in an unequal and exclusionary system. The appeal of Columbia is that not just anyone can get in: If it was as accessible as a local community college, the importance of the degree would decline. Once we walk across the Columbia stage, we are bound to this place and our ability to be at the forefront of revolutionary work is compromised.

Those who are interested in radical thought should be prepared to listen to folks outside of positions of power and influence, such as marginalized people without a college degree who engage in mutual aid or fight for their rights inside of prisons outside of academia. The part of radicality that seeks to dismantle systems of inequality requires us to relinquish the privileges that an unequal system grants us. Revolutionary work means letting go of Columbia blue, but how many of us are ready for that?

Kwolanne Dina Felix, CC ’22, is an ambitious student organizer, historian, and Passion Planner enthusiast who lives at the intersections of sexual identity, gender, race, immigration status, and class and holds a lot of opinions about them. She studies history, the African diaspora, and is a project assistant for the Racial Redress Network. She is the founder of the Inclusion and Diversity Task Force of the Columbia College Student Council and loves advocating for policies to support marginalized students. Her column, She’s Gotta Say It, runs every other Sunday.