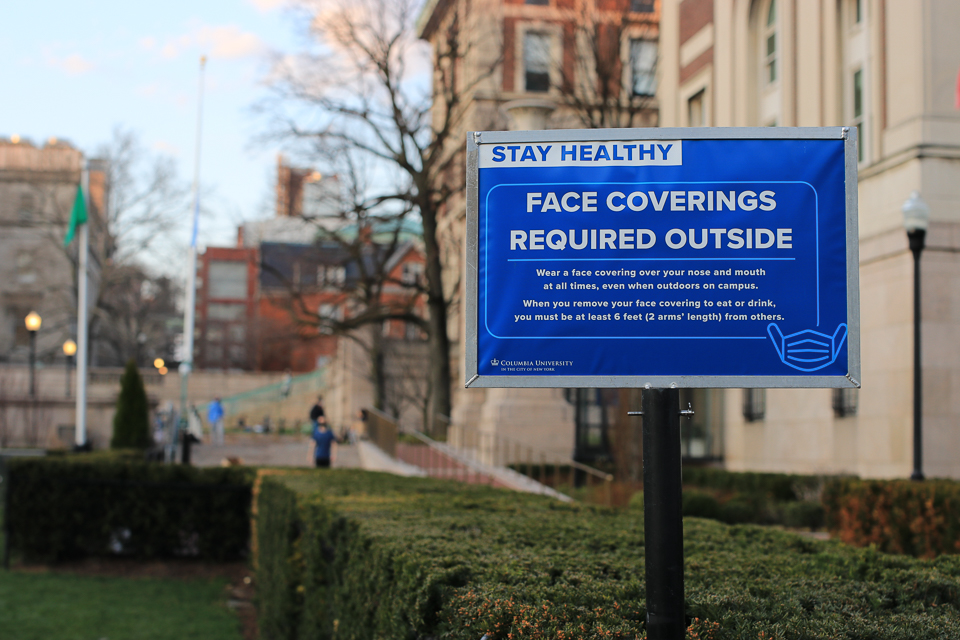 If you have spent any time on Columbia’s campus over the past year, you have probably seen the ubiquitous blue signs that read “Report a Health & Safety Violation” alongside a QR code that links directly to the Student Conduct and Community Standards website. Since the COVID-19 pandemic began, Columbia has utilized a number of evidence-based strategies in pursuit of a COVID-19-free campus, formalized in its Community Health Compact: mandatory twice-weekly PCR testing for students living in residence halls, wastewater surveillance, and, of course, limitations on which students can live in campus housing. The crux of the University’s plan, however, has been the requirement for all students to wear masks and keep physical distance between others at all times, including those with whom they share living spaces. The only exception is when eating or in a private room with the door closed. Accountability for following these policies is, in some ways, reliant on students filing anonymous reports on their peers to Student Conduct and Community Standards. This method seems ineffective and diffuses accountability in a way that often leaves students feeling conflicted. Undergraduate students should not be expected to be the first line of defense against this invisible enemy when the University is ultimately responsible for where and how students are housed.

When Columbia announced in December that, despite an exponential increase in COVID-19 cases nationwide, it would be opening up additional housing for the spring 2021 semester, many wondered how these incoming students could be housed safely. This worry was exacerbated when Columbia put many students in Hartley Hall, which is set up for suite-style living: 10 or more students might share one restroom, one kitchen, and one common space. As many students reading this may already know, by late January, Hartley Hall quickly became the site of a COVID-19 outbreak. Despite multiple requests each week from administrators to report our peers for violating health policies, suite after suite was traced and quarantined. According to surveillance testing data from the University, Columbia’s positivity rate reached its apex of 1.13 percent between January 18 and 24. At a fundamental level, the Hartley outbreak erupted due to the University’s inability to establish conditions where students reliably can and do follow restrictions.

To be sure, widespread masks, testing, and physical distancing are all tried and true methods of reducing the spread of an airborne respiratory virus. And while not every student follows every public health guideline at all times, Columbia students, by and large, do understand and accept that the pandemic is a real threat to human life and safety, and have gladly made many sacrifices to keep it at bay. When on-campus housing and hybrid classes for fall 2020 were abruptly canceled last August, students hunkered down and proceeded right into a fully virtual school year. Of the students who were able to live on campus for the year, many have spent time and energy reminding their peers to continue wearing masks and socializing from a distance. The Hartley outbreak reminded us, however, that student effort is not enough to keep our community safe, especially as gaping holes in the system become apparent over time.

Indeed, if Columbia had simply chosen to house fewer students per suite, a pod system that would have allowed for maskless and non-distanced socialization among suitemates may have been possible, allowing not only for reduced risk of COVID-19 transmission, but also for deeper friendships and connections to form. Other institutions such as Williams College have already implemented pod systems to allow for at least some regular social interaction among small groups of students. Nevertheless, Columbia forwent this possibility and instead, opted for an assumption of zero unmasked and non-distanced contact between students, the noble intents of which have not been borne out.

As a student who lives in Hartley and whose suite was put under quarantine, first during the January outbreak and now, again, in April, I feel like I have lost some trust in my University. Hartley Hall’s layout promotes social interaction, but the University ignores basic human behavior with its expectation that students will report the people with whom they must live for an entire semester or school year and subject their peers to potentially harmful marks on their academic records. The well-meaning, though paternalistic, guidance from the University to “Keep the Compact” and report peers for each and every violation thus means little in the face of skyrocketing positivity rates and endless contact tracing. As a result, students have been pit against each other in an endless Olympiad of virtue signalling, eroding what little community is left on campus with each passing day. Columbia students expect that their University will keep them safe on campus, as well as protect surrounding communities. But when we give up nearly every opportunity for community in this pursuit and reap no safety benefits, something has gone amiss.

Henry Astor, CC ’24, believes the Columbia Community Health Compact is very good at breaking down community relations and not so great at stopping COVID-19.

To respond to this op-ed or to submit your own, contact opinion@columbiaspectator.com.