When there was Columbia blue

When there was Columbia blue 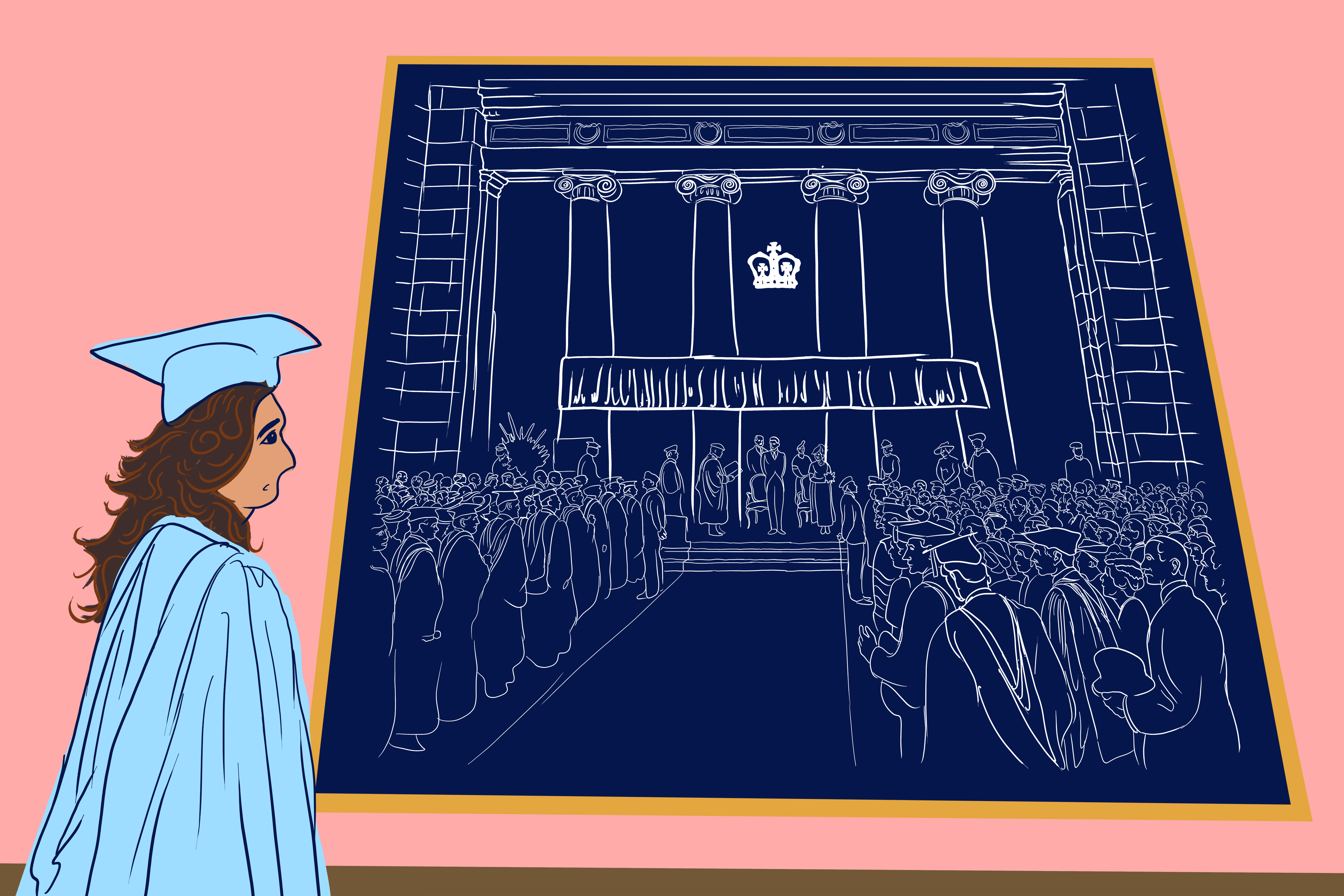 As I walked into Butler Library a month before my graduation, I saw a fellow senior dressed in Columbia blue, posing for pictures outside Ref. 301. She stood in front of the wall-length canvas that memorializes King George VI and Queen Elizabeth’s stop at Columbia on their 1939 North American tour. Long after the graduate left, I stared at this painting. I had passed by it hundreds of times without ever caring to look. Now, having just seen the senior dressed in Columbia blue, I was able to see the University’s colors throughout the canvas for the first time. From the carpets to the curtain, the painting shows the interior of Low Library covered in blue. Their royal highnesses take center stage. Embroidered onto the curtains, the University’s crown insignia hovers like a halo.

According to a New York Times report, the ceremony lasted all of 15 minutes before the royals drove away in their motorcade. Yet these royals, who were strangers to Columbia, are memorialized on our campus.

One detail in the portrait held my attention. Every head in the audience is turned in unison toward the royals on the podium. Their presence, embodying Columbia’s origins, merges the audience into a single entity. I don’t think this is just a painterly trick; in observance of the ritual, the audience is equal and whole, if only for a moment.

Seen from the present, the scene verges on absurd. However, I also saw reverence for community on the canvas: The figures had come together as a University. Simultaneously, I was reminded of the absence of a collective in-person Commencement ceremony for the class of 2021—an irrevocable loss. We may never have the opportunity to come together again and focus our attention entirely on what we’ve accomplished at Columbia and how we’ll take these experiences forward into the future.

Graduation ceremonies that bring students together hold a rare power to make us a unified group. Wherever the graduates come from, whatever honors they’ve been bestowed, they all wear Columbia blue. In shared regalia, they stop to watch peers, strangers, and friends cross the stage to a new life. Even if enforced by social convention, I see a profound humility and respect in this act of witness.

I once thought of Columbia blue and the crown insignia as empty symbols of power. Now, I realize it is in these collective moments, such as graduation, that we claim these symbols as our own. Columbia may have placed the painting outside Ref. 301 to highlight its own story, a complicated one riddled with injustices, from its birth with the British crown to its illustrious present as a preeminent global university. But the members of a crowd, united, can make these symbols into something more than a mere expression of power.

Every member of the class of 2021 has a unique Columbia origin story that culminates in the absence of Columbia blue. With a virtual graduation, we won’t have our moment of community as our paths merge—nothing to remember our present together or to celebrate our past. There will be no moment of shared remembrance of our late nights in Butler library, lunches by Alma Mater, or the perennial moments when the Christmas lights come alive along College Walk.

I believe many of us share the strange desire to say goodbye not just to classmates who will remain in our lives but also to familiar faces we never got to know. Sometimes I find that it’s the familiar stranger, who shares my favorite study room or hour to go to Dodge Fitness Center, whose presence has grounded my sense of belonging. They remind me that I share this campus with the many, not just the few. Only in the presence of those who shared our journey can we confirm that Columbia blue is not just royal, but also ours.

Jacob Mazzarella is a senior in the dual bachelor’s program between General Studies and Sciences Po studying political science.

To respond to this column or to submit an op-ed, contact opinion@columbiaspectator.com.