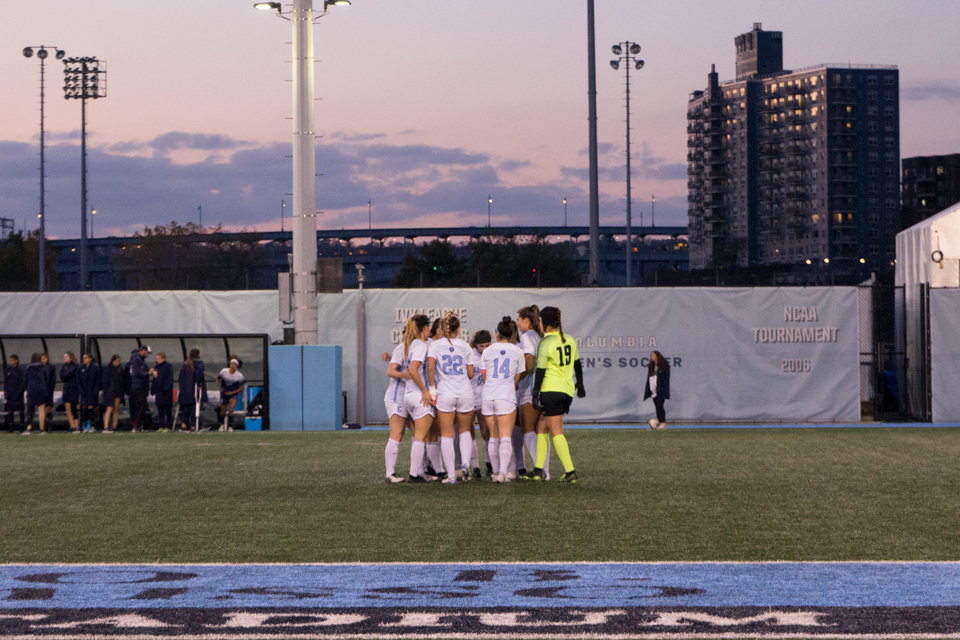 The women’s soccer team form a huddle to discuss their game plan.

When members of the Columbia women’s soccer team laced up their cleats for their 1986 season opener at the Seven Sisters’ tournament at Bryn Mawr, what might now seem like a typical start to the year was actually a historic moment for the team. The team took to the field for the first time as recognized varsity athletes, only three years after Columbia became coeducational. However, the Lions’ quick victory that day was not an omen for early success.

The women’s soccer team began like any other at Columbia: as a small, slightly disorganized group of people with a common passion for sports. For the Light Blue’s first two years, the athletes hardly knew each other’s names, as the commitment level was minimal. This all changed in 1985, when the club gained “club varsity” status—a title that refers to a team that plays by varsity regulations but still lacks the recognition and financial support varsity teams receive from the University. Under coach Bill Wilkins, the Lions did not immediately adapt to the increased demands of a higher-commitment sport. They started their season with a six game losing streak that was not broken until the final games of the season. At this point, the team was finally getting its feet underneath it, and the brief taste of victory urged the Lions to seek official varsity status.

What makes a varsity team different from a club one? Obvious answers include uniforms, gear, increased funding, and other generic perks for athletes. One impactful, yet often overlooked, advantage is the introduction of recruited athletes. Wilkins wasted no time in utilizing this advantage when he brought first-year Kristin Friedholm and three other recruits in for the 1986 season.

Fueled by the excitement of a new varsity title and recruited teammates, women’s soccer charged full force into the 1986 season. At the same Seven Sisters’ tournament, the crew took third place, making a leap up in rank compared to their sixth place finish the year before. This energy also led them to tie with Yale and only lose to nationally ranked Harvard 1-0 in the following weeks. In this initial period of success, all eyes were on Friedholm. She did not disappoint.

As a member of the first recruiting class for the women’s soccer team, Friedholm had both big shoes and no shoes to fill at the same time. The pressure of her position combined with her appointed trailblazer status did not seem to rattle her, and from the moment she first stepped foot on the field, Friedholm was starter material.

“I didn’t expect to do this well. I just thought I would play my best,” Friedhold said in a 1986 interview. In fact, she did so well that she became a starter all four years at Columbia, achieving second-team All-Ivy status for three out of those four years. Friedholm even held Columbia’s career goal-scoring record until 1997, seven years after she graduated. As an emblem of the team’s ascent to varsity status, she represented a hopeful future for the program. However, Friedholm’s individual success was not a direct reflection of the team’s success.

The inaugural varsity women’s soccer team failed to clinch wins after early successes in the season. Consecutive losses brought the team to a final record of 4-9-1 for the fall 1986 season, last in the Ivy League. In 1987, the Light Blue went the entire season without a single Ivy win. To top it off, Wilkins announced his resignation in February of 1988. It seemed as though the program was losing its drive to establish its authority as one of the first women’s varsity teams.

The athletes remained dedicated to maintaining a united front despite this low. Friedholm, along with teammates Tracy Heisler, CC ’90, and Lynn Murphy, CC ’89, responded to a critical piece about Wilkins with an article in defense of their ex-coach. “Team disunity,” they wrote, “is not solely the fault of Wilkins’ coaching methods. The players themselves are responsible for much of the existing factionalism.”

There would have to be changes to the internal team dynamic in order to build up the program. There was also the timeless issue of women’s sports having less funding than male sports, as well as drastically smaller turnouts at women’s sporting competitions. The soccer team had come far in achieving its varsity status, but there were barriers to its success beyond a lack of chemistry between teammates.

Between the early, abrupt change in coaches and the rapid rise to varsity status, women’s soccer could not catch a break. Their tumultuous origin stands in direct contrast to the state of the team today.

The 2019 season boasted a 9-3-4 record and only one loss in the Ivy League. Tracey Batholomew, the current head coach, became the first women’s soccer head coach to achieve four straight winning Ivy League records between 2016 and 2019. Five athletes also achieved All-Ivy recognition in 2019. The team’s overall success has produced individual stars as well. Amalya Johnson, much like Friedholm, was named All-Ivy all four years as a Lion, making the first team in her senior season.

This steady rise has made the program much more competitive with the rest of the Ivy League now than it was in its first few seasons. Despite the uncertainty of the original team, women’s soccer has managed to outlast adversity to make it one of the longest standing women’s sports teams at Columbia.