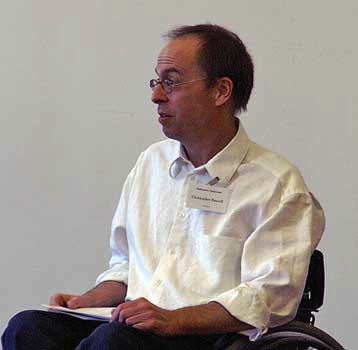 It's Barnard Staff Appreciation Week! In honor of the working people who make the college what it is, Spectrum will be having a special spotlight on Barnard faculty, staff members, and administrators this week. First up: Professor Christopher Baswell.

Christopher Baswell is an English professor at Columbia University. He is one of only a few professors who teaches both undergraduate students at Barnard and doctoral students at Columbia. Professor Baswell has been at the University for over 20 years, so in honor of Staff Appreciation Week, I sat down with him to talk about his time at Barnard.

Hannah Corrie: Tell me a little bit about how you came to be a professor at Barnard.

Christopher Baswell:  I did my doctoral work at Yale, and then I got this amazing job at the University of Geneva. But while I was there I learned of myself that, while I'm a competent linguist, I don't have the kind of language skill where the veil is ever going to drop, so I knew I was never going to have a fully naturalized life there. Also, Geneva is one of the most boring cities. It's very clean and well run, but it is so dull. ... So I went on the job market and I was lucky enough to get Barnard's offer. I was at Barnard for about 16 years, and then I got an invitation to go to UCLA. ... I was there for seven years, but I missed New York a lot, and I missed the adventurousness  of Barnard and Columbia students. UCLA students are just as smart as Columbia students, but they're more professionally oriented. ... Then the opportunity arose for this kind of dream of a job where I would work half at Barnard, half at Columbia, so now I spend half my time teaching undergraduates and half my time with doctoral students.

HC: As I'm sure you know, this year marks Barnard's 125th anniversary. Obviously Barnard has undergone a lot of changes since then, but in your time here, what has been the most surprising change?

CB: When I first came here by '84, I wondered, if by the end of my career, Barnard would still be a single-sex institution. But what I didn't know was that Barnard was under considerable threat—my understanding is that back in the '70s at some point, Columbia had hoped to simply absorb Barnard. ... But unlike most of its sister institutions, Barnard said no. Columbia more or less expected that Barnard would just wither on the vine. ... And indeed, I believe that in the mid-'80s, Barnard admissions did take a dip. And I think that once the excitement passed about all the schools going coed, that need rose again for a woman's college. People realized that just having students on the same campus doesn't mean that education is addressing itself to what continues to be complicated disparities. ... So our very survival has been a little bit of a nice surprise.

HC: What has been your best experience as an English professor at Columbia University?

CB: It's very nice when I see students follow in my footsteps and go and get Ph.D.s. There's a student I had—now she's a tenured professor at the University of California Riverside. ... And I'm teaching a doctoral student now who started doing his MA as a student of my student. That's very interesting, teaching people a generation on from people I've trained.

HC: What do you think Barnard students would benefit from knowing?

CB: I wouldn't want to add another thing to the Nine Ways of Knowing—because I think it's already about six ways too many—but I don't think students should be able to graduate without being able to write basic code. ... They should be able not only to navigate a website, but to have a conceptual understanding of how that site works. Because increasingly, as they become more sophisticated, websites control our ways of knowing in fashions that we are less and less aware of. ... So it's really something that's important for all students to know, but particularly Barnard students, because everyone's heard the story of how few women there are in computer science. As a gender, women are both being pressured to and allowing themselves to be pressured to be opted out of this enormously important way of knowing.

This interview has been edited and condensed for clarity.