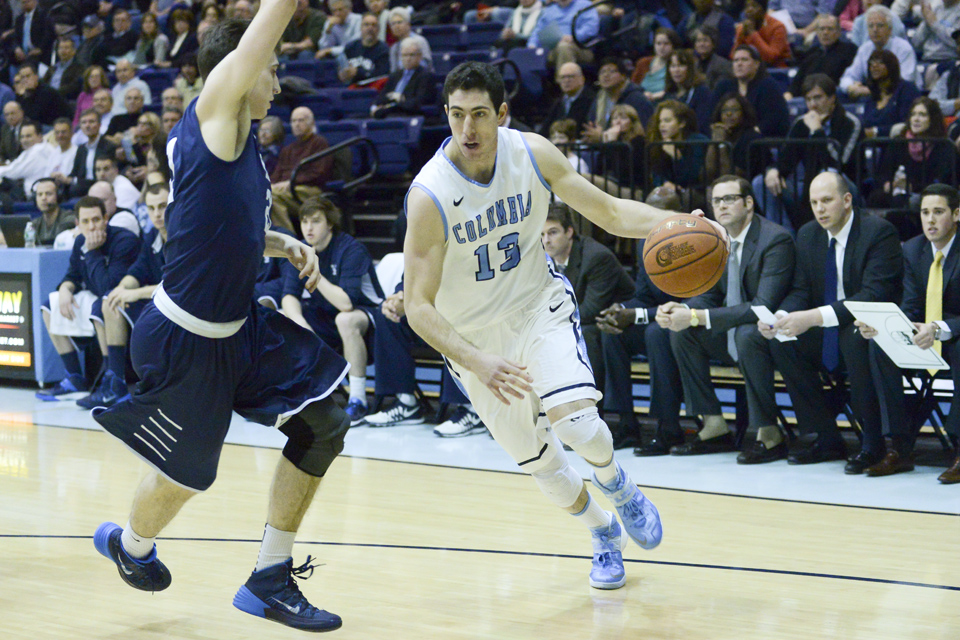 UPDATED: It was announced today that Rosenberg has withdrawn from school and will not compete in the 2014-15 season. My mom has released the following statement:

He needs you now more than ever. Will he be living at home? I can fly into Scarsdale, Westchester or any of those exotic locales and make chicken soup. He'll have a lot of spare time this year. Tell him I recommend "The Good Wife," or see if he'll start studying for the LSAT or the MCAT.

Last winter, to escape the harsh Canadian cold, my parents came down south to New York City for the weekend. I invited them to watch a Columbia basketball game at which I was playing bass drum in the stands with the Columbia University Marching Band. Instead of marveling at my newfound "musical ability" or at the cleverness of CUMB's cheers when I reconvened with her after the game, all my mom could talk about was a certain number thirteen on the Columbia Lions, Jewish celebrity Alex Rosenberg.

Now, I have never met Mr. Rosenberg—I am sure he is a nice guy, but according to my mom, we're engaged. While this is extremely creepy, it is also quite hilarious, so upon learning that Rosenberg was injured, I reached out to my mom for comment (for the full effect, read this with a New York accent. Even though she's from Kitchener, Ontario and not Long Island, the New York accent will give it peak Jewiness):

“Oy, what a shame, I’m sorry that he’s injured. When I imagined him hurting his foot I dreamed it would be from him stepping on the glass at your wedding. Maybe now that he is injured he’ll have time to JDate?That Alex Rosenberg is a CATCH. Jewish, smart, and athletic. You usually have to pick two of the three. Your father is Jewish and smart. Turns out that watching all the sports doesn’t make you good at playing the sports. Imagine, if he turned all that energy he uses following the Leafs to actual athletics, he’d be on the Leafs. The team hasn’t won the Cup since ‘67, I’m sure they’d take an old shmuck. And oy, when you see your father, please ask him about his exercising. He’s obsessed with that FitBit but I don’t know if it’s done anything. Remind him to take care of himself, I want him to be around to walk you down the aisle.Back to Rosenberg. What a mensch, that he chose number thirteen! It’s like the Bar Mitzvah! And I forgot to mention that he’s handsome. A buff David Schwimmer. I wonder if he’s been to Israel? Tell him he can come with us and stay with Auntie Lane! Or better yet, he should play in the Maccabiah Games!Have you met him yet? Is he in any of your American History classes? See if he likes history. Or movies! I’m sure he likes movies. Ask him if he wants to watch ‘Space Jam’! Or ‘High School Musical,’ there’s basketball in that. Wow, a band geek marrying the star basketball player. Now THAT’S a movie! Anyway, tell him to get well soon, and tell me when I need to book a kosher caterer.”

Thanks, Mom. Get well soon, Alex! We need you! (We, as in the Columbia community, not me and my mom. Oy.)