'Too Many Cooks': The subversion of expectation

'Too Many Cooks': The subversion of expectation 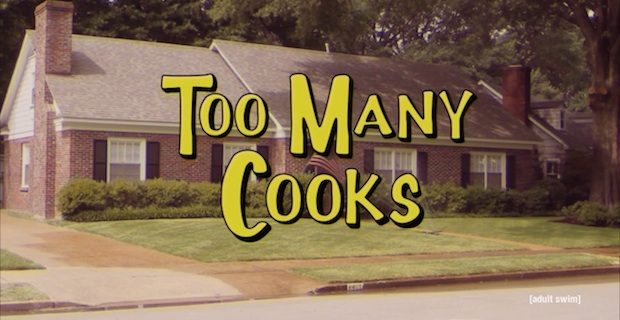 For those uninitiated: do not scroll down. Drop everything and watch this video without context.  Like, pick up a thing, drop it, and then press play.

We all have goofy childhood phobias.  Since the moment I watched "Rudolph the Reindeer" on VHS as a wee'un, face hidden behind sticky fingers as the eerie F.H.E. paintbrush swabbed its clumpy logo, I have been afraid of vanity cards. The 20th Century Fox fanfare could send me howling from a room, but worse would be when the logos would be tweaked, however benignly. The Dreamworks moon flickering into a horror-movie Ring and the THX sound recreated in cow sounds, though different in tone, are equally jibblies-inducing in that they both hinge on a fundamental quality: subversion of expectation. You settle into the couch, hear the familiar roar of the MGM lion and fully know what you're about to see—but all of a sudden the lion isn't in the window and then the frame starts leaking blood and the audio frays and you don't even know anymore.

Enter "Too Many Cooks," which takes that energy and relentlessly, exquisitely, jackhammers it into the temporal lobe. First of all, the premise ensures you can't wash it off. It follows you for days. You'll be sitting in your comparative lit class, discussing the intricacies of Goethe's "The Sorrows of Young Wer-"TOO MANY COOKS, TOO MANY COOKS. TOO MANY COOKS, TOO MANY COOKS.  Your expectation at eight seconds in—that the friendly, snappy-sounding intro will be just that—goes on to have a repeatedly larger hole kicked in it for 11 minutes.

What makes "Too Many Cooks" one of 2014's most indelible works of art is its ability to drag an audience through a profoundly warped variation on the Kubler-Ross stages—laughter melts from that of recognition to exasperation to incredulousness to confusion to anxiety to genuine fear, each stage kicked into gear with another shish-kabob-ing of expectations.  It's David Ives and the Wondershowzen gang in purgatory. It's the howl beyond the grave of every family sitcom pilot put down before its time. But what is it?

It's a party-joke-turned-project developed by Adult Swim writer Casper Kelly and Williams Street Productions.  The video—which originally aired at four in the morning during the network's "Informercials" block—hit two million views in less than a week, a fact which "gobsmacked" Kelly and editor Paul Painter, as they said in their Reddit AMA. The two—along with Adult Swim, who've housed renegades from Tim and Eric to Aaron Augenblick—are clearly ones to watch, with "Looper" director Rian Johnson tweeting that it "should be in the Oscar running for best short."  (Take that, "Paperman.")  Ultimately, it's refreshing that, in a landscape of internet fervor over visual burps, a thoughtfully-constructed jewel box like "Too Many Cooks" can float to the top of our newsfeeds...and our nightmares.