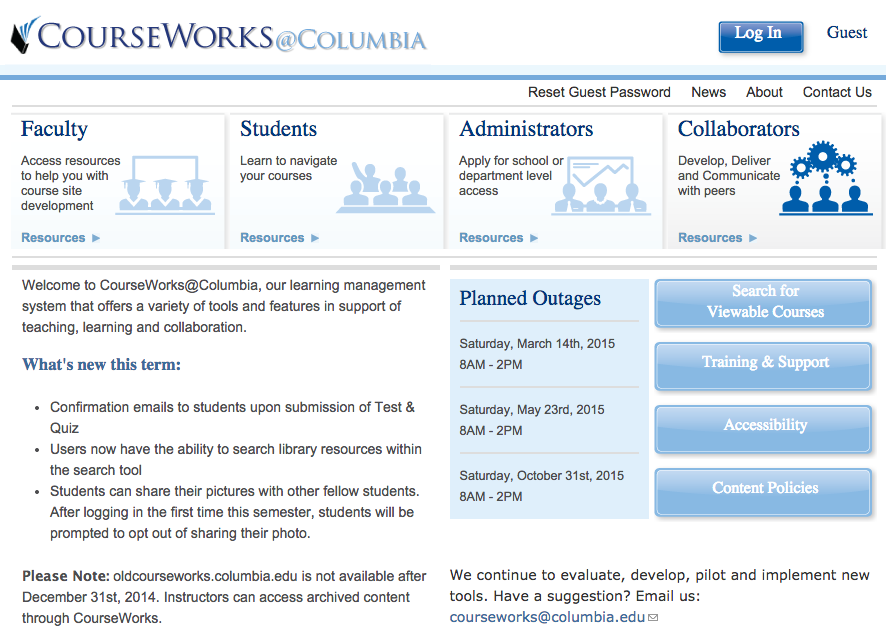 In her weekly series, blogger Rebecca Farley lends a platform to Columbia's unheard voices. This week, she spoke to the CourseWorks website.

CourseWorks, the virtual class bulletin board of Columbia, is pretty widely disliked. He crashes without notice, willfully signs you out if you lay dormant for a mere five minutes, and, in general, has one of the more confusing user interfaces among Columbia websites. Despite all this, he's a very gracious interviewee. When I arrive at his home to interview him on a frosty Wednesday, he ushers me inside, takes my coat, and offers me a madeleine. He's wearing a red-striped apron and cradles a mug of coffee to his chest as he speaks.

"French cookies, you know? Just made them," he says proudly, presenting a tray of seashell-shaped butter cookies. "Have a seat, have a seat! Coffee?"

We are in his kitchen, which resembles a Williams-Sonoma display in its perfection. The oven is gleaming steel and there are blue china plates arranged in an unfurling display in his cabinets. When I comment that the house is rather nice, CourseWorks blushes.

"Well, we did just have a renovation, maybe a year ago?" He looks around his kitchen. "Yeah, it was around the same time I went under the knife."

He nods excitedly. "You know, got a little face-lift. Just trying to keep young-looking in this digital age." He reaches for a madeleine and holds it delicately.

"There are demands to keep up with. Listen, I know I'm no DSpar here when it comes to popularity at this school." He rolls his eyes. "But I try, okay? My user interface has gotten a lot friendlier. And look! Now I make madeleines."

He pushes the plate of cookies towards me and I feel obligated to take one.

"I was a bit of a crank in my teenage years," he confesses. "I would just refuse to get out of bed, crash at all points of the day. Do you remember Fall 2012 when I crashed for, like, two days straight?"

"Yes!" It was my freshman year and I remember yelling at my computer screen.

"I was so hungover." CourseWorks laughs. "Ugh. I was such a kid."

When pressed about his personal transformation, CourseWorks really begins to open up. He takes off his apron, pours himself another cup of coffee from his French press and really gets into it.

"It's all about the strive to be better, you know? Always be better. Listen, my user interface went from a darkish blue to a pale, calming light blue. That's real work. That's personal transformation. I work so hard—" he pauses and puts his hand over his mouth as if he's going to cry—"I work so hard to bring ease and comfort into the lives of students. I care, I really do."

"Any feedback is helpful, really. I want so badly to—"

CourseWorks pauses in the middle of his sentence and stares at the wall behind me. There is a madeleine clutched in his hand.

After a minute or two of silence, I wave my hand in front of CourseWorks' face.

"Your session has timed out." A voice speaks from behind me. I spin in my seat, expecting to see a security guard, but there is no one there. "Please exit the premises or sign back into CourseWorks in Kent 741."

I do so, slinking out of the beautiful kitchen. I shove the tray of madeleines in my backpack before I head out—one never knows when a French pastry will be needed.

Rebecca Farley is a junior in the college studying the word "madeleine."